Discussing homelessness at the Ozanam Inn 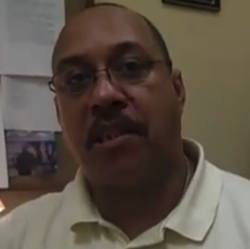 Last month, I sat down with my friend Clarence Adams Sr. to discuss the current state of homelessness in New Orleans, LA.  Mr. Adams is currently the Administrator at Ozanam Inn, a homeless shelter for men, where he has worked for the past sixteen years. In this video, Mr Adams discusses the definition of "homeless," and the way Ozanam works to make homeless people Whole from a holistic perspective, including programs that go beyond just serving meals.

This video was shot at Ozanam Inn in New Orleans LA.  I have known and worked with Mr Adams since 2008 on issues around homeless.  He helped me become more knowledgeable about what it will take to make one Whole.

Mr. Adams is a hands on individual.  He is the founder of the Forgotten Angels program, which sponsors a Christmas Party for hundreds of homeless children each year.  He is a lifelong resident of New Orleans and is committed to making this community a better place for all people to live.