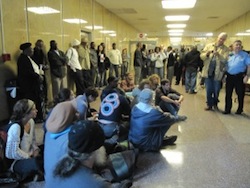 “This auction is illegal and immoral. It is a way to steal homes, redistribute wealth and prevent the right to return. The sale of blighted property is the city's attempt to remove poor homeowners who have already suffered tremendously from economic and natural disaster. Blight has become an excuse to gentrify. Charging poor homeowners outrageous fees in order to steal their homes is an underhanded way to keep people displaced. Stop capitalizing off of crisis! This process is corrupt! You are stealing homes! STOP NOW!”

The sale was scheduled to begin at noon. At approximately 1:45 pm, after several potential buyers had already left, the police arrived and threatened the nonviolent protestors with arrest. Before declaring that the remainder of their protest would be silent, the protestors announced their intention to physically defend any properties sold: “We will be in court. We will be in the streets. We will be in the houses--defending them, boarding them up, and occupying them.”

Protestors specifically identified two properties and successfully urged buyers not to purchase them. The Fight Back Center, a long-time community center in the St. Bernard neighborhood in New Orleans’ 7th ward was slated to be auctioned at today’s sale despite city personnel having acknowledged that there were numerous legal problems with the process. “This is community space and we will fight to keep it that way,” protestors declared.

The Fight Back Center is currently being redeveloped and rebuilt by Survivors Village, which began in 2006 as a tent city of public housing residents who were locked out of their homes after Hurricane Katrina.

Protestors also urged buyers not to purchase the home of an individual who had approached them to express thanks for what they were doing. The individual’s home had been completely renovated, but the city refused his offer to pay the $575 fine that had been assessed, refusing to waive the thousands of dollars in fines that accrued daily since the home was declared blighted. He was financially unable to pay these fees and thus faced loss of his home. Following the protestors’ declared intention to defend these properties, neither received a minimum bid and thus remained unsold.

Protestors also distributed flyers educating the crowd about the realities of the auction. The flyers declared:

“This is an auction of stolen properties. When a property in New Orleans is declared ‘blighted’ it is because homeowners are unable to complete the necessary work on their properties to comply with the city’s codes. The city gives the homeowner a fine of $575 and orders the homeowner to finish renovation or demolition of the property within thirty days and pay the fine or face additional fees of up to $500 per day. When poor homeowners are charged thousands of dollars each week—money they would put into their homes if they had it—the city leaves them no choice but to go bankrupt or hand over their properties. This is state sanctioned theft under the guise of 'recovery.'”

The protestors’ disruption at the Sheriff’s sale occurred less than eight hours after Occupy NOLA was itself evicted from their encampment at Duncan Plaza. Around 4 pm, Occupy NOLA was issued a temporary restraining order (TRO) by U.S. District Judge Jay Zainey who said he was "not happy" that the city opted to clear the camp while a motion for a TRO was pending.

Today’s protest was also carried out in solidarity with a call from Occupy Wall Street, who declared December 6 a day of action on the foreclosure crisis.