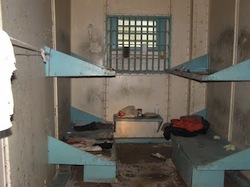 In a letter to the editors of the Times-Picayune this month, New Orleans resident Mona Castillo wrote that the key to decreasing crime is to make prison "less comfortable."  She wrote, "At the present time, jails are more like hotels.  Many prisoners live better there than they did on the outside."

"We are requesting an exception to the Times-Picayune policy that in order to be considered for publication, letters must be signed.  The member who wrote this letter has deep and legitimate fears that if her name were included, the relative who is in prison might experience retribution from the Sheriff or other prison staff.  Given the attacks on those who spoke out at recent forums regarding prison conditions, we hope you will agree that this fear is very real and legitimate and make an exception to your otherwise understandable policy.  We would appreciate a response from you regarding whether you are willing to waive your policy and consider publishing this letter."

The Times-Picayune did not publish that letter, and so we are publishing it here:

"As someone with a relative in Orleans Parish Prison, I challenge Mona Castillo’s opinion that jails are more like hotels, where the living is enjoyable.  For the last two years I have known OPP through a pre-trial detainee’s experiences, documented by our daily telephone calls, visits, and conversations with prison staff.  Orleans Parish Prison is a cesspool.  There is no air-conditioning and no heat, no maintenance is done on the buildings, showers are covered in mold. The only cleaning product available is bleach, which they use to scrub the walls in an effort to keep illness at bay.

"Inmates are overcrowded and have very limited access to medical care.  While they are supposed to be brought outside daily, they sometimes do not go in the yard for weeks or months at a time.  In OPP, there are no cell phones, connubial visits, weight rooms, or other amenities.  There are TVs, but they are shared, sometimes one for 40 or 50 men.  Breakfast is served at 5:30 a.m., followed by dinner at 9:30 p.m.  'White' meat is left in the open for them to eat at risk to their health during the rest of the day.  Cells are carpeted with roaches and rats.

"Perhaps the largest problem is the lack of safety. OPP detainees go for 5, 6, 7 hours without seeing a guard.  Being packed on each other like animals, treated like animals, and left unsupervised creates violence in the prison walls.

"Ms. Castillo is correct about one thing – OPP does not foster a decrease in crime.  On the contrary, the OPP environment breeds more crime.  These inhumane conditions lead to both an increase in crime within the prison and without – spilling the internal violence back on to the streets when detainees are released.  Even more unfortunate is the fact that many of these inmates have not yet been to trial, but are simply unable to make bail.  Where is the presumption of innocence?"

Photo of a cell in OPP from the Louisiana Justice Institute.

----------
Rosana Cruz is Associate Director of VOTE (Voice Of The Ex-offender), and a member of the Orleans Parish Prison Reform Coalition. Previously Rosana worked with Safe Streets/Strong Communities and the National Immigration Law Center. Prior to joining NILC, she worked with SEIU1991 in Miami, after having been displaced from New Orleans by Katrina. Before the storm, Rosana worked for a diverse range of community organizations, including the Latin American Library, Hispanic Apostolate, the Lesbian and Gay Community Center of New Orleans, and People's Youth Freedom School. Rosana came to New Orleans through her work with the Southern Regional Office of Amnesty International in Atlanta.