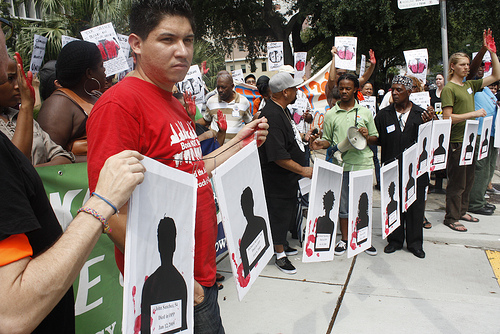 June 7th and 8th, more than 30 community groups in the New Orleans area and members of the national Right To The City Alliance held the “Urban Congress to End Criminalization of our Communities Now!” The Congress met at the Mahalia Jackson Community Center in New Orleans. Social justice organizations from the greater New Orleans area as well as cities in Massachusetts, New York, Florida and Colorado came together to work towards building a unifying force to end the criminalization of poor communities and communities of color, and to build solidarity across these communities. 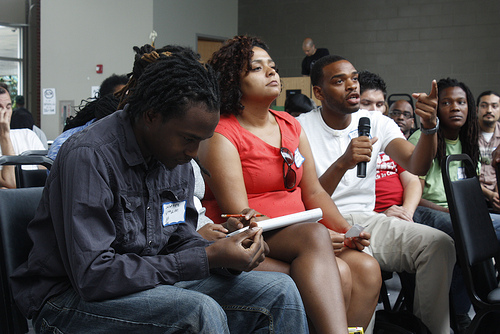 The Urban Congress included an action on June 7th, with a rally and press conference in front of City Hall and Immigration and Customs Enforcement (ICE) office. The protestors delivered written letters that implored Mayor Landrieu and the ICE office to, “stop criminalizing our communities! Let us live. Let us thrive.” Specifically, the protestors made two demands: for ICE to end the deportation of the “Southern 32”, undocumented immigrants who have been targeted for deportation because they stood up for civil and labor rights; and for the Mayor to release from Orleans Parish Prison (OPP) all non-violent municipal detainees (people in jail for low level municipal charges such as panhandling, traffic tickets, and marijuana first offense). They argued, “Because of the deplorable conditions and lack of leadership in OPP, these people are in imminent danger of being beaten, raped, stabbed, or possibly killed while in Orleans Parish Prison.” 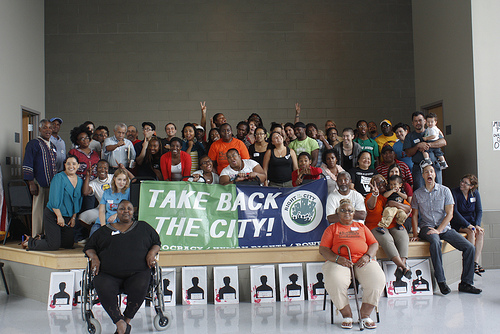 The Urban Congress was hosted by more than 30 organizations that fight for racial justice and human rights, including the Right to the City Alliance, Safe Streets Strong Communities, Family and Friends of Louisiana’s Incarcerated Children, V.O.T.E (Voice Of The Ex-offender), Break OUT, New Orleans Workers Center for Racial Justice, and the Orleans Parish Prison Reform Coalition.

All photos by Chelsea Grayson.

Chelsea Grayson is the newest addition to the Bridge the Gulf team serving as a summer intern. In May she graduated from Tufts University with a major in English and a minor in Media Studies & Communications. Originally from New York, New York Chelsea's interest has been to use media as a way to tackle issues of social justice, specifically race & ethnicity.