Ashley Alleman and her husband knew something was wrong months ago. Amid reports of unexplained bubbling in nearby Bayou Corne, they’d been feeling 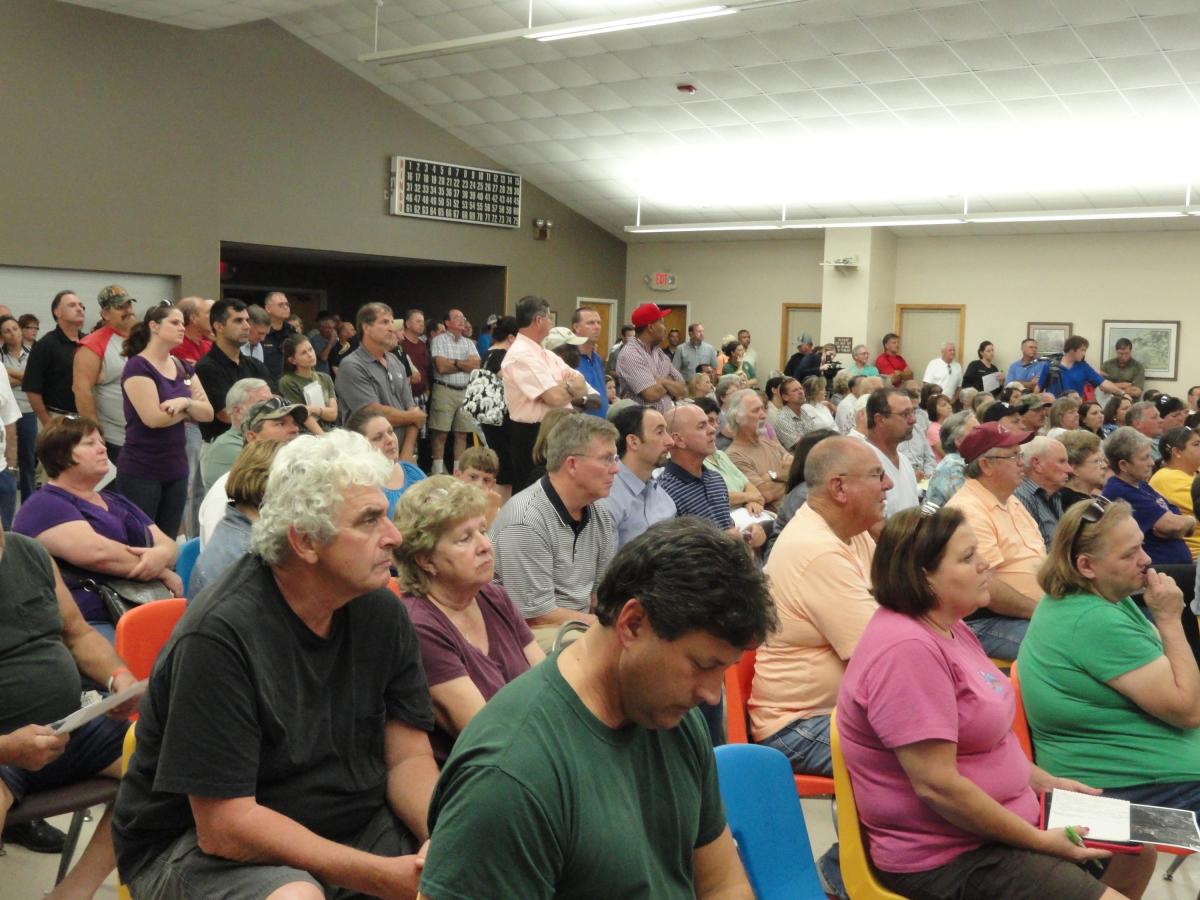 strange rumblings beneath their home, rumblings they’d never felt before.

Initially the Allemans and other community members who felt the same tremors were met with disbelief. According to Ashley, Joseph Ball, the Director of the Louisiana Department of Natural Resources Department of Injection and Mining, even suggested it was heavy trucks traveling down nearby Highway 70.

When a massive sinkhole/slurry area opened up in the wee hours of Friday, August 3rd, Ashley’s husband told her to call Mr. Ball.  “Tell him his truck just landed in the bayou.”

In addition to the tremors, bubbling indicative of leaking gas was discovered in Bayou Corne. Residents say the bubbling was first reported to officials on May 30th. Repeated calls to officials initially got very little response.

Eventually, the US Geological Survey was called in to monitor the tremors and the  Department of Natural Resources (DNR) and Department of Environmental Quality (DEQ) were instructed to test the gas bubbles and to fingerprint the gas for a possible match to one of the several pipelines under the bayou.

Initially, a pipeline leak was suspected, as was leakage from an abandoned well in the area of the bubbling. Acadia Gas depressurized two local pipelines, but the bubbling continued.

Then, on August 3rd, residents were awakened by a powerful diesel smell, strong enough to cause headaches and nausea. A “slurry” area, also described as a sinkhole, had opened between Bayou Corne and Grand Bayou. Officials who flew over the site reported trees had collapsed in what was initially reported to be a 200  ft by 200  ft area. Estimates now say the area is closer to 372 feet in diameter and 422 feet deep.

By the next evening, a test of a Crosstex pipeline in the area had determined the line had shifted. John Boudreaux, Director of Homeland Security and Emergency Preparedness for Assumption Parish, described the pipeline as, “what we call compromised, it sank 16 foot and shifted to the east 15 ft.”

As a result, Highway 70, the only route through the community, was closed in order to allow the pipeline companies to depressurize their lines, which was completed Sunday night and the highway reopened. Yet the bubbling continued, indicating the pipelines were not the source of the gas. Authorities have since determined abandoned wells in the area are also not the source.

If the abandoned wells or the pipelines aren’t the culprit, where is the gas coming from?  What caused the massive sinkhole/slurry area?

The Allemans  and their neighbors came to last Tuesday night’s meeting, held by State and Local officials, to get some answers and hoping for reassurance that their corner of paradise wouldn’t explode or be swallowed into the earth like the 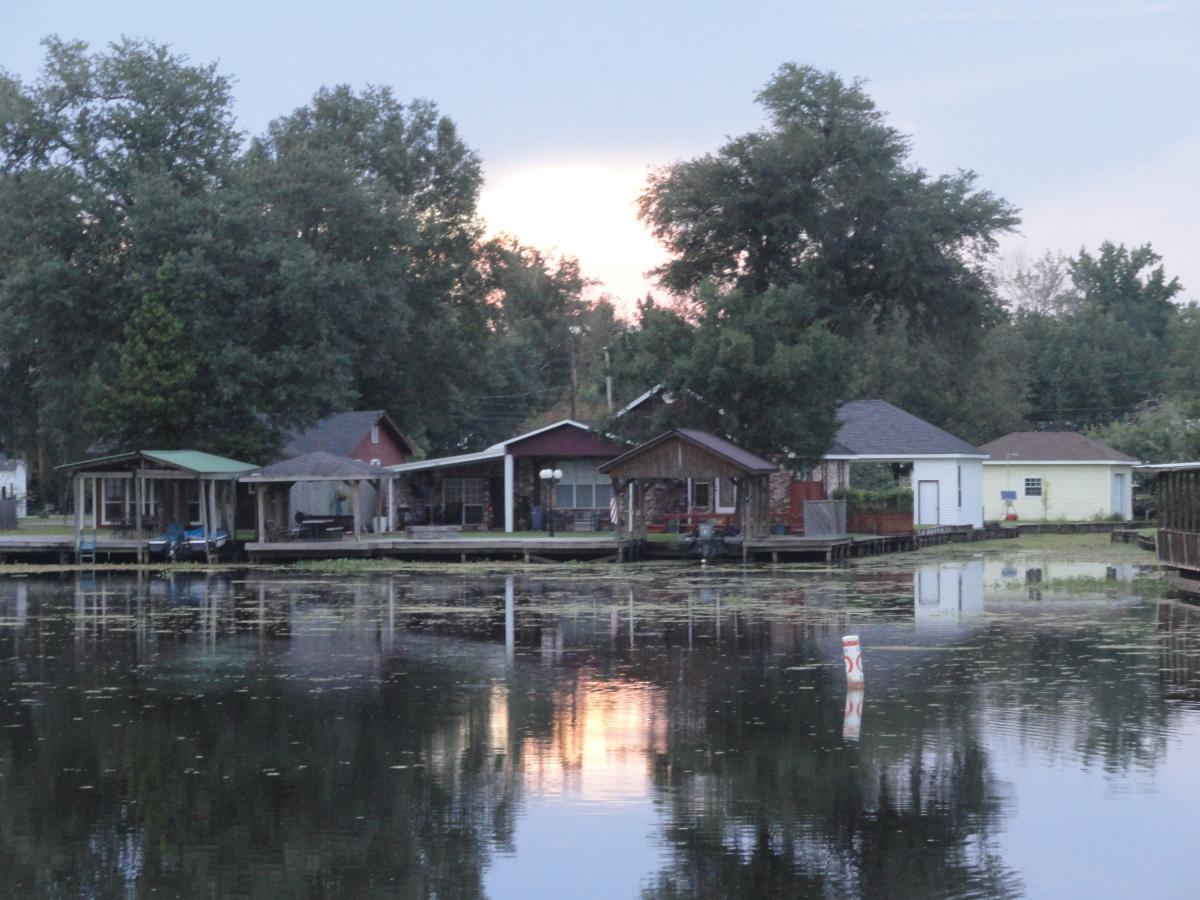 trees and marsh were last week. They wanted to know the source of the lingering, sometimes very strong, smell of diesel in the air.

The meeting hall was standing room only half an hour before the meeting.  What residents heard was anything but reassuring.

Although abandoned wells and leaky pipelines are no longer considered to be the source, bigger questions remain.   The Bayou Corne and Grande Bayou communities sit atop the Napoleon Salt Dome.  Until last year, Texas Brine mined salt from the dome and several companies currently store natural gas and LPG (liquefied petroleum gas) in the caverns.

Mark Cartwright, representing Texas Brine, admitted the company had to abandon operations at the mine last year as the result of “loss of integrity in the well bore”.  Testing indicated they were drilling in an area that was much closer to the edge of the salt area than initially thought.  Drilling too close to the edge could puncture a protective outer layer of solid rock salt, and threaten the integrity of the caverns, causing a possible collapse.

In response to a question regarding the thickness of the remaining protective outer salt layer, Cartwright was unable to say how close to the edge they were drilling. He could only say that initial studies indicated they were “hundreds of feet” away from the edge when they began drilling, but that measurement was taken years ago using older technology.

Adding to the concern are the storage caverns created over the years as salt has been removed.  Currently Crosstex, Dow Chemical, Chevron and others store store natural gas and LPG under the community.  As a result of the sinkhole, they are currently in the process of removing their products from storage caverns.

Perhaps most concerning to residents is a cavern storing butane, which belongs to Crosstex. Officials have not yet determined whether or not to relocate the butane, which is highly flammable.

Residents also expressed concern that residual gas and diesel from a leak that forced families to evacuate on Christmas Day 2003 could be seeping out. Some reports indicate large quantities lost during that leak are still unaccounted for.

Residents were out of their homes for two months and before they could return, say they were required to have gas vents installed and insulation blown into their homes as an added precaution against possible ignition of that gas.
According to Ball, the DNA fingerprint of the gas from the 2003 incident does not match the gas currently bubbling up.

After asking about recent test results indicating the presence of chloride (which would indicate the presence of salt) in the slurry area, residents were dismayed to learn sampling had been done only at the surface area, not at the bottom.Chloride is known to be more concentrated in deeper water. The presence of chloride may indicate a cavern has been compromised, threatening the entire dome structure.
Lake Peigneur, located above a salt dome 80 miles west of Bayou Corne, collapsed in 1980 when a drilling rig punctured a protective layer in the salt mine wall, causing the entire lake, including a drilling rig, several larges barges and large chunks of the surrounding land to be pulled into the cavern below. The pressure was so great that the bayou ran backwards, creating a large waterfall as the bayou was sucked back into the puncture hole. No one was hurt in that incident.

Dr. Wilma Subra worked extensively on the Lake Peigneur incident and suspects drilling too close to the edge of the salt may have compromised the cavern in Bayou Corne. Subra, an award-winning scientist, has worked on the Lake Peigneur incident for several decades. Yet she was excluded from meetings of scientists on Monday and worries for the safety of the surrounding community.

So does Brandy Castagnos of Belle Rose, who has relatives in high school and is worried about school starting. Students in Pierre Port will have to travel through the evacuation zone to get to school in Napoleonville. “It’s a mandatory evacuation...but it’s ok for the students and everybody to pass?” Officials said Highway 70, which runs through the evacuation zone, will remain open unless something new develops.

For now, federal, state and local officials, along with industry scientists, will continue to investigate. Martin Triche, Ward 5 Juror & Parish President, along with other Parish officials urged investigators to use every technology and resource available to protect the community. Many residents and Parish representatives are urging state officials to work with a greater sense of urgency. Waiting for answers is difficult and the evacuation order has been continued.
Jason Charlet, lives in the evacuation zone, 2600 ft from the sinkhole, “I have cracks in my master bedroom, in the ceiling. I have an in ground pool and the inside’s lined with tiles. I have three places where the tiles popped out, cracked. I think it’s more than just where they say it’s at…we need more answers."