My Dream Deferred: Why a Louisiana Academic with Disabilities is being Blocked from Getting a Ph.D. 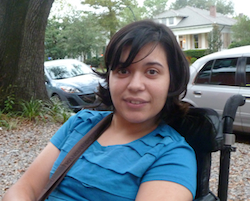 My name is Ashley Volion. It has always been a dream of mine to become a professor and to open a nonprofit for people with disabilities, within my Louisiana community, that would teach them about their bodies and their sexual health. For me this aspiration is deeply personal – I have cerebral palsy and have worked hard all my life both to live independently and to support my community. I took a major step towards my dream in 2010, when I applied for the University of Illinois at Chicago’s Ph.D. in Disability Studies Program - the only Ph.D. program in disability studies offered in the United States. I was overjoyed when I was accepted into the program 2011 ­– what felt like a lifetime of hard work had paid off. But I had to defer my dream of attending UIC this year, because the state of Louisiana denied extending my attendant care services – which I require in order to live and work independently – to my time in Chicago. This is my story, but it is also the story of the barriers facing people with disabilities in Louisiana and beyond.

My academic career began with a bachelor's and a Master of Arts in sociology from the University of New Orleans. After the competition of my master's thesis in May 2010 entitled, Everyday Lived Experiences and the Domain of the Sexual: As Explored by Four Physically Disabled Women, I knew my next goal was the University of Illinois at Chicago (UIC). I informed my family and friends of my pursuit, and I informed all the people involved in my care - my case manager, provider agency, staff. In June 2010, I inserted the University of Illinois at Chicago (UIC) into my Comprehensive Plan of Care (CPOC), which is a plan that basically tells the state your goals and what you're going to do to meet those goals. For the past two years my staff has helped me with every step of the application process, whether it be bringing me to my GRE appointments, or whatever I had to do to get this going.   When I was accepted into UIC I was ecstatic. I quickly informed all parties that I would be starting the program in August 2012. I was granted a research assistantship that included a tuition wavier and a monthly stipend that would help pay for housing. I located and obtained housing, and my two primary personal care attendants agreed to help me get settled by coming out to Chicago and care for me for a month each.

I was then asked by my provider agency in April 2012 if I had submitted a written request to the Louisiana Department of Health and Hospitals (DHH) in order to utilize my services while in school. I had not; So, I quickly drafted a letter and emailed it to DHH. I did not think that my request would be denied for the
following reasons:

1. Attending University of Illinois at Chicago had been my #1 goal in my Comprehensive Plan of Care for over a year.
2. I did not plan on becoming an Illinois resident.
3. I would remain a Louisiana resident and reside in Louisiana 1/3 of the year.
4. I plan on utilizing the knowledge I gain at UIC in order to help those with disabilities in Louisiana.

I was wrong. My request was denied. I was heartbroken. After a lifetime of hard work, the one thing that I wanted more than anything was taken away from me. Without personal care attendants, I’m unable to pursue my Ph.D. I called the Advocacy Center, and Laurie Pellier helped me do an appeal with DHH. That request was denied as well. Since I can't go to school, UIC is letting me defer my acceptance until next fall. I’m working now to keep fighting DDH’s decision and to figure out another option.

Getting services through the state of Illinois is not an option, because they do not provide the level of care that I require. It would also take a year to become an Illinois resident, a requirement to be eligible for their personal care attendant program. Plus, I don’t want to become an Illinois resident. I would lose Louisiana residency. All my friends and family reside in Louisiana, and I plan to return here as soon as the Ph.D. program allows it.

This has been more than heartbreaking for me, because it's all I worked for for so long. To have this taken away from me after all this hard work just makes me sad and it makes me angry about the messages we still send to disabled people.

This decision sends a clear message that we are second class citizens. It says that if you are a person with a disability, your hopes and dreams are limited.   As a community, we're told that we need to be independent, but there's so many barriers that don't allow us to have equal access. If I would be allowed to obtain a Ph.D. and live up to my potential, I could be independent. A Ph.D. would allow me the means to pay for my own physical care. But we're not given the resources to be able to live up to our fullest potential, so we don’t have a fighting chance to get the economic resources that we need in order to manage our own personal care, or to take care of our selves.

To have an equal playing field anywhere, we need equal access. We need to as a society show people that with hard work, things are possible. I think that's the reason why I'm still fighting right now. It's not just for me.   Yes, I would like something to happen that would allow me to go to Chicago by next year, because that's my number one dream. I'll keep fighting and fighting until it happens. I have so much to give back and will not give up on my dream. But I also don't want the next person to come along in my situation to be shot down at the very end. I want people, especially here in New Orleans and in Louisiana, to know that if you fight for something, things could get better and you're not alone.

Related: "The World is Missing Out on a Whole Lot" - Conversation with Disability Rights Scholar Ashley Volion