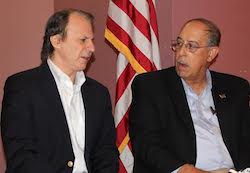 The recently established Green Army has been raising a lot of eyebrows (and anxiety) in the ranks of the oil and gas industry. “We are under attack from these people, and we have to push back,” explained Louisiana Oil and Gas Association (LOGA) President Don Briggs at the recent State of the Industry Luncheon held in Lafayette.

Although identified by Briggs as one of several individuals and groups who are enemies to the industry, John Barry – who until recently was vice-president of the Southeast Louisiana Flood Protection Authority, says that is just not the case.

“The industry may see me as an enemy, I do not see the industry as an enemy,” he explained at a public meeting held at the Clifton Chenier Center, also in Lafayette, on February 6.

Barry has been perhaps the most prominent public face regarding the landmark lawsuit filed last summer by the levee board against oil and gas producing companies operating within the state. The board filed the suit after citing studies that show the industry, which has cut around 10,000 miles of canals and pipelines through Louisiana coastal lands, has significantly contributed to the state's land loss and increased risk of flooding.

“What this lawsuit is about is three things, what every parent teaches their kids - you keep your word, you obey the law, and you take responsibility for your actions,” Barry added.

Barry, who has been a recent target by both LOGA and the Jindal administration, is also the President of Restore Louisiana Now (RLN), which was created in order to support the lawsuit and the levee board.

Former vice-president of the Southeast Louisiana Flood Protection Authority, John Barry, explains the lawsuit filed against the oil industry last summer and the need for the state to act quickly in protection of its sinking wetlands.

RLN is also a member of  the growing Green Army – a network and coalition of environmental groups and citizens concerned with issues that are effecting the human health and the ecological well being of the state.

“There is an expiration date on clean drinking water in Louisiana. We will have less tomorrow than we had today. And this is because of the acts of men, of greed and of a failed democracy. A democracy that put the flag of oil and gas companies over our capitol, over the constitution of responsibility to look out for the welfare of the people,” explained Honore at the meeting.

Honore, who is best known as the commander of the Joint Task Force Katrina, which coordinated military efforts for relief to a storm-ravaged New Orleans following the 2005 hurricanes, went on to challenge the audience to take action in defense of the state's resources.

“We are the witnesses. We must report. We must speak out. We must take action to make sure that the rest of the Nation knows that we are killing our water.”

Retired Lieutenant General Russel Honore, best known as the commander of the Joint Task Force Katrina, addresses the audience at a public meeting held in Lafayette, Louisiana, to discuss legislative goals of the growing Green Army.

Additionally, speaker, attorney and Acadian cultural defender, Warren Perrin, expressed worry of the effects of land loss to the Cajun culture and people to those present at the meeting.

“Initially the state would allow the landowner mineral rights if indeed the wetlands went underwater. That is no longer the case today... If your land is underwater and it is attached to a navigable body – can you get in or out by boat? It's no longer your land. It is in effect disproportioned, or eminent domain, and the public is unaware of this... The state has had no incentive to protect and prevent the erosion of our wetlands,” he explained, adding; “That is one of the items that I think needs to be addressed, and make sure that we don't force the Cajun people, who settled primarily in the prairies and wetlands, to experience the second Le Grand Dérangement [Expulsion of the Acadians], like their ancestors suffered in 1765.”

Attorney and cultural defender, Warren Perrin, explains the need to defend the Acadian heritage from rapid land loss and the "second expulsion."

Next steps for the Green Army include the “Water Festival in the Capitol,” set for Saturday, March 8th, days before the opening of the next legislative session. The rally will include speakers and talent from across Louisiana who are working to protect the State's waterways and aquifers.

Cherri Foytlin is a freelance journalist, author, advocate, speaker and mother of six, who lives in South Louisiana – an area inundated with industrial pollution. She is the author of “Spill It! The Truth About the Deep Water Horizon Oil Rig Explosion,” and regularly contributes to www.BridgetheGulfProject.org, the Huffington Post, Daily Kos, and several local newspapers. In the Spring of 2011, she walked to Washington D.C. from New Orleans (1,243 miles) to call for action to stop the BP Deep Water Drilling Disaster, and has been a constant voice speaking out for the health and ecosystem of Gulf Coast communities in countless forms of media. As an advocate for climate justice, she has participated in numerous actions and events across the nation and in the UK. In addition, she is a co-founder of The Mother’s Project – Gulf Coast and Idle No More Gulf Coast.