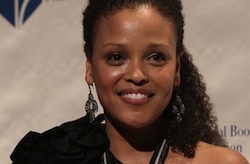 Jesmyn Ward of Delisle, Mississippi, recently won the prestigious National Book Award for her novel about "a poor black family living and loving in a rural backwater Gulf Coast town in the days before Hurricane Katrina." In an interview with Julianne Hing of Colorlines, she talks about writing about the "fraught and lovely and important" lives of poor folks and black folks and rural folks.

By Julianne Hing. Crossposted from Colorlines. When Jesmyn Ward’s second novel “Salvage the Bones” was awarded the National Book Award two weeks ago, which she explained to her family as the “Oscars for books,” it immediately propelled Ward, a relative newcomer, onto the national stage. It also shone a light on her story of a poor black family living and loving in a rural backwater Gulf Coast town in the days before Hurricane Katrina.

The place and the people were inspired by her own hometown of Delisle, Miss. In the book, the family of siblings have better things to do than fret about the storm, which is just days away from making landfall. They’re chasing basketball dreams, tending to beloved spouse-pets, and in the case of Esch, the book’s 15-year-old narrator, struggling to accept the new life growing in her.

Ward, who called her recent win “surreal,” chatted with Colorlines.com about conventional depictions of black women, giving life to the stories of people she grew up with, and having the courage to commit to writing.

You mentioned in your acceptance speech that you set out to write about the lives of black folks and poor folks and rural folks, “so that the culture that marginalized us for so long would see that … our lives are as fraught and lovely and important as theirs.” Can you say more about that?

Jesmyn Ward: When I first committed to writing that was the reason I did it, because I wanted to write about people who were just really marginalized, who I never really saw in our modern popular culture, and so that was important to me, to reach the kind of people who had misconceptions and preconceived notions about those kinds of people, and to write against that.

That’s a large part of the reason that I decided to write about the kind of people I grew up with and did not use writing as more of an escape into another world, which I’d done when I was young in high school and somewhat in college. When I really committed to writing, I didn’t do that.

Can you talk about popular depictions of black women and girls, and where they fit in our popular imaginations, and if or how you see your work as a response to that?

It’s an interesting line that I’m walking because at the same time that I’m trying to write against these preconceived notions that I feel people have about black people, poor people, Southern people. I know that in some ways if people were summarizing my book, they could say: Oh, it’s about a black pregnant teenager who is poor and in love with a boy who’s not in love with her. In some ways they could think it’s reinforcing these stereotypes, but I feel—I hope—that the power of the characterizations, and how human they are, works against that. So even though she’s pregnant, she’s 15, they are very poor, I still hope that because she’s very human, that will counteract those expectations and make her story more universal.

I think we have a very limited view of black women in this country in regards to what we think they’re capable of and what we expect of them. There’s a reason that [Esch, the 15-year-old narrator] is darker than I am, you know what I’m saying? That she’s not light skinned, that she thinks of herself as unremarkable in every way, because I wanted to write about a character who is outside of all the norms of those standards of beauty.

I remember earlier this year there was this insane article that I read by that crazy scientist who said there was a scientific reason that black women were unattractive, the most unattractive out of everyone. That we’re still encountering things like that, I feel like I have to write against it, so hopefully after people encounter these characters, it’ll be harder to reduce black women and black men, the people I write about, to these insane types and reduce us to these weird, arcane ideas.

There’s another character in your book, China, who’s such a powerful force in the book, and who’s a dog. Who or what inspired her?

She just popped up into my work one day. I discovered her and [her owner, Esch’s older brother] Skeetah at the same time, and what’s interesting about them, at least to me, is this bond that they have, which is so strange and weird and it confused me and intrigued me. I couldn’t let them go. I kept returning to this character in my head, before I began “Salvage the Bones.” And where I was growing up, my dad had pit bulls that he sometimes fought. My brother also had a pit bull. Young men in my neighborhood, and some young women, too, when they get a dog, there’s no choice, they always get pit bulls. It’s part of that culture that informed my choice.

The scenes of Katrina were incredibly gripping. Where were you and where was your family during the storm?

I was home, in southern Mississippi, in my hometown of DeLisle. That was the summer between my second and third years at the University of Michigan and so I was supposed to go back to teach in the fall and because I would always come home for the summers in Mississippi, I thought, I’ll stay here till the storm passes so I can be with my family and then go back to school. I totally underestimated the storm, so I was here for it.

Read the rest of the interview on Colorlines.com.