Is there a link between human and dolphin miscarriages on the Gulf Coast? 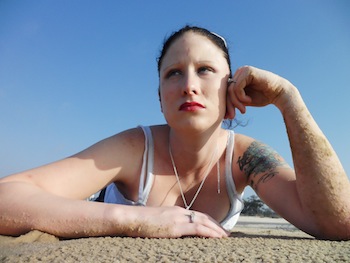 I never was one to rock the boat.  I'm a sailor, for goodness sakes.  I would take off from the harbor at daybreak sometimes an' barely beat sundown coming in. I've sailed like that, since i was seven, for 50 years.

When I heard about the rig blowing, I had a feeling.  Something foreboding... No sufficient words to describe the fear.  But it was the same sinking dread that I felt when we'd heard that Katrina had zeroed in on our latitude an' longitude, and was barreling toward us with all of her might an' destruction, poised to take out our happy little seaside village... An' she did.

Until I couldn't. As the days turned into weeks, I became less an' less able to get out.  Then, I became less an' less able to get up, for weeks.  I was in near-respiratory failure.  I couldn't walk down my hallway, without holding on.  Fierce headaches, noticeable memory failure, the simplest things escaped me.  Fighting one infection after the other, taking sips of air, not breaths, scared to go to sleep, for fear that I might not awaken. I had what some folks were calling chemical pneumonia.  It felt like my lungs were burned.  They oozed an' drained, as though they WERE burned.

It took months to get better... not well, but better.  With the help of a nebulizer, Advair an' emergency inhalers, I can function again, minimally.

My daughter, Daisy Seal, didn't believe that my maladies were a result of exposure to airborne oil an' dispersants. She couldn't wait for the DMR (Mississippi's Department of Marine Resources) an' the Governor to give the all-clear.  She took off for the beach, an' our local seafood restaurants.  She played in the water, dug in the sand, went fishing off the pier, an' ate all of her favorite seafood (soft-shell crabs, oysters, shrimp).

In October, 2010, Daisy had a miscarriage. Her OB/GYN told her that she had never seen such an inordinate amount of miscarriages over such a short period of time an' in such a small geographic area before. My daughter was broken-hearted. But, refused to associate her miscarriage with exposure, as we were bombarded with the all-clear commercials, the government's reiteration that the beach was "whole" again. 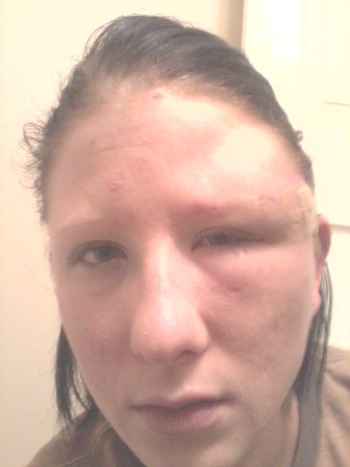 Then came a horrible abscess on the side of her face, near her eye. In just hours, her face blew up like a basketball, and she was rushed to the hospital. They lanced it, gave her three antibiotics, sent a sample off to be tested.  It wasn't a staph infection.  She had to return three times before it became manageable.  Then, she developed a rash. Not an ordinary rash, but giant boil-like lesions that burst, leaving crater-like hideous scars all over her legs an' arms.  Again she is on antibiotics, but the rash still comes an' goes.

Daisy miscarried again in December. She was devastated. Feeling that something must be very wrong with her, but that it couldn't possibly be a result of her exposure, she continued her behavior. She made many trips to her doctor, with "female problems".

She came to me, finally in June of this year, more than a year after the spill, an' after many months of near-daily, direct exposure to the elements.  She asked if I thought her weakness, headaches an' rash may be related to her exposure to the sand, the water an' the air.

I contacted LEAN (Louisiana Environmental Action Network), an' they arranged for a test.  We planned a trip, an' we had her tested...

Her test results are available to anyone who wishes to see them, an' show that she is quite toxic. Benzene, Toluene , m.p-Xylene, Hexane, 2-methlypentane, 3-methylpentane, at dangerous levels.

I have been detoxing for many months, using a program designed by an for the first responders of 9/11, who, curiously, show many of the same chemicals an' effects that we have. I am improving, albeit resigned to some of the permanent damage done.

But, Daisy has not improved, an' she is weaker by the day.  An' my precious daughter, a loving wife an' dedicated mother (she has an eight year old son), fears that she might die.

I talked to someone in Washington who told me, that according to their findings thus far, Daisy's DNA may have been altered, modified by her exposure to the chemicals in the dispersant an' the compounds in the oil...an' that it would be better for she an' her husband to stop trying to have a child.  What?!

Fritzi Presley, of Long Beach, Mississippi, describes herself as a survivor, "I survived Katrina, losing only "stuff". Miraculously, I survived cancer, becoming a better person for it. Sadly, I survived the deaths of my wonderful husband and amazing son, making me strong!!! And, now, the oil spill aftermath...making me determined!"