The BP Oil Disaster is Not Over 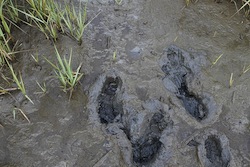 Originally published on Care2.com. Over a year and a half ago, BP’s Macondo well erupted, spewing over 200 million gallons of oil into the Gulf of Mexico. We continue to experience impacts from the disaster today. The oil is still washing on shore and the environmental impacts are still being revealed – the BP oil disaster is not over.

We’ve seen record numbers of dolphin mortality — nearly 500 since the disaster, low numbers of whale sharks returning to the Gulf, and deformities on the gills of the Gulf killifish — an abundant bait fish and an important food source for many marine species.

Even worse, recent headlines and GRN’s monitoring efforts have underscored that the oil industry continues to abuse the Gulf, failing to learn the lessons of the BP drilling disaster.  Our nation’s energy sacrifice zone is paying the true price of our collective oil addiction.  Adding to the outrage, not a single bill has been signed into law to protect and restore the Gulf or the threatened coastal communities which rely on it.

First, the back story:  Recent research shows clearly that the act of removing oil and gas deposits from beneath Louisiana’s marsh over the past 50 years fueled catastrophic subsidence, playing a huge role in turning nearly 2,000 square miles of coastal wetlands into open water since 1932.  Add in the impacts of 10,000 miles of canals that have been dredged by and for the oil industry, and the role of levees and jetties which keep the Mississippi River from ever rebuilding those wetlands with dirt and fresh water, and Louisiana is faced with an unparalleled coastal wetlands crisis.

Read the rest of this article on Care2.com.