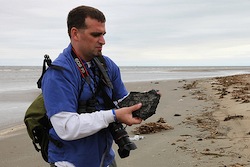 Crossposted from HealthyGulf.org. The big news is that BP and the plaintiffs steering committee have agreed to a process to settle remaining private claims, and that the PSC will be bowing out of a trial. BP is spinning the agreement to their investors & the business world as spending out the remainder of their compensation fund (or $7.8 billion) while the PSC points out the agreement isn't capped.  This is certainly big news, with specific carve outs for health care ($100+ million) & seafood industry claims ($2+ billion), as well as opening up a process for health claims for workers and coastal residents who were exposed to BP's toxic oil & dispersant.  This last point is significant, as Ken Feinberg's Gulf Coast Claims Facility has failed to pay out a single health claim, despite troubling problems among Gulf communities.

BP and their co-defendants remain on the hook for the fines stemming from Clean Water Act and other environmental law violations.  Also, BP will need to pay for the ongoing Natural Resource Damage Assesment (NRDA) and subsequent restoration that comes out of that process.  BP is still looking at billions and possibly tens of billions of dollars in liability, and according to statements made by Attorney General Eric Holder to Congress, and Louisiana's Coastal Czar Garret Graves to the media, federal and state agencies remain committed to a trial. And let's not forget about the criminal fines, which could be on top of the civil CWA fines.

This makes sense because the first phase of the three-part trial that Judge Barbier was planning would have analyzed what went wrong offshore at the Deepwater Horizon rig and the Macondo prospect and who was to blame for the disaster that ensued.  This is the phase of the trial which would have likely determined whether BP, Transocean, Haliburton, Cameron and others were negligent or grossly negligent. It's highly unlikely that BP et al would cop to gross negligence without a trial, and it's also unlikely that the federal and state governments would be willing to leave the difference between those types of negligence (as much as $15 billion dollars) on the table.

While there are many many panels, investigations and commissions that have analyzed what went wrong and who was to blame for April 20, 2010, these are entities that didn't have subpeona power, and couldn't truly hold BP et al accountable.  So despite the reams of reports and recommendations that are out there already on this disaster, a trial, or a federal settlement is the only way to exact accountability.

As the international media remains focused on New Orleans to cover the trial (or settlement) of the century, it's clear to me that the word that the oil disaster continues here in the Gulf is indeed news.

The hundreds of pounds of tarballs being picked up daily, the lesions on our fish, the Macondo well oil seeps and the 20 miles of Louisiana coastline still soaked in BP's crude, beg for research, restoration and the world's attention.

Whether it's by passing the RESTORE Act to direct BP's fines to our Gulf, or demanding the Department of Justice hold a hard line for the Gulf in their continuing negotiations with BP, we need the world's commitment to bring justice to our nation's energy sacrifice zone.

I hope the world (and the federal government) hears us.