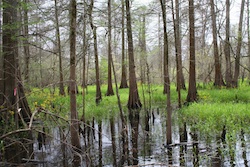 The St. Martin Parish School Board’s recent decision to log the cypress-tupelo swamps on land owned by the entity in the Atchafalaya Basin has become a source of controversy.

According to the Atchafalaya Basinkeeper, Dean Wilson, the source of contention surrounds the idea of clear cutting the trees, some of which were around during the time of Jesus.

“We believe the biggest asset to the school is to have these areas intact,” he explains.

“We had spoken with the superintendent [Richard Lavergne], and he had said that they would stop the sale of the timber until we could finish our analysis, but then the president of the school board [Jimmy Blanchard] signed the bill of sale.”

The 640 acres in question, located southwest of Cow Island in the Atchafalaya Basin floodway, is set to be logged for around $148 per acre, which, after fees paid to the timber company, totals out to $88,200.

Photo: The cypress-tupelo scattered swamp where the St. Martin Parish School Board hopes to log, located Southwest of Cow Island in the Atchafalaya Basin floodway.

According to St. Martin Parish superintendent, Richard Lavergne, the school system is set to move forward with the proposal, “The board had taken a vote, which passed with only two nays. After it passed we signed the contract – it’s done.”

“And according to our board attorney, who reviewed it, we followed federal and state guidelines – everything is legal,” he adds.

Those in opposition to the plan cite that, “The Basin is the greatest asset that kids who live in the area have and could be used for long term, sustainable education purposes.”

Wilson agrees, adding, “Cypress-tupelo logging in the Atchafalaya Basin is unsustainable, once the trees are logged they will not regenerate and the roads that they need to access the trees are illegal without a permit.” 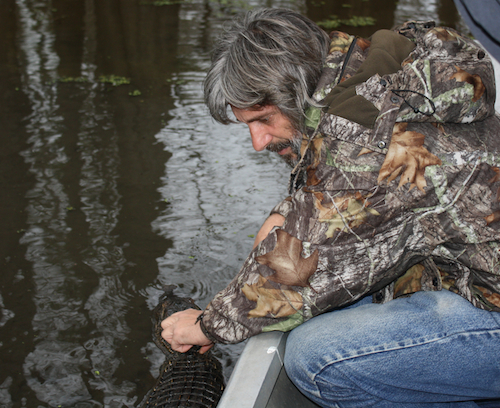 In a letter written to attorneys working on behalf of the Atchafalaya Basinkeeper organization, submitted here in its entirety, local author and Basin resident Greg Guirard, explains his concerns:

I promised to write and tell you how I feel about what the St. Martin Parish School Board is doing when they sign a contract to allow the cutting of cypress trees in the Atchafalaya Spillway, where cypress trees will never grow back, due to the nature of the hydrology of that beautiful place.

I have written and published seven books about the Atchafalaya Basin, and a major theme of every one of those books is the senseless and tragic destruction of the great cypress forest that once existed there.

I quote from page 72 of Atchafalaya Autumn II:  ‘It seems almost inconceivable to me that all the great cypress trees were cut down, without protest or opposition of any kind. There must have been someone, I keep thinking, with the sensitivity and awareness and wisdom to recognize the need to preserve some of those magnificent giants for their own time and for future generations.... (and on page 82-83)  I long for a world in which people of power or wealth would value the serenity and beauty of Nature as much as some of the people who don't have power and wealth and the desire to profit from the demise of Nature, the way that the timber company people did when they cut down every last cypress tree...in the Atchafalaya--to transform those trees into lumber that they could sell for a profit....

I want to avoid the despair that comes from my recognition of the fact that the wilderness is going to be destroyed....I want people to recognize some right the earth itself has that overrides the rights of people or society to destroy it or to develop it or to progress, somehow, by diminishing it.’

We allowed the destruction of the trees back then, or at least our ancestors did, and here we are, ready to let it happen again.  I remember the time in my life when I began to realize what had happened in the Atchafalaya Basin and the fact that we had lost something not only valuable but irreplaceable.

I imagine a student sitting in a St. Martin Parish schoolroom now, a student who is unaware of what the School Board plans to do with his or her heritage in the Basin, and I see that student years from now finding out what happened and wondering why someone with wisdom and a sense of vision didn't do something to stop it.

Once the trees are gone, it will be too late to correct the mistake.

As the old fisherman in my novel The Land of Dead Giants says to his grandson, by way of explaining why he was a logger as a young man: ‘I didn't let myself feel anything for the great forest I was helping to destroy. All I could see were the trees that waited to be cut.  I had no more understanding of what I was doing than a hound dog understands the deer he chases, so that the hunter can shoot it....I am a man who destroyed, with my own hands, the greatest and most beautiful thing I have ever seen with my own eyes.’

As far as the young boy is concerned, it's way too late.  The old man can tell him stories about the great cypress forest, but he can't show him the trees.  They're all gone.

I don't believe that we can afford to stand by helplessly and let this happen again, to ourselves and to the children in our schools who are depending on us, whether they know it now or not, to protect their wilderness heritage.

Please understand that I would be happy to testify before any group about this matter and to do anything else within my power to help stop the cutting of cypress trees in the Atchafalaya Basin.

Thanks to you and to Basinkeeper Dean Wilson for everything you do, morally and legally, to help prevent this needless and senseless destruction. 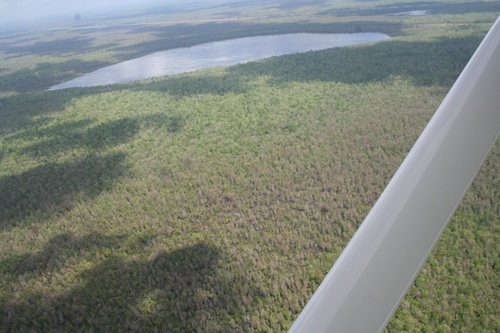 Photo: An aerial view of the Atchafalaya Basin site where the St. Martin Parish School Board has plans of logging the thousands year old cypress trees.

************
Cherri Foytlin is a journalist, oil worker's wife, mother of six, and Louisiana resident whose family has been deeply impacted by the BP Oil Disaster and consequential moratorium on deep water drilling. She co-founded Gulf Change, blogs for www.BridgeTheGulfProject.org, and walked to Washington D.C. from New Orleans (1,243 miles) to call for action to stop the BP oil disaster.  She has been a constant voice, speaking out to the Obama Administration's Gulf Oil Spill Commission, and in countless forms of media.  Cherri will continue her fight for the industries, people, culture and wildlife of south Louisiana and the Gulf Coast "until we are made whole again."