Mississippi River Walkers Arrive at Dead Zone in the Gulf 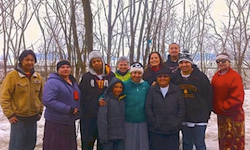 “I love this river,” explained Sharon Day during a ceremony held May 3rd, at Fort Jackson in Plaquemines Parish. The occasion drew to a close a more than 1,700 mile journey of the Mississippi River Walkers 2013 – a group of indigenous men and women who walked the length of the second most polluted river in the United States.

“Our goal was to pray for the river and to take that water from the source to the mouth of the river where the dead zones are and to give her a taste of herself,” Day explains.

According to the travelers, there is a huge difference in the waters of the Great River up north and the southernmost tip, which lies as the border between Louisiana and Mississippi.

“The river is still blue (at its beginning). You can drink the water at its source. As you come further south, the river changes color. We were able to actually pay attention to the difference in the river because we were walking – texture, the color, a film on top of the water. You see all of these things change,” Day says.

As an extension of the Water Walkers - which is an initiative started in 2002 by Josephine Mandamin to bring awareness to pollution in the nation's water bodies, the walkers carried a copper pail of water, taken during a ceremony held March 1st at the headwaters of Lake Itasca. With each step they recited prayers of strength and love to the River, carrying in addition, their hopes of healing for the water herself.

“The idea was to carry the water from it's source where it's pure and clean to the mouth of the river, just to give the river a taste of herself the way she started off, so [that] she remembers the way she was in the beginning, and to create that hope that she can be that way again.”

Short video by 28 Stones, highlighting the journey of the Mississippi River Water Walkers 2013. Music composed and performed by Sharon Day and friends.

The much abused river has a considerable amount of pollution to overcome. According to a report released in 2010 by the advocacy group, Environment Missouri, “more than 12.7 million pounds of toxic chemicals such as nitrates, arsenic, benzene and mercury,” are dumped into the river yearly.

Recently that number may have broadened, due to a 300 gallon crude oil spill after a towboat struck a barge earlier this month.

In addition, and according to the 2012 State of the River Report, the introduction of invasive species – such as the Asian Carp and excess sediment – also contribute to the destabilization of the watershed.

The continuing contamination of  the Mississippi is the source of a  growing problem in Gulf waters. According to the National Oceanic and Atmospheric Administration, more than 6,600 square miles of the Gulf of Mexico is polluted by runoff from the river, in what is called “the dead zone” - where marine life cannot survive due to lower oxygen levels.

The problem concerns local First Nations as well, according to United Houma Nation Chief Thomas Dardar, Jr., who spoke at a reception dinner held in New Orleans welcoming the walkers. “We are a water tribe, we live along the coastline in six parishes. The areas that we live, and occupy... our residency, was created by the Mississippi River.”

“We belong to the land... We are only here a short time. Our legacy is what we are going to leave for our grandchildren... We let it go way too long before we stood up and really have taken a stand, which we need to take now.”

Day agrees, “It's very sad to see the condition of the water, to see even the land. There's so much litter and trash.”

She encourages others, especially women, to become involved in protection of the Mississippi, “What would happen if all the women of the world stood up and said, 'No more?'” she wonders.

As the walkers, and those who joined them along route, returned to their homes and their lives, Day posted recently on the Facebook, “At work, but gazing out the window from time to time, to see the rain falling, and wishing, 'We love the mighty Mississippi fiercely, each day we walk beside you is a joy. We offer our asemaa* with prayers so reverently. We love you, Mississippi. Heya heya hey ooooooo.'”