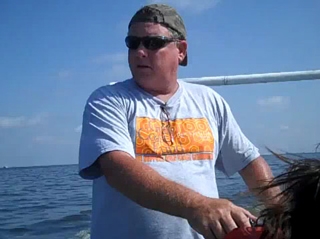 The boat ride, out, from Lafitte, Louisiana, Sunday, May 23, 2010, to our fishing grounds was not unlike any other I have taken in my life, as a commercial fisherman from this area.  I have made the trip thousands of times in my 35 plus years shrimping and crabbing.  A warm breeze in my face, it is a typical Louisiana summer day.  3 people were with me, my wife Tracy, Ian Wren, and our grandson, Scottie.  I was soon to find out, how untypical this day would become for me, not unlike a death in the family.  This was going to be a very bad day for me.

As we neared Barataria Bay, the smell of crude oil in the air was getting thicker and thicker.  An event that always brought joy to me all of my life, the approach of the fishing grounds, was slowly turning into a nightmare.  As we entered Grand Lake, the name we fishermen call Barataria Bay, I started to see a weird, glassy look to the water and soon it became evident to me, there was oil sheen as far as I could see.  Soon, we were running past patches of red oil floating on top of the water.  As we headed farther south, we saw at least a dozen boats, in the distance, which appeared to be shrimping.  We soon realized that shrimping was not what they were doing at all, but instead they were towing oil booms in a desperate attempt to corral oil that was pouring into our fishing grounds.  We stopped to talk to one of the fishermen, towing a boom, a young fisherman from Lafitte.  What he told me floored me.  He said, “What we are seeing in the lake, the oil, was but a drop in the bucket of what was to come.”  He had just come out of the Gulf of Mexico and he said, “It was unbelievable, the oil runs for miles and miles and was headed for shore and into our fishing grounds”.  I thought, what I had already seen in the lake was enough for a lifetime.  We talked a little while longer, gave the fisherman some protective respirators and were soon on our way.  As we left the small fleet of boats, working feverishly, trying to corral the oil, I became overwhelmed with what I just saw.

I am not real emotional and consider myself a pretty tough guy.  You have to be to survive as a fisherman.  As I left that scene, tears flowed down my face and I cried.  Something I have not done in a long time, but would do several more times that day.  I tried not to let my grandson, Scottie, see me crying.  I didn’t think he would understand, I was crying for his stolen future.  None of this will be the same, for decades to come.  The damage is going to be immense and I do not think our lives here in South Louisiana will ever be the same.  He is too young to understand.  He has an intense love for our way of life here.  He wants to be a fisherman and a fishing guide when he gets older.  It is what he is, it is in his soul, and it is his culture.  How can I tell him that this may never come to pass now, now that everything he loves in the outdoors may soon be destroyed by this massive oil spill?  How do we tell this to a generation of young people, in south Louisiana who live and breathe this bayou life that they love so much, could soon be gone?  How do we tell them?  All this raced through my mind and I wept.

We continued farther south towards Grand Terre Island.  We approached Bird Island.  The real name is Queen Bess Island, but we call it Bird Island, because it is always full of birds.  It is a rookery, a nesting island for thousands of birds, pelicans, terns, gulls etc.  As we got closer, we saw that protective boom had been placed around about two thirds of the island.  It was obvious to me, that oil had gone under the boom and was fouling the shore and had undoubtedly oil some birds.  My God.  We would see this scene again at Cat Island and other unnamed islands that day.  We continued on to the east past Coup Abel Pass and more shrimp boats trying to contain some of the oil on the surface.  We arrived at 4 Bayou Pass to see more boats working on the same thing.  We beached the boat and decided to look at the beach between the passes.

The scene was one of horror to me.  There was thick red oil on the entire stretch of beach, with oil continuing to wash ashore.  The water looked to be infused with red oil, with billions of, what appeared to be, red pebbles of oil washing up on the beach with every wave.  The red oil pebbles, at the high tide mark on the beach were melting into pools of red goo in the hot Louisiana sun.  The damage was overwhelming.  There was nobody there to clean it up.  It would take an army to do it.  Like so much of coastal Louisiana, it was accessible only by boat.  Will it ever be cleaned up?  I don’t know.  Tears again.  We soon left that beach and started to head home.

We took a little different route home, staying a little farther to the east side of Barataria Bay.  As we approached the northern end of the bay, we ran into another raft of oil that appeared to be covering many square miles.  It was only a mile from the interior bayous on the north side of Barataria Bay.  My God.  No boats were towing boom in this area.  I do not think anyone even knew it was there.  A little bet farther north, we saw some shrimp boats with boom, on anchor, waiting to try and protect Bayou St. Dennis from the oil.  I alerted them of the approaching oil.  I hope they were able to control it before it reached the bayou.  We left them and started to head in.

My heart never felt so heavy, as on that ride in.  I thought to myself, this is the most I’ve cried since I was a baby.  In fact I am sure it was.  This will be a summer of tears for a lot of us in south Louisiana.

Editor's Note: Please see related videos featuring Mike and his wife Tracy Kuhns. A video shot in June 2010 focuses on the impact of the BP oil disaster on their family and fishing grounds and a video from 2008 focuses on Mike's concerns about coastal land loss.