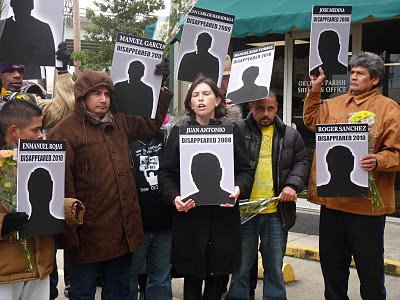 Early Thursday morning, Feb. 3, after 17 hours at the prayer vigil, Congress of Day Laborers’ leader Ezequiel Falcon was pulling out of the driveway of the Sheriff’s office when a sheriff’s officer trailed him and pulled him over. A second sheriff’s officer joined the scene. The officers informed Ezequiel that the vigil had been surveilled, identified him as a leader, asked for his documents, demanded to know his home address, and threatened to arrest him.

“The sheriff was trying to send all of us a message,” Falcon said after his harrowing interaction with Gusman’s officers. “But we shall not be moved.” Lead organizer for the Congress of Day Laborers, Jacinta Gonzalez said, “We are deeply disappointed the Sheriff Gusman’s Offices would see fit to intimidate and threaten Day Laborer Leaders taking moral action.”

The New Orleans Workers’ Center for Racial Justice (of which the Congress of Day Laborers is a project) wrote to Sherriff Gusman on Feb. 7 demanding a public pledge that there would be no further retaliation against community and civil rights leaders.

“[W]e and many criminal justice, faith, and labor leaders as well as City Council Members are deeply concerned about the actions of your staff against Mr. Falcon which violated his fundamental civil and constitutional rights,” the letter read in part. “We ask that you issue public assurances that no OPSO official will engage in retaliatory conduct against members of this community for exercising their civil and constitutional rights.”

The Congress of Day Laborers is demanding that Gusman reverse his policy of submitting to voluntary hold requests from Immigration and Customs Enforcement, which effectively funnel immigrant workers into deportation on the mere suspicion that they may be non-citizens.

Sheriff Gusman’s officers’ intimidation tactics targeting Mr. Falcon come on the heels of a major federal lawsuit filed by members of the Congress of Day Laborers against Gusman last week.

This major civil rights lawsuit, brought by members of the Congress of Day Laborers and litigated by the New Orleans Workers' Center for Racial Justice (NOWCRJ) and the National Immigration Law Center (NILC), exposes fundamental violations of law brought on by the Sheriff’s decision to submit to hold requests from ICE. These hold requests are often based on mere suspicion a person is a noncitizen- suspicion often based on racial profiling. “Sheriff Gusman’s policy leads to detention of community members – fathers, students, and reconstruction workers – on standards of proof far below what is constitutional and conscionable,” lead counsel Jennifer Rosenbaum, Legal Director for NOWCRJ, said to a packed City Council meeting on the day of the filing.