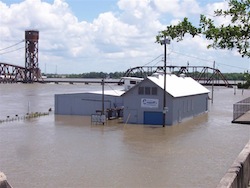 For the past two and a half weeks, floodwaters from the swollen Mississippi River have been diverted into the Atchafalaya River and into communities in Louisiana's "Cajun Country" to the south of Baton Rouge and southwest of New Orleans.  The Louisiana Environmental Action Network and award winning chemist Dr. Subra have been tracking the impacts of the flooding.  Here is Dr. Subra's latest report, based on an outreach visit conducted over Memorial Day weekend.

Atchafalaya River at Morgan City during the crest. Concrete flood walls along Front Street in Morgan City protected the front part of Morgan City.  River flow was being measured by the officials in the boat going upstream.

Morgan City and Berwick depend substantially on the shrimping industry. The shrimp boat docks along Front Street in Morgan City are submerged and the shrimp boats have been relocated to waterways not being impacted by the Mississippi River flood of 2011. The concrete flood walls protecting the front portion of Morgan City have been adequate to keep the floodwaters of the 2011 flood contained.

Concrete flood wall along Front Street in Morgan City holding back the floodwaters. The shrimp boat docks are completely submerged.

The concrete flood walls protecting Morgan City and Berwick from the floodwaters of the Atchafalaya River have openings that allow for business access to the river front areas and rail access.

Businesses along the river front, outside of the concrete flood wall, in both Morgan City and Berwick were submerged, shutdown and in some cases only accessible by boat if one was willing to venture into the swift current. These businesses are associated with the seafood industry, oil and gas service companies and boat building and repair facilities and must have river front and water access.

Business surrounded by Atchafalaya River flood waters. The business is located outside of the concrete flood wall.

A lighthouse from the coastal areas of St. Mary Parish was relocated to the waterfront of Berwick, restored and established as a tourist attraction. When crossing the Atchafalaya River on the Highway 90 bridge, the lighthouse is visible adjacent to the bridge. The lighthouse park is completely flooded with Atchafalaya River water. The railroad bridge is visible in the background. The Atchafalaya River water is almost up to the bottom of the structure of the railroad bridge. Rail traffic using the bridge is heavily controlled. Each train must stop before crossing the bridge, receive clearance and cross the bridge at a very slow speed due to the high flood water level.

Coastal Lighthouse relocated along the waterfront of Berwick. The lighthouse park is completely submerged in the Atchafalaya River flood waters. The railroad bride is located in the background.

Wax Lake Outlet
The Wax Lake Outlet, west of Patterson, is the second pathway for Atchafalaya River water to reach the Gulf of Mexico.

The Wax Lake Outlet is a 7 mile channel from the Atchafalaya Basin to Atchafalaya Bay and then the Gulf of Mexico. The flow of the Atchafalaya River through both pathways is providing sediment and building wetlands along the coastal areas of Louisiana.

To the west of the Wax Lake Outlet, Burns Point and the road leading to Burns Point, a recreational beach area, has been inundated by the backwater flooding from the Atchafalaya River. On the Memorial Day weekend, access to the recreation area has been prohibited due to the back water flooding.

Two weeks ago, Stephensville was in a state of panic and high alert as homeowners and business people prepared for the impacts of backwater flooding. On the Memorial Day weekend, people in Stephensville were prepared, calm and waiting for the flood waters. Home contents had been removed and placed in storage. Structures had been protected with sandbags. Storm drains had been plugged to prevent water from the waterways from flooding the streets and homes along the streets.

Hoses had been connected to gutter down spouts to protect the homes from being flooded if a rain event occurred. The elementary school had been surrounded by a water filled barrier and closed for summer vacation.

The calmness of the community was a drastic change. People were cooking on their grills and boiling seafood. Families were gathered for family cookouts. Piles of sand remained throughout the community, but no one was filling sandbags. The community was prepared for the backwater flooding and waiting for it to occur, meanwhile they were having a normal holiday weekend.

Stephensville home surrounded with sand bags, prepared for the anticipated backwater flooding. Hosing had been connected to gutter down spouts to direct rainwater outside of the levee protecting the home. The air conditioning unit had been elevated above the anticipated flood water level.

Amelia is located on the eastern end of St. Mary Parish. No levee system had existed to prevent backwater flooding from Bayou Boeuf, the Intracoastal Waterway and Lake Palourde. The National Guard constructed 3,000 feet HESCO Baskets along Bayou Boeuf and the shores of Lake Palourde. The National Guard had finished their task by placing additional soil against the HESCO Baskets to stabilize the baskets to withstand the anticipated water flow. The staging areas contained large sand bags and piles of sand ready for emergencies. The primarily Vietnamese community had sandbagged their homes. The elementary school had been surrounded by a water filled barrier. The Amelia Belle casino parking lot was filled with customers. The community was peaceful and quiet and enjoying the holiday weekend while being prepared and waiting for the backwater floodwaters.

The communities of Gibson and Bayou Black in Terrebonne Parish were prepared for the backwater flooding anticipated to inundate their communities from the Atchafalaya River.  Extensive soil levee systems had been constructed around residential areas, not previously protected. Drainage culvert had been blocked off with sheet pilings throughout the area. Waterways were lined with sandbags. Homes were surrounded by sandbags. Schools were surrounded by makeshift levees. Sand piles were located throughout the two communities. Water in the bayous and drainage ditches were lapping at roadways and low lying homes. The community was prepared and waiting for the back water flooding.

The boat landing in St. Mary Parish in Patterson, Berwick, Morgan City, and Amelia were flooded. Boaters were launching their boats from the top of the levees under the watchful eye of local police personnel. The ferry landing for access across the Intracoastal Waterway to Avoca Island was underwater several feet of water. The ferry had been removed from the location and access was prohibited by National Guard personnel.

The Intracoastal Waterway is a vital water transportation route that extends through St. Mary Parish. Tug boats with large barge tows and boats with supplies for the oil industry were lined up in both directions for up to 20 miles awaiting passage through the Bayou Boeuf Locks due to the high river stage and swift current conditions.

National Guard troops and local police where present throughout the area patrolling and inspecting the integrity of the levee system, insuring the protection of the levees at strategic access points, and monitoring the floodwaters of the Atchafalaya River.