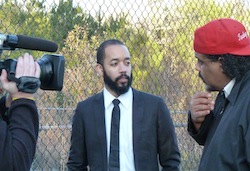 When I heard that The Daily Show was sending one of its "correspondents" to Turkey Creek (in coastal Gulfport, Mississippi), I tried to imagine how a brief satirical “news” segment might shed light on a story I take seriously, and one that I've been documenting on video for more than a decade (read about the Turkey Creek documentary here). Like so many, I welcome The Daily Show's comic insight when the straight news is too much to take. But having shot hundreds of hours of footage in an effort to do justice to a struggle that stretches back to Reconstruction, I'm a bit freaked out waiting to see how the show handles the story.

I know it won't be the most shocking media coverage I've seen about Turkey Creek. That came in the form of a local newspaper headline in 2003 that read "Mayor: Development foes are 'dumb bastards'." Gulfport mayor Ken Combs was unhappy that the African American communities living in the Turkey Creek watershed were, with the help of the Sierra Club and others, getting in the way of a large development project he supported.

I'd made my first visit to Turkey Creek a couple years earlier, when my friend Derrick Evans, whose ancestors settled Turkey Creek after the Civil War, invited me to help document its rich history through the memories of his extended family and neighbors. The city of Gulfport was rapidly growing up around Turkey Creek. The community cemetery, where freed slaves and their descendants were buried, had recently been bulldozed for development.

The citizen-led effort to protect the watershed and the people living there was making headway in 2005 when news broke of a hurricane named Katrina approaching the coast. The area was devastated by the storm, and for a time the national media was interested in efforts to rebuild ("After Hurricane, Eyes on Historic Area"). In the following years, the fragile Turkey Creek watershed and its low-income residents faced an unprecedented onslaught of development. I was visiting Turkey Creek in April to do some final shooting for the documentary when news broke of the BP oil rig explosion. That same week USA Today had featured Turkey Creek on its front page to commemorate the 40th anniversary of Earth Day ("For them, Earth Day was late in coming"). It was this article that apparently caught the attention of The Daily Show.

My best hope is that The Daily Show video about Turkey Creek (“Bird Like Me”) prompts people in their outrage to find out more about Turkey Creek and the reality of the environmental justice movement there. If you’re interested, you might start here:

Read about Rose Johnson, an inspiring community leader who was baptized in Turkey Creek and served as chair of the Mississippi chapter of the Sierra Club.

Read about how Mark LaSalle – who was daring enough to play “Mr. Audubon” in the Daily Show piece – has actually built a respectful alliance with the Turkey Creek community.