Listen: exploring the connections between women's rights and immigration 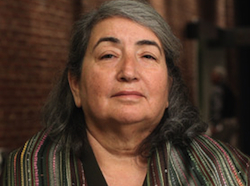 Houston resident Aurelia Suchilt was detained two times, for more than two months each, in Immigration and Customs Enforcement (ICE) facilities due to mistakes in bureaucratic paperwork.  Iconic immigrant's rights activists Maria Jimenez (right, photo by Joshua Cogan) says women like Aurelia are leading the defense of people detained by ICE.  Listen to these interviews, and more, in a radio segment I produced on women's rights and immigration.

The piece aired last week as part of Women's Day, a radio archives special on women's rights that was simulcast on Pacifica Radio stations nationwide.

Here are some excerpts from the interviews.

"Women's rights – I think it's integral to the whole process of migration.  Many women have migrated, particularly from areas where there's natural disasters or war.  Many of the pioneers in defense of people detained in facilities are women.  I remember two cases particularly, a Mexican woman in Arizona, Blanca, was stopped by a border patrol agent who rapes her….  The U.S. authorities… refused to charge the border patrol agent… Blanca did not desist.  She filed legal suit against both the agency and against the agent.  At this trial, it turned out there were about four or five other women that came forward.  The same agent had raped them…

"Those are some examples of women who decide to fight back, and give the example of how resistance is an important part of asserting your rights.

Aurelia Suchilt talks about the first time she was detained due to bureaucratic mistakes, in 1999:

"I was on my way back from Mexico, and they detained me in the airport.  And they said 'Ok, tomorrow, when we resolve what happened to you, you can be released.'  They tell me one night, and the night became three months.  And I have three girls…

You have to wait for the hearing and that could be two weeks, a month. The room where I was: 17 beds, 2 toilets, for 34 women. They don't have doors in anything.  You don't know the time because you don't see the sun… It was crazy… I passed Mother's Day inside.  It was horrible… [I thought] 'It's enough.  I need to see my kids.'

And I tell the girls, "We're going to talk to all the media." And we start just calling, calling, calling.  And we said, "We are here, we're going to start a hunger strike."  We started a hunger strike for 16 days… After 10 days they take out five girls. They start to release one or two women every day.  I was almost the last one.  But when I left, they apologized to me for the confusion. And they gave me my green card."

Three years ago, she was wrongfully detained again.