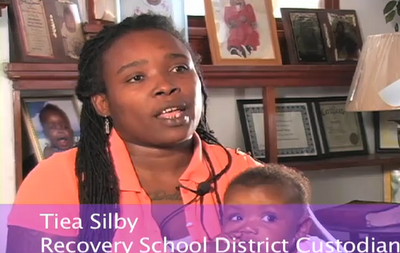 Crossposted from Justice Roars.  Since the loss of many of its manufacturing jobs since the 1960s, New Orleans has become synonymous with low-wage work in the service industry.

It wasn't always this way. New Orleans is a city with a long history of labor activism, including some of the nation's first multiracial labor unions. Much of the city's culture - like the Po' Boy sandwich, which was birthed during a strike of streetcar workers - comes from this history of working-class resistance.

But as rents and other expenses have risen post-Katrina, the city's low wages have remained stagnant while public services (like mass transit) have been cut, and it has become even harder to pay your bills from a full days' work in this city.

In this context, New Orleans is a key battleground in the national struggle for fair wages. And in that struggle the giant international food service provider Sodexo has become a symbol of corporate profiteering at the expense of local workers.

Sodexo is a major contractor in Louisiana, with accounts at both public and private institutions including Tulane University, Loyola University, Southern University of New Orleans, and the Recovery School District.

For almost two years, Sodexo workers and students at Tulane and Loyola University have been fighting for better workplace conditions and have faced retaliation and intimidation. The cafeteria workers earn as little as $8 an hour and many lack access to affordable health insurance. While the workers experience unfair working conditions, Sodexo continues to profit, posting more than $1 billion profits in 2009.

Sodexo also recently eliminated 33 custodial positions, and reduced dozens of full-time jobs to 20 or 30 hours a week, forcing many full-time workers further into poverty. Employees say this forced them to choose between working extra hours for free, or leaving the school they work at in unacceptable condition.

Despite the company’s stated commitment to rebuilding New Orleans, recent evidence suggests that Sodexo has illegally overcharged its clients, the cost of which is ultimately borne by the community. The New York Attorney General recently settled a $20 million law suit in which Sodexo was accused of illegally overcharging public schools and universities by failing to acknowledge or pass on volume discounts obtained on their clients' behalf. The Attorney General’s investigation found that in New York, Sodexo promised to provide goods at cost but failed to acknowledge rebates from suppliers, resulting in illegal overcharges.

As our city is faced with ever-increasing financial insecurity, it is more important than ever that we make sure contractors are held accountable for their behavior.

Cutting waste, fraud and abuse by contractors – and capturing every dollar due to local workers – may help prevent at least some of the budget cuts to vital public programs. Standing up to Sodexo and forcing them to pay living wages - or giving the work to local companies with both better pay and without Sodexo's history of fraud - would be an important step towards a real recovery for our region.