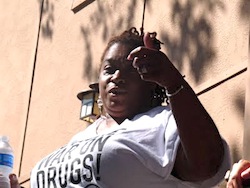 Crossposted from the Louisiana Justice Institute. Louisiana's era of forcing certain convicted sex workers to register as sex offenders appears to be over. Governor Jindall's office announced today that he had signed into law a bill, sponsored by Louisiana State Representative Charmaine Marchand Stiaes, that effectively moves prostitution convictions back to the level of misdemeanor.

The majority sentenced under the law were indigent women of color and transgender women of color. Once convicted, they were also forced to register as sex offenders, which brought a long list of restrictions and requirements, including having the words "sex offender" printed in large letters on their driver's license, and the obligation to send a post card to all of their neighbors informing everyone of their conviction.

The new law does not eliminate the "Crime Against Nature" category entirely, but it makes the penalties equal to the misdemeanor-level prostitution charge.

While police continue to harass sex workers across the state, and many women are still imprisoned under these regressive laws (even as US Senator David Vitter faced no penalty for his admitted liaisons with prostitutes), this is a step forward. And much credit should go to the NO Justice Project, convened by Women With A Vision, which worked to raise awareness about this unjust law and fought on multiple fronts to bring it to an end.

In a statement from the NO Justice Project released after the law was signed, Davida Finger, Assistant Clinical Professor at Loyola said, “We welcome this change in the law, which finally brings Louisiana in line with every other state in the country. But the injustice still persists. Almost 40 percent of registered sex offenders in New Orleans are on the registry because of a Solicitation of a Crime Against Nature (SCAN) conviction. They too should receive the benefit of this change in the law and be removed from the sex offender registry.”

Women With A Vision Executive Director Deon Haywood (pictured) added, "We will continue to fight for justice for all those still living under the penalties of the past. There is still serious work to be done.”

“The grassroots and national leadership of Women with a Vision in tirelessly raising this issue for the past three years is nothing short of heroic,” said Andrea Ritchie, co-counsel in Doe v. Jindal, police misconduct attorney and expert on U.S. policing of women and LGBT people. “This victory is a product of collaboration between community groups, legal advocacy organizations and legislators seeking justice on behalf of the women and LGBT youth suffering from the discriminatory effects of SCAN – it is clear that community organizing can make real change.”

Women With A Vision urges those who have SCAN charges on their record and currently are on the registry to contact them at 504.301.0428.