My goal over the next couple of days before setting off to Biloxi, MS,  for the GCERT and Gulf Future meetings, is to spend every waking moment hugging on my babies. But, I did want to take a minute, as they sleep, to tell you a little about 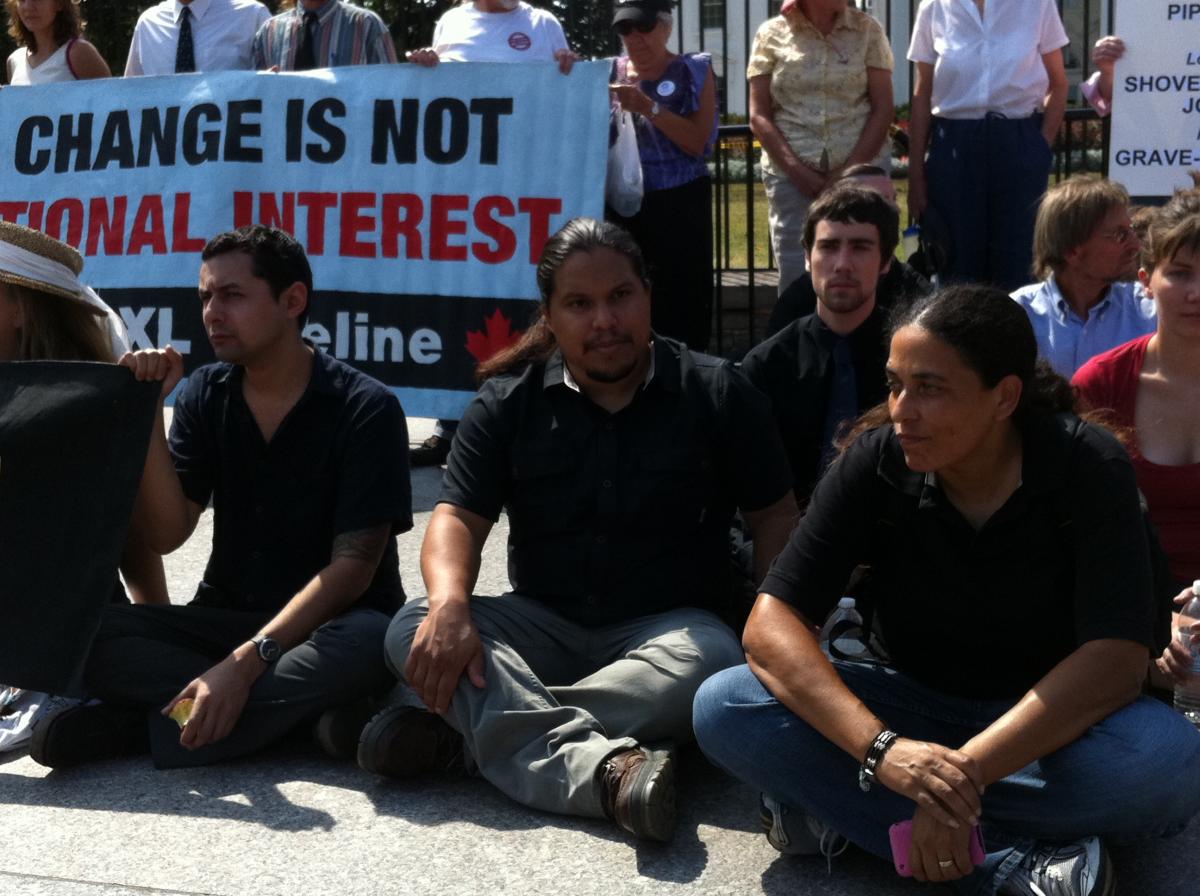 the last few days in D.C. and N.Y. and how proud I am to have been a part of it.

I won’t go too much into the Tar Sands and Keystone XL Pipeline, if you have been paying attention at all, you know how devastating this is going to be - if it is completed, to our communities from Canada to Texas. I implore you to educate yourself and get involved with protecting our country from what is basically a continuous assault on our health and environment, let alone basic sensibilities.

Honestly, I had no prior plans on getting arrested. As you know, it was not so very long ago that I was in handcuffs in NOLA, and I was worried about implications from one case to the other.  Yet, I did want to stand in solidarity with those opposed to the pipeline, and especially with our Gulf Coast communities in Texas who, as I stated before, have long bore the burden of energy production in the United States. It is too high a bill to pay, I am sure you will agree, when the cost is human life and sadly, and in too many instances, our coastal communities have been paying that cost for decades.

We were told that we could come and sit, and that there would be 3 warnings by the police before arrests were made.

First warning came, and I looked across the crowd of people.. sweat pouring off of brows, nervous smiles, holding of hands, elderly with canes, a fist clenched, a hand waving, an intense contemplative gaze, chanting.

Second warning came, and I looked beside me to my friend, Bryan Parras, a Houston resident, advisor for the Gulf Coast Fund and leader with Texas Environmental Justice Advocacy Services (TEJAS). He was smiling, (he usually is). Bryan, and his colleague Estaban, had already shared with us that they were going to go all the way in their commitment to protect the communities of Texas.  I was thinking of how much I respect him, for all the sacrifices he has made in defense of his community, and our Gulf. Working on these issues much longer than I, after all the losses and successes, here he was, making a stand by sitting for our entire nation. I was proud to be beside him in that moment.

I began to think about all those lives already lost in the Texas communities, in the Gulf Coast communities, across the nation, across the globe. And I remembered of the many times we all speak of “unity“, “inclusion” and “solidarity“.  Were they hollow words? Is unity something that you say when you want someone to join your cause? Are we really one Gulf? One nation?

Third warning, the final shifting of feet, last minute checks for ID’s in back pockets, butterflies in your stomach.. decisions.

I was number 26 arrested that day, the last of the women, out of over 50 participating.

As they took our info, they loaded us tight into a barely air conditioned police van - eight woman in a row on one side, eight more on the other, with an iron wall between us. It was tight, and hot, and claustrophobia held us for a few seconds, before the women on the other side of the van, who we could not see, began singing.

Singing beautiful words, about not being stopped, about the folly of taking our bodies to lock up while our spirits ran free. It was beautiful. That is unity, I saw it, and it came to me through misty eyes.

As we arrived, and the engine was shut down, and we were left without air for a few very uncomfortable minutes, we all began to talk.

“Where are you from?”

So, I hadn’t planned on being arrested that day, which is why I only had 30 of the $100 needed to get out of jail. After we were led into holding, I mentioned my dilemma to a few people. Adding that, I was not worried because I knew well that my Gulf Coast people out side were going to get me out. They had my back, but I may have to stay for a while over, I told them.

A lady, whose name I am ashamed to say I cannot remember, moved her zip tied hands from behind her back to her side pocket, almost loosing her balance to pull out $10 that she had over her $100 and gave it to me.

And then the young woman from D.C., who I had also seen at Power Shift, she gave $5.

And the lady whose 80th birthday it was, she pushed a twenty into my pocket.

Followed by most of the others, soon I was turning down ladies who wanted to contribute. In five minutes, I had all that I needed to walk out.

My sisters, all of whom I had just met, with hands banded behind them, and yet they were picking me up, you see?

Along with them, I would like to publicly thank with all the sincerity I have in my soul, the people of 350.org, including Rae, Linda and Bill. And especially the rest of the Gulf Coast delegation, including:  (and please forgive me if I leave out anyone),  fellow inmates Bryan Parras and Estaban Tovar, Fritzi Presley, Aaron Viles, John Herrrera, Vinisha Patel, Charles Taylor, John Gooding, Mandi Thompson, Michelle Chauncy, Kelly Head, Andre Gaines, Jonnaa Hilbun, Chuck Brady, Karen Savage, Paul Nelson, Drew Landry and more, who bravely brought their voices and hearts to defend and protect us all.

More info on the wonderful contributions from these great people later. For now… We Shall Overcome!

“Nonviolence is the answer to the crucial political and moral questions of our time: the need for man to overcome oppression and violence without resorting to oppression and violence. Man must evolve for all human conflict a method which rejects revenge, aggression and retaliation. The foundation of such a method is love.” - Martin Luther King, Jr., Nobel Prize acceptance speech, Stockholm, Sweden, December 11, 1964