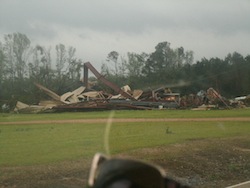 Like Holt-Peterson Road near John Wathen's place outside Tuscaloosa, I have seen total destruction in nearby Alberta City and Crescent Ridge Road, in Birmingham's African-American community of Pratt City (approximately 7,000 homes), and elsewhere.

The question that folks who want to volunteer or send relief must begin to ask is not "how hard was xx hit?", but "where is there NOT a steady flow (or even an over-abundance) of relief?"

The Answer is: "in a very large, buck-shot pattern of isolated, mainly rural, poor black and white communities that are not in or necessarily near the cities of Tuscaloosa or Birmingham."

Created by so many different tornadoes, the physical geography of this federal Disaster Area is not at all like "Katrina-RitaVille" (the Gulf Coast from Alabama to Texas) - where you could simply drive east or west from any exit on I-10 or US 90 to find a long and unbroken string of physical destruction and human need; a continuous zone where you could drop off relief supplies pretty much anywhere.

This is instead like a whole bunch of needles in a giant haystack. In most places, you can't even sense the slightest hint of regional mayhem until you arrive right up on the destruction somewhere. 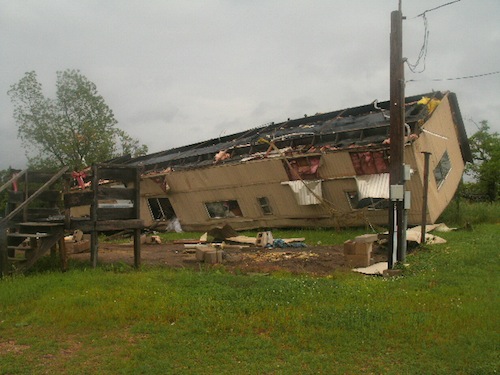 Photos of destruction near Europa, Mississippi, where no relief has reached, by Cherraye Oats.

This is one reason why emergency relief and volunteers are rolling in like waves to certain places (especially ones that have been in the national news), but not to others. We are working to address this on our nightly 6pm conference calls and other efforts.

It also why we need to finish the very difficult task of developing a regional, multiple-state map of the many hard-hit poor places located on the county roads, rail lines and pig paths where relief is simply NOT hitting the ground - such as in pockets where 20 and 30 homes are wiped out and there is no cell phone, internet, or TV news getting in or out. The people who know best where need is severe and unmet are themselves the ones in need, and it has not been easy to locate, communicate and coordinate with them. But we are trying.

On a positive final note, thanks to the speedy and combined efforts of many Gulf Coast Fund grantees, Gulf Coast Waterkeepers, Gulf Coast residents and others over the past week, "Cousin" John Wathen will be up and running real soon. He has been inundated with emergency relief items and now simply needs physical labor and administrative support for assisting his Holt-Peterson neighbors.

Hopefully we can soon say the same of other isolated places. Thanks. 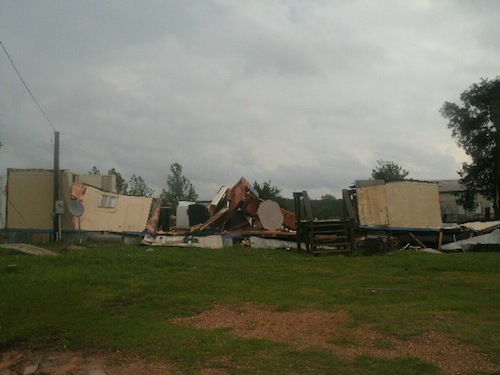 Derrick Evans is the director of Turkey Creek Community Initiatives and an advisor to the Gulf Coast Fund for Community Renewal and Ecological Health. Since 2001 he has worked to help protect and revitalize his coastal Mississippi community and sister communities throughout the region. Prior to that he taught civil rights history at Boston College and social studies in the Boston Public Schools.