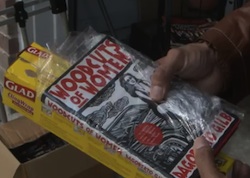 The caravan will be filled with authors and activists who will be taking banned books back into Arizona, to give to students.  The bus will include banned authors, new authors, as well as concerned advocates of First Amendment rights of Equal Protection and Freedom of Speech.

Earlier this month, the Tucson Unified School District suspended its Mexican American studies classes.  John Huppenthal, the State Superintendent of Public Instruction, ruled that the classes were in violation of a state law that bans ethnic studies, HB 2281, signed into law in May of 2010.  Subsequently, the school district released a list of books, mostly by Chicano and Indigenous authors, that have been boxed and removed from classes, effectively banned along with the Mexican American studies program (see the list here: http://americanindiansinchildrensliterature.blogspot.com/2012/01/mexican-american-studies-department.html).

The Librotraficantes Banned Book Caravan will be making stops in Texas, New Mexico, and, of course, Arizona.

Banned writers have embraced the caravan and will participate along the route, including Mac Arthur Genius recipient Sandra Cisneros, who kicked off our fundraising efforts by making a generous donation; Guggenheim Fellow Dagoberto Gilb, whose work recently appeared in the New Yorker and Harpers; and best selling author Luis Alberto Urrea, who was the first to enthusiastically support the project through Twitter.

The caravan is intended to:

1.    Raise awareness of the suspension of the Mexican-American Studies Program and the removal of banned books.
2.    Promote banned authors and their contributions to American Literature, Non-Fiction and Poetry.
3.    Celebrate diversity: Children of the American Dream must unite to preserve the civil rights of all Americans.

Founded in 1998, Nuestra Palabra: Latino Writers Having Their Say has gone from the party hall of Chapultepec Restaurant to Exhibit Hall F of the George R. Brown Convention Center. Today, the entire city is our forum. When we began, we were told that there was not an audience for Latino literature. We are thrilled to say that today the largest book events in Houston are Latino events. We are proud to bring you Houston's contribution to the Latino Literary Renaissance.