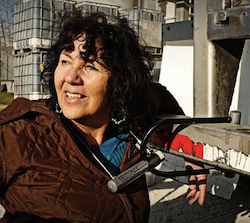 On Monday December 3rd, Diane Wilson walked out of the Harris County Jail a free woman after being arrested for blockading a Valero Refinery. But her act of civil disobedience didn't end there: she's been on a hunger strike for 13 days, and says she won't stop until Valero divests from the Keystone XL pipeline.

Wilson, an environmental activist and fourth generation shrimper, along with friend Bob Lindsey, was arrested November 29 after securing herself by the neck to industrial trucks, effectively blocking the Valero refinery in the Manchester neighborhood of Houston, Texas. They were protesting the Keystone XL Pipeline, the southern leg of which is now under construction. On the same day, the pair began a sustained hunger strike, which they are still on.

The community of Manchester, which Wilson and Lindsey were standing up for, is predominantly Latino and low-income - an environmental justice community that has been dumped on by industry because poor communities and communities of color are still the easiest to exploit in the United States. In fact, there are low-income communities from the tar sands in Canada, all along the route of the Keystone XL Pipeline, to Port Arthur, Texas. Wilson and Lindsey's arrest in Manchester recalls the legacy of white freedom fighters who risked arrest, and sometimes their lives, to join the Civil Rights Movement.

“All my life the Gulf Coast has been an environmental sacrifice zone, and enough is enough. Keystone XL will bring the dirtiest fuel on the planet right down to the Gulf, where already overburdened communities like Manchester will be forced to suffer even more. After decades of toxic air in Manchester, I refuse to just let them continue to punish this community. I won’t eat until Valero divests from Keystone XL.”

Wilson and Lindsey join a growing number of people who have been arrested challenging the merits of a project which is known to cause severe ecological and human health related harm, while essentially trampling on indigenous and land owner rights across North America.

The timing and the geography of these actions are of little surprise to those familiar with past movements for justice within the United States. Where else but the South, on historic battlegrounds of massive civil resistance, would you expect to see new resistance to injustice rise?

Where else but the Southern soil, where the seed of many human rights violations has been known to grow and flower so freely, would people be forced to take a stand for their environmental equality?

And just like the unjustifiable decisions of times past, it would be a tragic and immoral mistake for those who have continuously been crushed by the propaganda machine to not heed these recent moments as the authentic birth of a movement. This period of time, once again, requires the rising up of the citizen from the hallows of indifference and apathy, if only because the similarities of human and civil rights history demand it.

It is with the same voice as our combined ancestors that we must again call for the righteous evolution of the spirit, and the ethical progression of public policy to raise the bar of human existence and experience.

It is in the words of Woody Guthrie, when he asked, “Is this land made for you and me?”

It is in the resonance of Margaret Mead, when she explained that, “a small group of thoughtful, committed citizens can change the world,” and reminded us, “it is the only thing that ever has.”

And it is the 1961 words of Dr. Martin Luther King Jr. when he, “looked confidently to the day when... we bring into full realization the American dream – a dream... of a land where men [and women] will not take necessities from the many to give luxury to the few.”

In this case, the necessity we speak of is fundamental to all life – air, water and soil. The only difference in the struggle now happening in Texas is that the stakes are higher than they have ever been. Once again, we find ourselves in a transition state, and once again it is up to us to usher in the moral evolution of our species.

In fact, the game plan on both sides has changed little. Nearly 150 years since the National Labor Union was established, energy workers across the nation are sacrificed by corporations whose hourly profit far exceed the cost of the working man's funeral.

Over a hundred years past the cold corpses of indigenous people laying still at Wounded Knee, the hand of oppression lingers on the violation of sacred sites, the destruction of the natural world, and epidemic laden blankets - now woven from polluted air and water.

Some 45 years since Dr. King announced the Poor People's Campaign, which sought governmental intervention to end widespread poverty, humanity still struggles with the crippling economic depression of the many, while a few continue to wallow in the generationally inherited wealth so easily obtained through the pipelines of oppression.

And again we are seeing the sacrifice and martyrdom of those who stand to address these injustices. From the participation restrictions placed on recently released advocates who have performed nonviolent direct action, to the murders of more than 350 earth defenders in the last decade, across the globe, we continue to see the subjugation of our fellow humans who are brave enough to rise and speak out.

I am of little doubt that the arc of justice will once again find its way back to the hands of the righteous, nor am I surprised that some will most likely pay the ultimate price for that appeal. This is the way it has always been – that there will be those who will be asked to sacrifice with dignity, for the dignity of those who are being sacrificed.

It is painful. It is real. It is freedom.

Stay strong, Bob and Diane, we are with you.