No Safe Harbor in Alabama 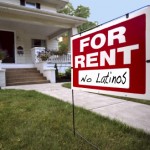 By Hannah Adams, crossposted from The Greater New Orleans Fair Housing Action Center Blog.  A little over four months ago a federal judge upheld most parts of the nation’s harshest anti-immigration law to date- Alabama’s infamous House Bill 56 (HB 56). The law has already begun to impact families in Alabama in big ways, and a lot of groups have been doing some strong organizing against it. On February 14th the Alabama Coalition for Immigration Justice will kick off a series of lobby days to convince legislators to overturn the law. Among other things, I have an ongoing concern about the fair housing implications of HB 56 and similar anti-immigration legislation.

A quick recap since it’s been a few months- under HB 56 law enforcement officials are now able to check the immigration status of anyone they reasonably suspect is in the country unlawfully (a similar provision was blocked in the case of Arizona’s SB 1070 because of the implication that it would lead to rampant racial profiling.) Also, public elementary and secondary schools in Alabama can now verify the immigration status of enrolling students and potentially their parents. The law will likely wreak havoc not just on the lives of undocumented Alabamians, but also on the lives of documented immigrants and even U.S. born Latinos who will be vulnerable to profiling. It’s clear that in the wake of HB 56, many Alabama residents may no longer be safe walking down the street, driving their cars, or even sending their kids to school.

They may not even be safe in the most sacred of safe spaces- the home.

Unfortunately, the Judge left intact another worrisome portion of the law that impacts access to safe, affordable housing for undocumented immigrants (or anyone who might be mistaken for one.) HB 56 nullifies all contracts between undocumented people and other individuals, which of course includes leases. The Southern Poverty Law Center says that they have already received many calls from families asking if their landlords can terminate their leases and kick them out of their homes under the new law. A lease is a tenant’s protection, not just against unfair eviction, but also against abuse and negligence on the part of their housing provider. Even in states like Louisiana where tenants don’t have a lot of rights, a lease is still a contract that holds up in court. If such contracts can be nullified or violated with impunity, the impact on families could be devastating. And of course if landlords start treating some tenants differently than other tenants based on their national origin, then that could be a violation of the Fair Housing Act.

It’s clear that in the current legislative attack on the lives of undocumented individuals threatens the right of every family to safe, sanitary and affordable housing. Those of us who believe in this fundamental right must continue to stand in solidarity with those most affected by laws like HB 56.

Listen to the This American Life story “Reap What You Sow” about the impact of HB 56 on Alabama families here.