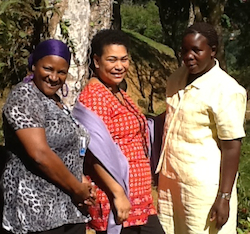 When the plane set down in Rio de Janeiro, I thought, "Wow, this is like the movies."  I had never been to Brazil before. But what I was really excited about was reconnecting with my sisters from developing nations across the globe. I had met several of these incredible women back in 2009 at the United Nations Summit on Climate Change in New York City. Here we were again, in June 2012, brought together by the network Climate Wise Women to take part in the Rio+20 Partnerships Forum, part of the United Nations Conference on Sustainable Development.

We reunited on the panel “Rio+20 and Women’s lives: A Cross-General Dialogue."  My friend Constance Okollet, who lives in Uganda, spoke about the drought, brought on by climate change, that is devastating her community. All of these acres of land are growing no food, just nothing. The government's response is to give out rice, but the rations are small. Constance has five daughters and two sons – that's a lot of mouths to stretch that food across. They go hungry until the next day. Constance says if they had some well where they could get water, at least they could water some of their crops. But the wells are all dried up because of the drought and their crops have been destroyed.

Though I've never experienced a drought like that, Constance's story reminded me of home. It made me think about when Katrina hit, and Salvation Army and Red Cross didn't come to the predominantly Black area in Biloxi where I live. Water wasn’t available. People had to walk to try to find bottled water. There was no pro-active plan in place to take care of the people. How can that be? Water should be on the ground, food should be on the ground. (Unfortunately it hasn't changed much since Katrina, as Hurricane Isaac showed us).

When Constance described lining up for government rice rations, it reminded me of the EBT cards the government gave out after Katrina. It didn’t matter if you were on assistance before – everyone in line needed the same services in the face of disaster. In Uganda, even families who had their own lots of land were lining up with those who didn't – people who hadn't been connected before were now in the same line. Rich and the poor were in the same line, just like in Mississippi waiting for that EBT card. But on the Gulf Coast, the rich and the poor separated again, and the recovery money benefited real estate developers rather than poor folks in need of homes.

At times it was a struggle for me, as a woman of color from the United States, to be surrounded by these women because they thought the U.S. does not have the same challenges. They thought that when there is a disaster in the United States, everything is taken care of, that you got water and electricity free. My words to them were, we have many similar challenges, being women of color and in poverty-stricken areas.

In coastal Mississippi, we’re facing coastal erosion and rising sea levels, and often it is poor, Black communities that have been relegated to the most flood-prone areas. During Katrina, I simply had no means to get to higher ground, and as a renter my housing needs were not addressed by the government after the storm. Across the globe, it is poor communities of color where the recovery and relief efforts either fail to reach, or make our survival harder. It is also women who bear the brunt of climate change.

When Constance is on panels and surrounded by global leaders, they pledge to help her. But she gets back home she can't use the internet, because it is nowhere close to where she lives. She might get to a computer once or twice a month, and she doesn't know computers as well as her husband does. She sends her food stipend from conferences home, because her family needs it. At home, she says she gets up at 5:00 a.m and goes to bed at midnight after a day of endless hard work – preparing the meals, getting her children and husband ready for work, tending to animals. Partially the drought is making her work that much harder for her to provide for her family. She said there's no seasons anymore, just a weird type of heat, drought, or flood, so people can't grow their food.

But Constance's long days are also about being a woman. Women in Uganda and India are facing so much oppression. I felt so hurt that she and all of my sisters abroad had to suffer that way, but that is a way of life for them because they are women. Climate change is making it harder for people to survive, and we women are bearing the brunt.

Though there are definitely differences in our experiences, I feel oppression as a woman of color in the United States too. Too often, men assume I'm the secretary. Yet, the majority of women I know in Mississippi are head of their households. They are the ones who make the decisions for the children. Women are trying to figure how to get their kids to school, how to feed their children, how to house them safely. After Katrina, it was women coming to the table, asking those questions, worried about the formaldehyde in FEMA trailers, children with asthma. We lead the way, but we don't have a seat at the decision making table when it comes to policies that will affect our lives.

Connecting with all these women who are facing similar issues across the globe, and standing up and working for solutions, is inspiring. All these women in developing nations are leading the fight against climate change. I see more perseverance in the developing countries that in the United States. I see more fight, in India, in Uganda. More walking the streets, more "by any means, let's get this done" attitude. We are so mentally drained in the United States - we don't fight. We often just let things happen to us. My response is, "No! You have rights!"

My goal is to have more women of color speaking to Congress about the effects climate change has on poor communities. We need to educate ourselves about climate change. We need a voice and funding for the future of our communities at large. We should be at the decision-making table, deciding how and when money should be given after a disaster, how to adapt to our changing climate. Why shouldn't we be first? Why shouldn't we decide what grassroots organizations that will support our peers should get resources?

Another one of my sisters from the developing world is Ulamila Kurai Wragg, from the Cook Islands in the Pacific Ocean. She is an incredible inspiration. She left her career as a professional journalist to become an activist, because she saw how quickly her land is eroding and wanted to do something about it. It is something to see and hear people that go through that.

Ula is teaching kids on her island how to journalism and do media writing. She is fighting for education for her people, and when she travels she tells people not just to support the Cook Islands, but "be a part of where you live." Ula wants to build a library for the children on her island, and asked if my organization, Coastal Women for Change, can give books. I have plenty of books to donate, but don't have a means of sending them. If you can help with the cost of sending them, please contact me.

Just as I'm trying to support her, Ula has supported my work. When I first met Ula, I talked about obesity being a problem in my community. She pushed me towards starting our community garden in Biloxi. These women get me to think about climate change, about international issues, about fair trade - they give me all these ideas. We get closer to closer over time. They call me "Mississippi Girl." Ula want me to go to the Pacific Islands, I want her to come to Mississippi.

So these women have pushed me to think globally, and helped me act locally, and I try to do the same for them.