5-Year-Old Chemical Spill near Mobile, AL Continues to Sicken Residents, Could Take Years to Clean Up

It’s a pungent, nauseating smell, so strong you can literally taste it.  For nearly two years, it has blanketed the Eight Mile neighborhood of Prichard, Alabama, a predominantly African-American community just outside of Mobile. The overwhelming odor, a combination of rotten eggs, onions, natural gas and skunk, permeates residents’ homes, cars, and even their bodies.  It makes eyes water, irritates skin, closes airways and makes it difficult to breath, even to think.

Community members and those who work in the area began to report the gas-like smell to authorities in July of 2011.  At the time, Mobile Gas, which is owned by Sempra Energy of California and provides natural gas to the area, sent representatives to individual homes to check for gas leaks from appliances.  When no household leaks were found, Mobile Gas offered no additional information about the smell, which had begun to encompass the entire neighborhood.

Days and weeks went by and the smell continued. Residents repeatedly called Mobile Gas, but grew tired of letting representatives continue to search their homes for non-existent leaks every time they reported the smell.

“We had one homeowner who told Mobile Gas, ‘look, you been here five times and you’ve found no leak, ” Eight Mile resident and community leader Jeremiah Hollins explained, “Mobile Gas told that person, ‘well, if you don’t let me in your house, we’ll have to cut your gas off.”

Initially Mobile Gas did not identify the source of the smell, but they did repeatedly and adamantly deny it had anything to do with their operations or their nearby Whistler’s Junction facility, which they lease from Gulf South. Whistler’s Junction is a convergence of underground pipelines that’s been in the area since the 1930’s.  Natural gas is piped into the facility where mercaptan, a chemical that gives natural gas an odor so leaks can be detected, is mixed in. The gas is then sent out to the Mobile area.

In early 2012, after several months passed with no explanation for the horrific odor, community members requested independent testing. The smell was affecting residents’ health and their ability to carry on their normal daily activities.  It was unbearable to be outside in the evenings or early mornings when the smell was the strongest and some members of a local church could no longer attend services.

Rob Klene, with the University of South Alabama, determined the smell was mercaptan.  Mobile Gas is the only company in the area that uses or stores mercaptan.  Because methane, present in natural gas, was not detected in the area, he was also able to eliminate the possibility of a gas leak.

Hollins, a truck driver, used to spend days away from home, “I’d be gone six days and come in three days, so basically I wasn’t effected until I got home.  When I’d get home I’d get sick, sometimes to the point I couldn’t leave. But after I’d leave, 30 minutes down the road, when I’d get a chance to get some fresh air, I’d be all right.”

He says the mercaptan has given him bronchitis and shortness of breath. His doctor has changed his medication several times in the past year and he’s been referred to a lung specialist. Humans aren’t the only ones suffering. A nearby resident awoke one morning to find his eight chickens dead, and residents say several dogs have died.

Ann Holbert, a member of a local community group called Prichard Community Watch, said her health problems started in 2010, with hoarseness, irritation of her nose, headaches, and sharp pains in the head. Last summer a black mark appeared on her neck and her face began breaking out into scales. She says she's never had health problems before.

Holbert, who has lived in Eight Mile since 2009, says "thick black stuff" rings her toilet bowl from the water, and "Brushing my teeth in the morning, when I get my glass of water, it smells like gas."

At a community meeting in April 2012, nearly a year after the smell was first reported, Mobile Gas admitted to a June 2008 mercaptan leak, reportedly caused by a lightning strike.  The incident, which at the time was reported to the Alabama Department of Environmental Management (ADEM) but was not reported to the National Response Center, involved a still-disputed amount of mercaptan.  When contractors called in by Mobile Gas to clean-up the spill found evidence of a much larger than anticipated leak, clean-up ceased.  Recent court documents reveal that the smell of mercaptan at the site was so strong it penetrated through workers’ respirators.

Dr. Subra’s report puts those numbers in context: “On a yearly basis, Mobile Gas used 335 pounds (2004) to 636 pounds (2005) of mercaptan and yet they lost more than 6,000 pounds of mercaptan in a six month period.” Although legally required to report any loss greater than 100 pounds, neither the missing mercaptan nor the lightning strike spill were reported to the National Response Center.

In 2012, four years after the mercaptan release, air, water and soil downhill from the spill all tested positive for tert-butyl mercaptan and other related chemicals.

Mobile Gas declined to comment on either incident due to ongoing legal proceedings.

Scott Hughes, a spokesman for the ADEM said the mercaptan seeped down into the ground water, which in the area is typically 30 - 40 feet deep. He explained that the smell is from a nearby natural spring, which brings ground water – and with it mercaptan - back above ground, thus releasing the odor into the air.  The agency has ordered Mobile Gas to collect and deodorize mercaptan from the spring, which is currently covered with a tent-like structure.

ADEM is collecting samples in monitoring wells up to 80 ft. deep in order to devise a clean-up and remediation plan for contaminated soil and water. Hughes said once ADEM determines how widespread the mercaptan is, clean-up will take "a lot of time, not 6 to 12 months, it could be a couple of years or longer."

That's in addition to the five years that have gone by since Mobile Gas lost more than 6,000 pounds of mercaptan and since the spill associated with the lightning strike was reported to ADEM.  Subra says the situation is typical of the way minority and/or low income communities are often treated. "Eight Mile is another example of agencies and the responsible industry moving very slowly in addressing the issues that are causing damage to environmental justice communities and having extensive human health impacts."

In April 2013, I visited Beaver Lake and Beaver Pond, where water testing revealed the highest levels of tert-butyl mercaptan. Beaver Pond sits behind the Gethsemane Cemetery and is surrounded by heavy woods. The dark water was eerily still and covered with a glassy, brownish green sheen. 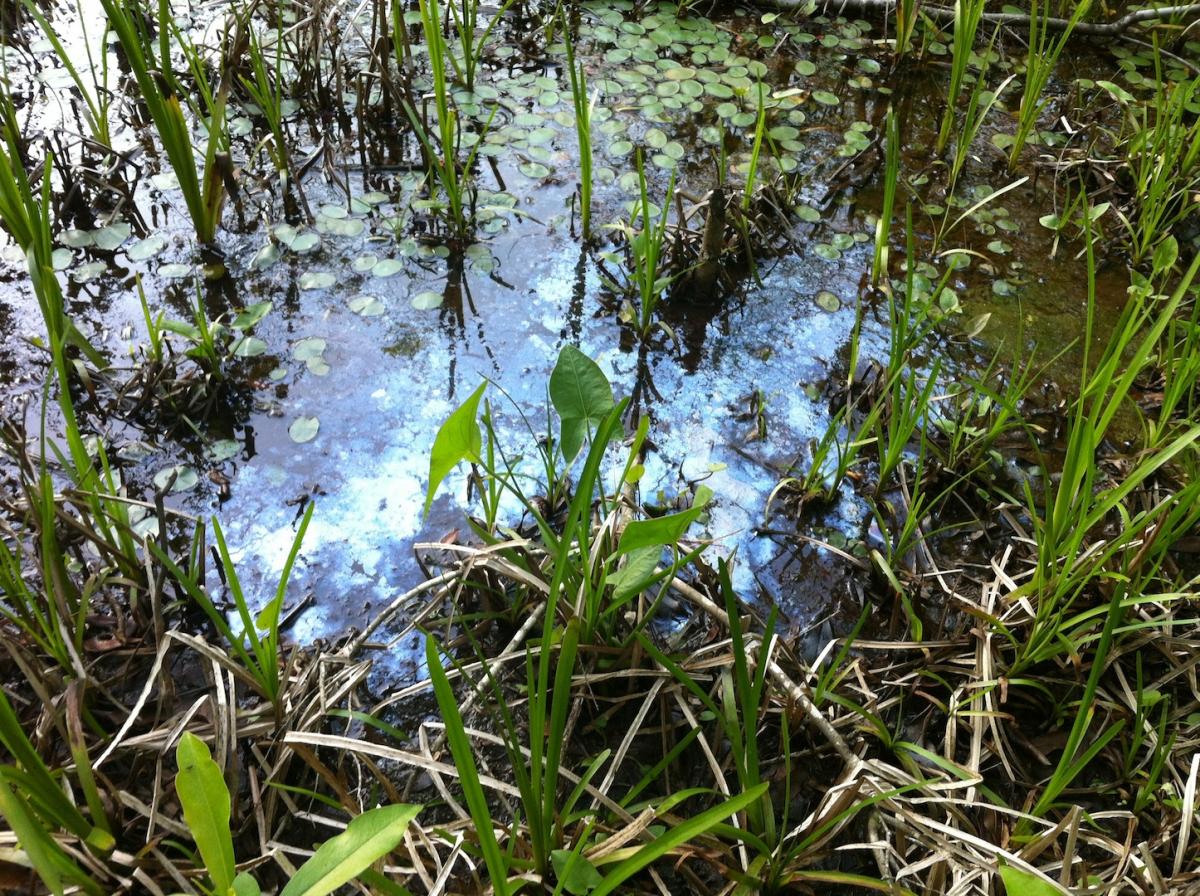 And although ADEM says the smell has improved, the pond is still surrounded by a heavy, penetrating, pungent stench that causes the skin to itch and literally takes your breath away.  And it is silent – no singing birds, no croaking frogs, no buzzing insects.  Brown frothy foam and a milky white substance are visible in a nearby stream.

Ann Holbert, whose house is right next to Beaver Lake, says there's a fog over the lake some mornings that she and her neighbors assume is from mercaptan.  Some say the smell is as strong now as it was nearly two years ago.

Health issues and the nauseating smell persist. "It's every day,” says Holbert. “Many people have been getting ill… Some have even passed away, but you know you can't really pinpoint that."