In Alabama, Community Founded by Former Slaves Now Under Siege By Tar Sands 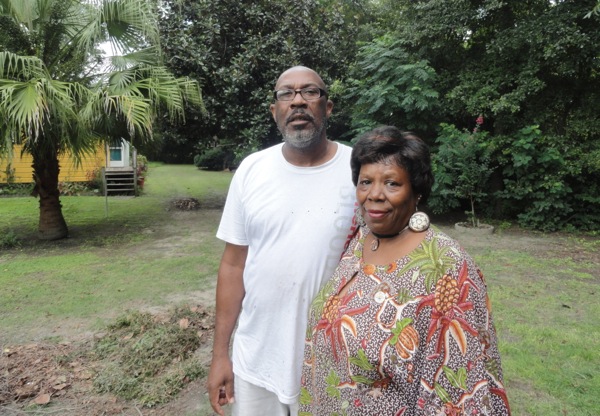 Some people might stand in the shadow of Mobile, Alabama's Cochran-Africatown Bridge and see nothing but the sprawling tank farms, barges and coal terminals that clutter the Mobile River's banks, stretching northward from south of downtown to historic Africatown and beyond.

Others might see Plains Marketing’s looming terminal and wonder if its giant storage tanks hold some of the millions of gallons of toxic tar sand oil (also known as bitumen, dilbit or heavy crude) that arrive in Mobile each day on Canadian National trains.

But Lorna Woods, a 5th generation direct descendant of Africatown’s original residents sees the place where her great-great granddaddy Cha-lee and his brother Cudjoe first set foot on North American soil after a long, harrowing journey from Africa. She knows that Africatown’s roots grew out of these formerly lush marshes along the mighty and once-pristine Mobile River.

“That’s the trail that when they brought the slaves off the Clotilda…they brought a boat under where the Cochran Bridge is now, they took ‘em off and brought ‘em up the hill”, she explained, pointing toward the river.

The trans-Atlantic slave trade had been outlawed for more than fifty years when wealthy Mobile businessman Timothy Meaher brought the last known ship filled with captured Africans into the United States. Some say he lost a $100,000 bet that he could do it without being caught.

Authorities were already on to Meaher and his co-conspirators by the time the Clotilda arrived in Mobile Bay. Under the cover of darkness, the crew and cargo – including the Africans – were smuggled up the Mobile River in smaller boats.  They landed on the river’s verdant banks, near land owned by the Meaher family, where Africatown sits today. Although Meaher lost his bet and was brought to trial, he was never convicted.

With few exceptions, the Africans remained in the area, kept as slaves by individuals who had invested financially in the "Clotilde’s" voyage. And then slavery ended - just five or so years after their arrival.

After slavery, the newly-freed Africans worked together to build a tight-knit community called Plateau or Africatown, which they designed and governed to feel like their African home. They built houses, cultivated the land, owned businesses and still retain many of their traditions and culture.

Woods remembers hearing her ancestors speak in their native tongue, and her grandmother made it a point to teach her their African ways and history, carefully telling and retelling stories before she even started school.

Her grandmother had grown up in Lewis Quarters, an Africatown neighborhood named for Woods’ great-great grandfather, who purchased the land from plantation owner Thomas Buford.

Once connected to a large and vibrant community, today Lewis Quarters is a physically isolated "island" surrounded by Gulf Lumber and other industry, railroad tracks and Interstate 165. There is only one way in or out of the community, a 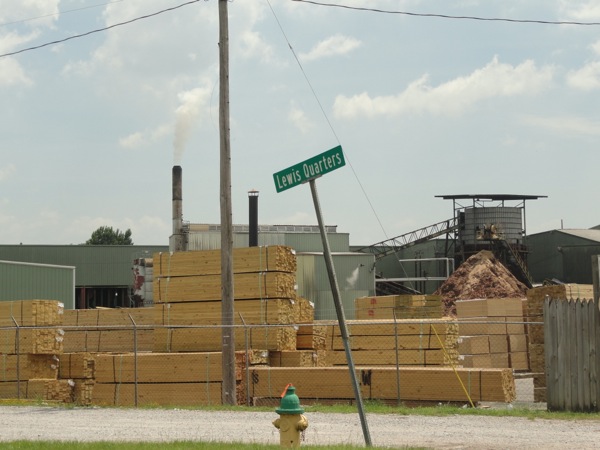 small lane that winds between Gulf Lumber’s mill and storage lot. The lane leads visitors up a slight hill and around a bend to a welcoming oasis of homes and greenery still owned and occupied by descendants of Cha-lee Lewis.

“They would just eat enough to stay alive, so they could buy land," Woods explains. “They found out if you owned land you could vote. Even back then, you could have a say so in your area. So Uncle Cudjoe and them worked for the Meahers and different people and they were able to buy the land and secure it for their children. That’s why we still have Lewis Quarters. They sectioned it off…and the children were each given a lot and told ‘Don’t ever sell this land, whatever you do.’ “

Africatown and the surrounding area was mostly a swampland back then, but the residents hunted, fished, raised livestock, planted fields and learned to live off the land.

Since then things have changed. What was once a Gulf Coast paradise and self-sufficient community has grown more and more industrialized. Paper mills owned by Scott and International opened in the 1940's, drawn to the area by it's proximity to the Mobile River and the Gulf of Mexico, as well as the low tax rates and low-wage labor.

Residents remember the mills with mixed emotions. They were a source of income and good jobs for many of the men in the area, and as a child, Woods remembers going to Christmas parties for the families of men who worked there.

Joe Womack, whose father moved to Africatown when he was 16 to look for work, describes the mills as a place to make a living, saying they would hire anybody who showed up and who was serious about working.

But soon residents began to notice changes. Woods, who is in her sixties, remembers fishing and crabbing in the river.

“When I was young, you could go up there, behind Scott Paper Company and, in about a couple of hours, you could have a tub full of fish and crabs.  But then it got so that you could stay all day and all you might catch is a couple crabs, and the fish wasn’t plentiful like they once were.”

Womack recalls the air pollution. “We used to see that stuff falling from the air – it looked like snow falling in the summer time, ate up a new car in two years if you didn’t wash it on a regular basis.”

Woods also remembers stuff falling from the sky and the horrible smells.

“Right here in Africatown on the main streets, we could smell the odor from International Paper Company.  It would be so bad you’d have to cover your mouth…I remember my grandmama would tell us to come in the house, it would smell like what you call ammonia now, it would be in the air so strong.”

She also remembers the trains that ran a few hundred feet away from her grandmother’s house in Lewis Quarters, “Sometimes those trains would leak and we would be playing in the Quarters and the smell from the trains would just about stifle you and you would have to go in the house.”

Residents of Lewis Quarters and Africatown are no strangers to the harmful effects of industrial invaders, but today they are under siege like never before.

Recently, Canadian National rail cars began carrying tar sand oil into Mobile and soon 120 car loads - totaling more than 2 million gallons every day -  are expected to transport the toxic sludge along those same tracks, just steps from the Lewis Quarter homes where Woods’ grandmother lived and where her brother and many family members live today.

According to its permit applications, ARC Terminals intends to build an off-loading facility just a little further south, near downtown Mobile. The proposed facility would use a controversial steam-heating process to convert the semi-solid tar sand sludge from the rail cars into a chemically liquified form. The toxic and corrosive material would then travel by pipeline under the Mobile River to storage tanks owned by ARC on nearby Blakely Island. 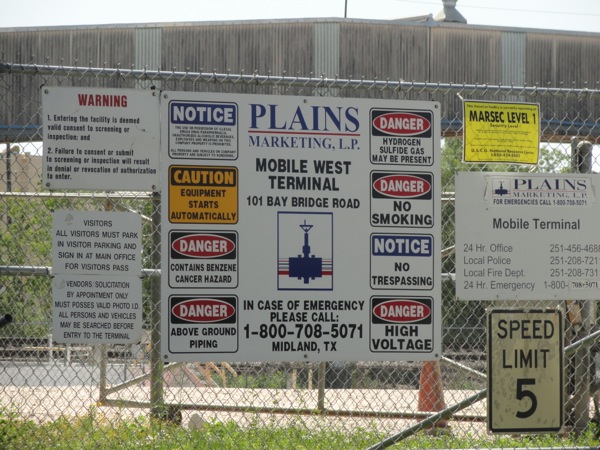 Residents and others fear that the tar sands would be shipped from the Blakely Island storage tanks through a more than thirty-year old pipeline that runs under Africatown, Prichard and other communities - and just behind Africatown’s Mobile Training School – to Plains' Ten Mile Terminal, then out to the Chevron refinery in Pascagoula, MS through a controversial Plains Southcap pipeline, currently under construction.

Plains Southcap was granted its federal permit by the US Army Corp of Engineers, which the Alabama Public Service Commission (AL-PSC) also approved, with virtually no public input.  The pipeline route runs through several wetlands and twice crosses the Escatawpa River after traveling through the watershed of Big Creek Lake, the Mobile area’s only source of drinking water.

Teresa Bettis, Executive Director of the Center for Fair Housing, says the danger to Africatown far outweighs any potential benefit.  “In 2012, the Africatown Historic District was recognized by the National Park Service and listed on the National Register of Historic Places. In spite of this recognition, Africatown is surrounded by industry and is already disproportionally impacted by the effects. To put corrosive, toxic tar sand oil, a substance rejected by communities across the country, in a thirty-plus year old pipeline under our homes, parks and schools only further overburdens this historic community, and it’s unacceptable.”

Womack and many other residents oppose tar sand oil being transported through their community, no matter what the method. "We grew up in Africatown with the paper mills, International Paper, Scott Paper, for fifty years. We're still burying 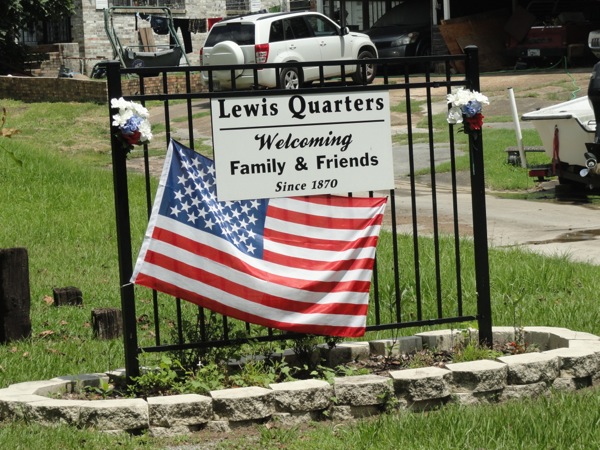 most of our people between the age of 40 and 50 right now. We don't want this hazardous stuff around Mobile, we want it stopped.”

Woods isn’t surprised by the lack of public input.  She says residents of Africatown are rarely consulted when new industry moves in. “The people in this neighborhood never know anything about it.  This is the way it’s been happening here for a long time, when we get the news it’s all done…and we never knew there was paperwork on it.”

About living in Africatown, she says,  “You know, you don’t just live here, this is your place. This is where your roots begin. You should love where you live, put all you have into where you live, and keep it up. Now when I walk through these different areas I can see older people from years ago.  I can almost picture them sitting on their porch saying to me ‘Be good now’. And we still love where we came from and we don’t want to see it destroyed.  We want our children and our grandchildren and those who come after them to know that we had pride and we tried to keep this little place."