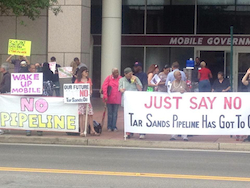 Area residents are calling on the City of Mobile to pass a resolution to protect the health, safety and economic well-being of local residents and natural resources by keeping tar sands oil out of the city. Tar sands oil, also referred to by industry as “bitumen” or “heavy crude,” must be diluted with highly toxic chemicals or heated in order to flow, and there's no proven way to clean in up effectively.

Photo: Area residents rally in front of Mobile City Hall this morning, in opposition to a new tar sands pipeline that is under contruction. Credit: Karen Savage

Teresa Bettis, Executive Director of the Center for Fair Housing, says the danger to the community far outweighs any potential benefit.  “Forty-seven people died a horrific death after the recent train derailment in Canada, many burned so badly they can’t even be identified or properly buried. A large part of their town, comparable to our entire downtown, was gutted – left utterly unrecognizable and uninhabitable. Mobile is much more densely populated.  With every train allowed to roll through here, the city is risking the lives of hundreds, if not thousands of its citizens.”

Africatown resident Robert Lewis, a descendent of the community's original settlers, is also worried about the tanks.  “The last big one [hurricane], Katrina, moved the Africatown bridge on one side…it was out for about 6 months. So what are we doing?  If we have a hurricane it’s going to mess those tanks up, it’s going to spill all over the city.”

Much of the toxic sludge will be stored in Arc Terminal tanks on Blakeley Island. Because tar sands oil is a thick, asphalt-like substance, trains will need to be unloaded using a steam heating process. Arc is hoping to build a facility to offload trains on a piece of property located at 56 Beauregard Street, near downtown Mobile. From there, the product would travel under the Mobile River to storage tanks on Blakeley Island.

According to David Underhill, with the Mobile Bay Sierra Club, the location of the tanks makes them especially vulnerable to catastrophic flooding. “The tank farms will store tens of millions of gallons of mostly Canadian tar sands oil, in amounts that far exceed the amount spilled by the Exxon Valdez [in 1989 in Alaska], which is still not cleaned up to this day. Now imagine a hurricane storm surge 25 to 30 feet high, coming up the river at these tanks holding several Exxon Valdezes worth of oil. These tanks are in the 100 year flood plain, which because of climate change is now more like an every five or ten year flood.” 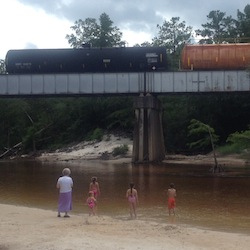 Residents are also concerned the toxic sludge will be shipped from the tanks through a more than thirty-year old existing pipeline under historic (and predominantly Black) Africatown, Prichard and nearby communities, to 10-mile Terminal, before being pushed to Chevron’s refinery in Pascagoula, Mississippi through a controversial Plains Southcap pipeline, currently under construction.

Africatown was the site of the last known shipment of slaves to the United States, in 1860, more than 50 years after the importation of slaves was outlawed. 32 of these West Africans founded the self-governed community of Africatown, where they preserved their native language and traditions well into the 20th century.

“In 2012, the Africatown Historic District was recognized by the National Park Service and listed on the National Register of Historic Places. In spite of this recognition, Africatown is surrounded by industry and is already disproportionally impacted by the effects. To put corrosive, toxic tar sand oil, a substance rejected by communities across the country, in a thirty-plus year old pipeline under our homes, parks and schools only further overburdens this historic community, and it’s unacceptable,” Bettis explained.

Plains Southcap was given a federal permit by the Army Corp of Engineers, which the Alabama Public Service Commission (AL-PSC) also approved, with virtually no public input.  As currently permitted, the pipeline will run from 10-Mile terminal, through the watershed of Big Creek Lake, Mobile's drinking water reservoir, to the Chevron Refinery in Pascagoula.

Officials with the Mobile Area Water and Sewer System (MAWSS) have not yet agreed to allow the pipeline to run through their property, and a study has been commissioned to determine what effects the pipeline could have on the water supply.  Although the study has not yet been completed, Jarrod White, attorney for Plains Southcap, announced at yesterday's water board meeting that Plains Southcap would proceed with a condemnation lawsuit on the property as early as this week.

White stated the pipeline was "not designed" to move tar sand oil, and the oil slated to run through the proposed pipeline would be Mayan and Arabian crude which will come from ocean-going vessels coming up the river, will be offloaded, piped to 10-mile terminal and then through the Plains Southcap pipeline.

Organizer Tom Hutchings sees the fight against tar sand oil as a life or death struggle. “No hazardous materials should be sent through our drinking water supply – none! Drinking water is something that deeply affects each and every one of us and is absolutely critical to all of us, to the future of the City of Mobile, to Mobile County and to the entire region."

Lewis said citizens rely on Big Creek Lake not only for drinking water, but for jobs. "MAWSS, if they don’t do something about protecting the water, they have no job. They can’t sell bad water.”  MAWSS website indicates they provide jobs for an average of 390 employees.

Mobile resident Myrt Jones is concerned about Plains Southcap's prior record of spills. “PSC's past record reads like a horror story with numerous Clean Water Act violations in states all over the country. EPA and the Justice Dept. announced Plains would have to spend to $41 million to upgrade over 10,000 miles of crude oil pipelines, along with paying 3.24 million dollars in civil penalties. These were settlement requirements having to do with Clean Water Act Violations in TX, LA, OK and KS. Let’s not add Alabama to the list!”

A pipeline rupture earlier this year in Jasper County, Mississippi was estimated to have spilled up to 122 barrels and cost more than $5 million to clean up (see video).

Hutchings reiterated, "We are urging the City of Mobile to adopt this resolution. This is a life or death struggle for our water, for our lives. We are united and we will not back down!”