The Easy Death of Human Beings 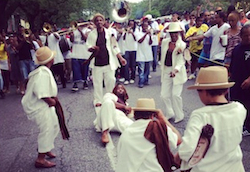 The shooting that maimed twenty people on Mother’s Day in New Orleans has been classified as “strictly an act of street violence” by the FBI. This hurts my heart. Calling the violence inflicted upon our lives “street violence” disregards the precious value we hold as human beings. When violence takes place in a working-class neighborhood or community of color, by a member of that community, it is called street violence. The treatment the community receives is vastly different than when it is classified as a mass shooting or act of terrorism.

Who am I and where am I coming from? I am a sister of a homicide victim, who’s stolen life was classified as street violence. I’ve helped to bury young bodies, raise money for surviving families, stayed up many long nights, lighting candles, cooking, rubbing backs and holding space for grief to come out in gut-wrenching wails from the deepest hollows of lungs. I’ve supported a few through the trenches of court proceedings and felt the agony of having to just sit in the devastation and pray to come out the other end alive.

This piece comes from a place of love, empathy and respect for all survivors and victims of violence.

What gets defined as terrorism? As a mass shooting? As street violence? Those of us impacted by “street violence” often use the term as short hand. It’s our code to witness for each other how our communities experience oppression. We know what happens to your soul and your heart from being stuck with sub-standard schools and housing, poverty, the war on drugs, high rates of incarceration and lack of resources for grief counseling, substance abuse and general mental health. Street violence happens in the wake of state-sanctioned violence* on people surviving in underground economies created by capitalism.

When outsiders in the media, police and courts classify a violent incident as "street violence," it is code for "criminal," for troublemakers; for people who are used to violence, desensitized to it and able to cope with little-to-no space to process grief, fear, anger and pain. These outsiders are so wrong.

Words like “strong” and “resilient” are codes that people internalize as badges of honor to wear with high chins and puffed chests. Even though the weight of those badges help lead to higher rates of depression, high blood pressure, heart disease, substance abuse, dreams interrupted, goals unrealized, retaliation and suicide. And let’s be careful when we highlight and celebrate those who do accomplish greatness in spite of severe hardships, to not ignore the masses of people whose potential gets chopped down instead.

The phrase “whatever doesn’t kill you makes you stronger” is something we say to amp ourselves up to survive adversity. But really the phrase is only partially true. Most people struggling with drug addiction, with abuse, with harmful and dangerous lifestyles have been through the ringer. Most people who live like this may be stronger and more resilient as a result of their hardships, but it is just as real that survival has untold costs for even the most resilient spirit.

We must always remember that any person – no matter how accomplished, how strong, how well loved – has the human potential to be as hurt, lost, vicious and broken as those we consider to be low-down, evil monsters. None of us is better than anyone else. And none of us can know for sure what we would do if our life was made up of the same experiences and circumstances as someone else’s.

No matter how monstrous we might feel the act of shooting into a crowd on Mother’s Day is – it is never in fact a monster that shoots into a crowd on Mother’s Days, tearing through the bodies of twenty people. Love demands that we know they are a fellow human being. To name them as a monster requires that the community forfeit its humanity. Only when we remember the shooter is a person – one of us – are we able to hold them accountable. Only then do they have the opportunity to make any restoration for the harm.

What is the cost to humanity when we struggle to survive the unrelenting assault of state-sanctioned violence? The price is paid by us – We who come from a place where the taking of lives is called street violence. We who don’t have the resources offered to people in wealthier, whiter communities when violence strikes. We who are assumed to be strong enough to persevere through whatever oppressive circumstances are inflicted on us. We who have developed the callousness to potentially steal the breath from many innocent people.

The weight of these survival scars, without resources and support to help heal them, may very well have helped lead one of us to being so disconnected from the miracle of sharing life with family and friends, that we could shoot into a crowd of precious human beings. And when one of us did, it was again called street violence.

What happened on Mother’s Day in the 7th ward has been called street violence committed by a monster that has been “hunted.” He is nineteen years old. Thinking of the ones who inflict violence on those we love as monsters is understandable. Wanting revenge is real. But this framing obscures the depth of the tragedy and more easily dismisses the cost to our collective humanity. We are seeing the backbreaking, soul-crushing, unrelenting impact of surviving on the ass-kicked end of 21st century oppression. We must tell more of the story; not only how it ends. Our collective humanity depends on it.

They say this “type” of violence is to be expected, it’s not shocking the way a mass shooting or act of terrorism is. Bull! The issue isn’t simply about the word we choose to categorize what kind of violence happened, but the actions that the word results in. The community affected by the violence gets treated differently, depending on which word is used to describe it.

The Boston Marathon bombing, an act of "terrorism," killed three and injured more than 260 people. The Sandy Hook Elementary school shooting, a "mass shooting" left 28 dead, 20 of them children. The “mass shooting” in Aurora, Colorado last July, at a screening of The Dark Knight Rises, killed twelve and injured 58.  These national tragedies were indeed tragic. There is no doubt. And thankfully, the Mother’s Day shooting in New Orleans did not claim any lives. But it is no less tragic when thousands of people are murdered annually in communities across the country that are impacted by racial and class oppression. In New Orleans alone, 193 people were murdered last year, 10 times the national average, and 58 have been murdered so far this year (according to NOPD statistics). These murders were overwhelmingly considered acts of “street violence.”

Will millions of dollars be raised to help cover burial and medical expenses, lost wages, and other financial losses to families affected by “street violence”, as it was after the “terrorism violence” of the marathon bombing? No. Most likely, the victim’s families and communities will hold fundraisers themselves. Will the families affected by “street violence” receive in-depth time and space to heal, like the victim’s families from the “mass shooting” at Sandy Hook Elementary School? No. Most likely, any support will be coordinated by people from within the community, who themselves are traumatized and who often have less resources available to them. Will the value of the victims of “street violence” lives equate the value assigned to the victims in the Aurora movie theater “mass shooting?” No. The general public will perceive the victims of the Mother’s Day shooting and the thousands of other victims of street violence throughout urban America each year as predictable casualties. The easy death of human beings assigned a lesser value by society because they are poor and/or people of color.

The easy death of human beings.

* The naming of oppression against marginalized people as state-sanctioned violence comes from the work of the Women's Health and Justice Initiative, an affilitate of INCITE! Women of Color Against Violence.

The definition of Shana Turner’s womanhood came from the influence of her mother and her mother’s close friends; a mix of straight and gay, multi-racial, working-class, street-smart, radical feminist/womanist community activists. They were warm and rough women, who laughed loud, cussed often and taught Shana to challenge authority when it harmed people. Growing up in Boston’s inner city, she was also influenced by grassroots, hip hop activism and art. Shana’s vision is to weave drama and creative writing into spaces of popular education, healing and organizing. Although she will forever be a proud East Coast Girl, she left the frigid winters and breakneck pace of the north for the sunshine and kindness of the South. For the past six years, Shana has lived in New Orleans and is growing roots with her partner Nikki.