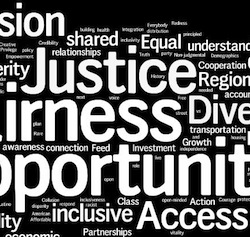 Originally posted on the Alliance Institute blog. On Sunday following the Trayvon Martin verdict, as part of a Facebook thread (started by me), I posted the following quote, paraphrasing Frederick Douglass (be warned – this is a major paraphrase!), “Power concedes nothing without struggle and once the vigilance of struggle subsides, will seek to re-impose the comforts it once enjoyed.”

There are two reasons I ventured from the oft quoted Douglass, 1) Power concedes nothing without a struggle, a demand won’t do, never did, never will; and 2) Power, as used here, knows  what it has given up, never wanted to give it up, and will at every opportunity seek to re-establish itself. And this is essentially what justice is about.

Although justice is often used as a noun, it is actually a verb. Justice is a never ending active force responsible for maintaining an equilibrium, a balance. In nature we see that when the natural balance/equilibrium is disturbed, such as when a predator overfeeds, the resultant lack of food thins out the number of predators until balance is achieved. In extreme cases, such as when a species is wiped out or a new one introduced, a new balance is struck. This is the work of justice. It is no less in the lives of people.

In the lives of people (and by that I mean as societies, not individuals) justice serves to distribute power in such a manner that the benefit of the whole is not jeopardized by desires of the few; or to protect minority from the tyranny of the majority (as so eloquently phrased by James Adams, POTUS #2 & Founding Father).  This is why you have throughout history the uprising of the poor and downtrodden towards increasingly more just (see what I did right there?) societies. This process is on-going and never-ending, for there will always be those that seek personal benefit at the expense of the whole, and those who will continually fight against those desires.

Primarily for this reason, even though I am close to 20 years in the work, I do not tire of social justice. I am aware that I am part of a legacy that extends to the beginnings of mankind and that will continue until we cease to exist as a species. It is for this reason also that I was not surprised, shocked, dismayed, or otherwise personally impacted by the not guilty verdict for Trayvon Martin’s murderer; for I am crystal clear that Power concedes nothing without a struggle, a fight; and that Mr. Martin’s murderer represents that Power in these United States. I am also clear that the African-American community has not fought much nor maintained a vigilant struggle against the Power which conceded the ability to overtly treat it as second-class since the time of the Civil Rights Act.

The Trayvon Martin case, the school-to-prison pipeline, the pro-gun & anti-abortion legislation are all a part of what happens when vigilance subsides. They are all examples of Power re-establishing itself.

Stephen Bradberry is the Founder and Executive Director at Alliance Institute in New Orleans, LA. A veteran organizer and advisor to the Gulf Coast Fund, Bradberry is the only American individual to receive the Robert F. Kennedy Human Rights Award. Noted for assuring a space for the community's voice, Bradberry's work has resulted in billions of dollars being directed to the Gulf Coast since Hurricane Katrina in 2005. The Alliance Institute is a proposed sub-grantee for the health services portion of the BP settlement.