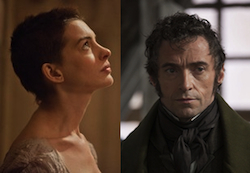 The Academy celebrated Les Miserables stars Hugh Jackman (nominated for his role of Jean Valjean) and Anne Hathaway (winner of Best Supporting Actress for playing Fantine) last night for their depictions of a Formerly Incarcerated Person and a sex worker. As someone who works with Formerly Incarcerated Persons at Voice Of The Ex-offender, I got to thinking – What would a Les Miserables set in 2013 look like? There are 2.3 million Americans in prison today, and 65 million Jean Valjeans in the United States – people who have convictions or arrests in their past, and continue to face the consequences. An estimated 30% of the U.S. adult population has a criminal record on file with a state.   So who would Jean Valjean be today?

There are literally millions of real-life Jean Valjeans in our midst – people suffering a punishment that does not fit the crime and who are living with the stigma of incarceration years after they have completed their sentences.

Just one Gulf Coast example is the Scott sisters, two African American women who were given life sentences for allegedly stealing $11 in Mississippi. While the two sisters’ sentences were suspended and they were released in 2011, they are required to be on parole for the rest of their lives.

We’re not as removed from the injustices and inhumanity faced by The Miserables Ones as we might wish. And to what end? This system has little resemblance to justice. And it certainly doesn’t reduce crime or violence  – Despite the fact that the United States spends over $51 Billion annually and arrested 1.7 million people for non-violent drug offenses in 2009 (more than half of which were for marijuana possession), people continue to buy, and sell and use drugs, now at higher rates than when the war on drugs began.

Les Miserables made American audiences fall in love with a criminal and a sex worker, and showed the inhumanity of a “justice” system driven by punishment – by using Hollywood paragons of whiteness to tell the story. Audiences clearly see the crimes of Hugh Jackman’s Valjean and Anne Hathaway’s Fantine as understandable, if not downright noble, survival tactics each was driven to out of poverty and injustice. But will we, as a society, extend that same love and understanding to the millions of “criminals” amongst us – especially when they are Black and Brown people that our nation has treated as inhuman and unlovable from its birth? Are we prepared to turn a critical eye on our own “justice” system, and see that its core function is maintaining white supremacy rather than reducing violence?

While the United States is filled with Valjeans and Fantines, we’re also filled with Inspector Javerts – people of good conscience, who value law, order and morality, but who cause persecution through our misguided sense of justice and twisted view of our fellow humans. When, at the end of Les Miserables, Javert is confronted with the criminal Valjean’s enduring goodness, and the limitations of the Inspector’s own sense of justice, the contradiction drives him to suicide. But it is my hope that the Javerts among us in the United States can choose a less destructive path when confronted with our own contradictions – that collectively we can transform our understanding of justice, and the criminal justice system to serve a vision of humanity, non-violence, wholeness (individual and collective), and reconciliation.

Written with Ada McMahon.
----------
Rosana Cruz is Associate Director of VOTE (Voice Of The Ex-offender). Previously Rosana worked with Safe Streets/Strong Communities and the National Immigration Law Center. Prior to joining NILC, she worked with SEIU1991 in Miami, after having been displaced from New Orleans by Katrina. Before the storm, Rosana worked for a diverse range of community organizations, including the Latin American Library, Hispanic Apostolate, the Lesbian and Gay Community Center of New Orleans, and People's Youth Freedom School. Rosana came to New Orleans through her work with the Southern Regional Office of Amnesty International in Atlanta.