An American Nightmare: The Wedgewood Community 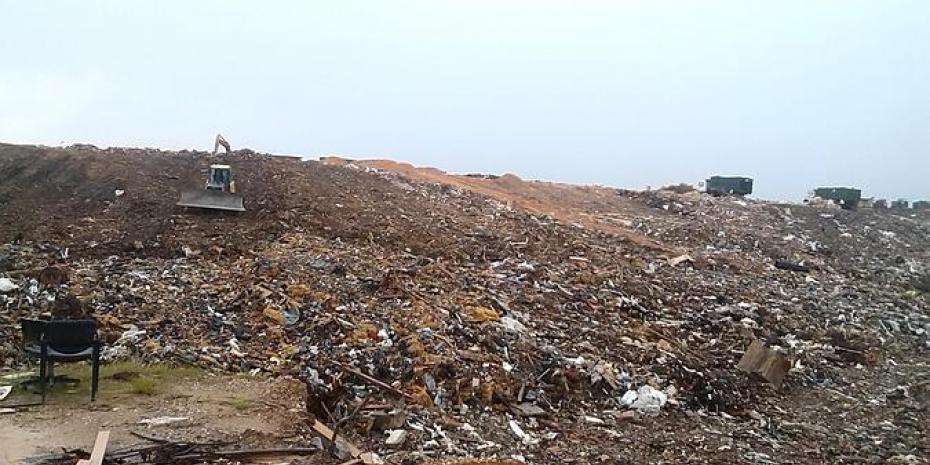 We’re standing in the parking lot of the Marie K. Young Community Center in the Wedgewood community of Pensacola, a quiet African-American neighborhood where most residents own their own homes, many of which are generational, passed down from their parents, who bought them in the late 1950’s or 60’s.

Judy Cook, a retired teacher and community resident, turns slightly. “On that street,” she says, pointing to the left, “all but three houses have someone taking chemotherapy."

She sighs and takes a deep breath, “And now my daughter has a tumor on her brain. She’s only forty-two. My son already died of lung cancer.”

She sighs again. “He didn’t smoke.”

“The pit” that Cook refers to is the Rolling Hills landfill. Wedgewood and it’s two hundred and seventy or so homes are surrounded by at least six additional sites, Construction and Demolition (C&D) disposal facilities, and borrow pits.

What Cook describes is nothing short of a nightmare.

Photo: One of seven landfill facilities near the Pensacola, Florida, community of Wedgewood. By Karen Savage.

VIDEO: LaFanette Soles-Woods pleas for help on behalf of her community.

Residents say it’s anything goes when it comes to what’s allowed in the pits, some of which are far closer to homes than legally permissible. At times the trucks run at all hours of the day and night, and even when the trucks aren’t rumbling down tiny neighborhood streets, the sounds of bulldozers can always be heard, their tell-tale dust clouds rising into the air, eventually settling over the neighborhood.

“As much death as they can get in these holes, they’ll get it in there,” said Cook emphatically.

After the 2010 BP Disaster, residents say boom, tarballs, tarmats and other oil waste was trucked into the nearby Longleaf facility, operated by Waste Management. Records show the facility was only permitted as a temporary storage site, meaning debris was only allowed to stay for 24 hours before being moved, in most instances to the Springhill Regional Landfill.

Neighbors, however, aren’t convinced. They report dumpsters sitting uncovered for days, and harsh headache-causing odors emanating from the facility. Many worry for worker safety and are surprised OSHA hasn’t been involved.

Longleaf has a history of complaints and Myra Lightner, whose house sits only a few feet from the facility, says she was forced to abandon her home, which is now for sale.

Additionally, on April 29th and 30th, after a flash-flood of at least 22 inches of rain occurred, the C & D landfill's berm exploded, allowing toxic water to flow through houses, on through Marcus Creek, to Crescent Lake and out to Pensacola Bay. To this day, several folks remain unable to return to their homes.

VIDEO: Wedgewood resident, Aaron Wiley, discusses life in the community before and after.

Long-time resident Aaron Wiley says the neighborhood wasn’t always this way. Wedgewood started out as the American dream. “When we moved out here in 1958, this whole area was oak trees and pine trees…it was a middle-class Black community.”

He says many residents were veterans, hard-working, who were looking for a good place to raise their families. Some started small farms, raising goats and chickens, planting gardens and sustaining their families and neighbors with good, healthy food.

“Make that seven and a half,” interjects organizer and researcher Dr. Gloria Horning, only half joking. “They’ve just given one more a permit to open.”

Horning has been organizing since May, having spent countless hours researching and working to keep the community’s needs and the egregious actions of the area landfills in the media - “keeping the fires burning,” as she describes it.

Horning is disgusted by the disparities, explaining that it costs companies far less to dump in the Wedgewood community than it does anywhere else, and describes the lack of air monitoring and liners in the facilities as blatant environmental racism.

She credits good old-fashioned legwork and community organizing for getting the plight of Wedgewood residents some much-needed recent attention.

VIDEO: Dr. Gloria Horning talks with LSP about organizing in the Wedgewood community.

Earlier this year Cook, who was recently hospitalized from an unexplained infection and suffers from other health issues, quickly emerged as chairperson of group, making sure folks got to meetings and spreading the word.

Wiley, who’s lost two brothers to renal failure and one to cancer, pitched in, and neighbor LaFanette Soles–Woods, a breast cancer survivor herself, also stepped up.

What started out as a few sparsely attended community meetings quickly grew into standing room-only events. Residents who for years had complained about a range of diagnosed and undiagnosed illnesses came out in droves.

Their stories included a common thread - repeatedly being prescribed antibiotics, misdiagnosis, unidentified ailments and lingering and often chronic, even fatal, illnesses. They wondered if the soil in their gardens and the water they drank was contaminated.

Convincing the media and local officials to come for a tour to see – and smell – for themselves was a turning point. Those who attended included Escambia County Administrator Jack Brown, Florida Department of Environmental Protection Northwest District Director Shawn Hamilton, Escambia County Solid Waste Operations Manager Pat Johnson, members of the media and local residents.

Wiley and Cook said many officials were physically affected by the fumes. Shortly after the July 22nd tour ended, a health alert was issued due to elevated levels of hydrogen sulfide near the Rolling Hills facility. A summer camp being held in the community center had to be relocated.

The alert was in effect until early August and although it has been rescinded, officials are taking a closer look at the nearby facilities. On July 31st, the Florida Department of Environmental Protection (DEP) issued a notice of revocation to South Palafax LLC, operators of the Rolling Hills facility, rescinding their permit and charging the facility with violating numerous environmental standards.

Although Rolling Hills is fighting the revocation – and is still operating during the appeal process - residents are cautiously optimistic. On August 21st, the Escambia County Commissioners approved a six-month moratorium on new borrow pits.

But community optimism is steeped in reality. They know it took years to create this mess and it will take continued citizen participation, strong political will, and time to even begin to clean up their community. They explain that without long-term regulatory changes to keep landfills and borrow pits out of communities in Pensacola, across the Gulf Coast, and beyond, absolutely nothing will change.

That’s what worries Wiley, “They’re giving this industry a license to commit genocide. Slow genocide. When you put profit over human lives, something is wrong with this picture.”

VIDEO: Learn more about the community of Wedgewood by watching the video above.