No Más Tar Sands! – Healing Begins at the Source 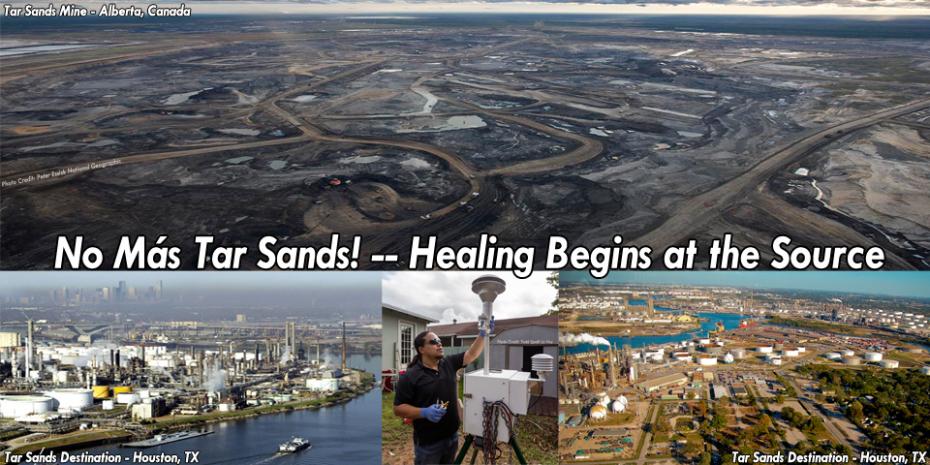 A version of this blog was originally posted on Common Dreams.

The Keystone XL pipeline begins in Alberta, Canada and ends in my backyard.

Here in Houston’s East End, we’re well acquainted with the risks of living so close to the oil refineries whose toxic emissions poison us every day. Like so many other kids in this neighborhood, I grew up with constant headaches, asthma and skin rashes. Cardiovascular diseases and cancer are not uncommon.

Now, the tar sands are here in my home. Today the dirtiest, most toxic oil on the planet is being pumped into our communities via the southern segment of the Keystone XL pipeline -- and our families are being forced to breath the additional pollution. Just last week, one of the first shipments of refined tar sands was exported to Europe via nearby Freeport, TX. This serves as a terrible precedent and reminds us that despite wide opposition to the Keystone XL pipeline, tar sands is making its way through our communities along the Gulf Coast and across the Atlantic ocean.

Growing up in a city built almost entirely from oil and gas revenues, it is difficult to understand or even discuss the negative impacts that 40 plus miles of refineries, chemical plants and other subsidiary industries have on nearby communities. Our homes have become living examples of environmental racism in which low-income communities of color are bearing the disproportionate burden of petrochemical pollution. It wasn’t until I left for college and returned to teach at a local elementary school that I began to see how different Houston’s East End is from other parts of the country.

At the same time, I also began to realize that we in Houston are not alone. Everywhere tar sands is mined, transported or refined, there’s a community that’s suffering the health consequences of living so near the world’s dirtiest oil.

Healing from toxic pollution begins with getting to the source of the destruction impacting our lives.

From these communities, there’s a growing network of leaders who are fighting tar sands and other forms of dirty energy wherever they arise. As the rest of the country debates the merits of the northern segment of the Keystone XL pipeline, the Gulf Coast is slated to be the main recipient of much of this toxic stuff -- so frontline communities are mobilizing for our survival.

Which is why, at the end of this month, frontline leaders from the Gulf Coast are making our first trip to tar sands ground zero in solidarity with communities everywhere that face the same threats. On June 27, I—along with other t.e.j.a.s representatives, and four others from tar sands-affected communities along the Gulf Coast—have been invited to join the fifth and final Healing Walk through the epicenter of tar sands devastation in Alberta. It’s a peaceful pilgrimage led by indigenous elders. It’s a time for frontline leaders to meet, share skills and experiences, and strengthen the ties between us.

Our team of leaders representing the Gulf Coast will include:

Stopping tar sands exploitation starts with connecting frontline leaders at both ends of the pipeline. It’s important for Gulf Coast communities breathing pollution at the “tailpipe” to connect and strategize with impacted indigenous leaders near the mining sites so we can build a continental movement strong enough to stop tar sands once and for all.

Frontline communities are leading the fight for environmental justice and carry with them the experience, expertise and knowledge that can bring about change. From the Gulf and the Pacific Coast to the Lakota in the Black Hills of South Dakota, to the Cree and Dene who have lived in the boreal forests of Alberta for thousands of years, together we are the greatest threat to the tar sands industry.

This spiritual march through the heart of the tar sands mines will be a powerful chance to raise awareness of the most destructive industrial project on the continent and to connect the struggles of all who oppose it.

Find out how you can support the Healing Walk and get involved.