Railroaded! A Tale of Two Communities 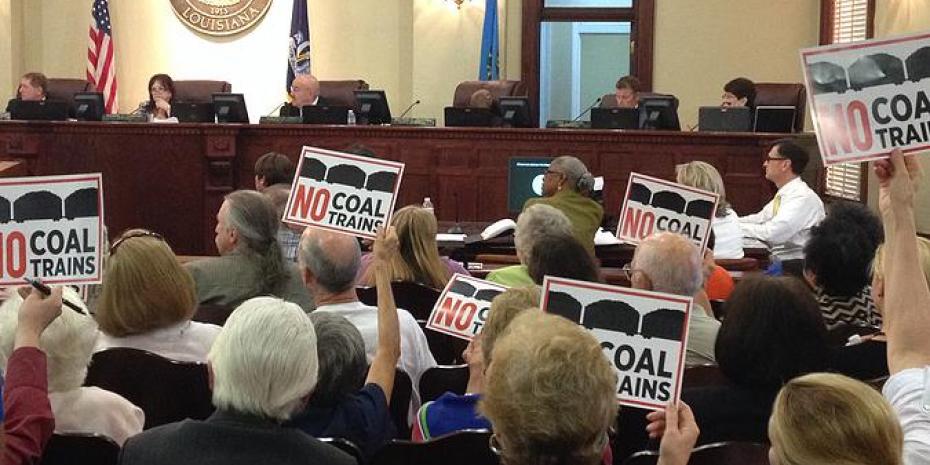 “What is being proposed is dumping a problem from one neighborhood to another without actually solving the issue,” explains Graham Bosworth.

Bosworth, who grew up in the Hollygrove Dixon neighborhood of New Orleans and is now Chair of the Mid-City Neighborhood Association, refers to a proposal to move and expand hazardous rail traffic out of Old Metarie and into his New Orleans community, but some say his statement rings true across Louisiana and the Gulf Coast.

While other areas of the country are rejecting coal export terminals and tar sands, Louisiana and the Gulf Coast are boasting record levels of petrochemical and industrial development. Yet, as much as many economic officials and politicians welcome the boom, residents are taking a closer look at how that development will affect the quality of life in their communities.

For example, residents in two Louisiana communities are opposing plans to extend, relocate or increase rail traffic into and through their neighborhoods, and are voicing their opposition to local, state and federal officials.

In Gretna, residents fear that a proposed RAM Terminal's coal and petroleum coke export facility near Ironton would not only result in more pollution and harm to human health and the environment near the facility, but would also mean uncovered coal trains up to a mile long running on the New Orleans and Gulf Coast Railway (NOGC).

The NOGC currently runs from Algiers to Belle Chasse, including a stretch that runs down the middle of 4th Avenue in Gretna. According to Devin Martin, with the Sierra Club Delta Chapter of Louisiana, the railroad currently services the Chevon Oronite plant in Lower Belle Chasse with short trains carrying mostly hazardous chemicals, and a grain elevator, which uses longer trains that often block the more than 200 crossings, many of which run across residential driveways. The coal trains would be a similar length.

If built, the controversial facility would be located just north of Ironton, a historic African American community, and on the same property as a $300 million sediment diversion project that is part of the 2012 Coastal Master Plan. The Louisiana Department of Natural Resources (LDNR) granted RAM Terminals a coastal use permit in October 2013. RAM Terminals is still seeking final approval from the Army Corps of Engineers.

A lawsuit filed late in 2013 by residents Joyce Corning and Velma Davis, along with the Sierra Club Delta Chapter, Gulf Restoration Network (GRN), and Louisiana Environmental Action Network (LEAN), alleges that the LDNR failed to adequately address several concerns, including failure to address environmental impacts, failure to discuss alternative locations, and failure to ensure consistency with the state’s master plan.

Council members claim the railroad company is in favor of relocating the track, a proposal that’s been on the table for a number of years. But residents were skeptical, citing the railroad’s long history of delayed maintenance on the existing tracks. Possible relocation is at least five years away.

During a contentious public comment session that lasted nearly two hours, multiple residents spoke out against the increased train traffic and against the proposed terminal altogether.

One resident summed it up, “We don’t want it here, Harvey don’t want it there I don’t think Louisiana ought to want it at all….maybe there’s something in the resolution that could be added to make other communities should come together and say the same thing.”

In the end, the Council was met with 'boos' when they unanimously voted to approve a resolution that supported moving the track out of Gretna, but did not oppose the terminal itself. 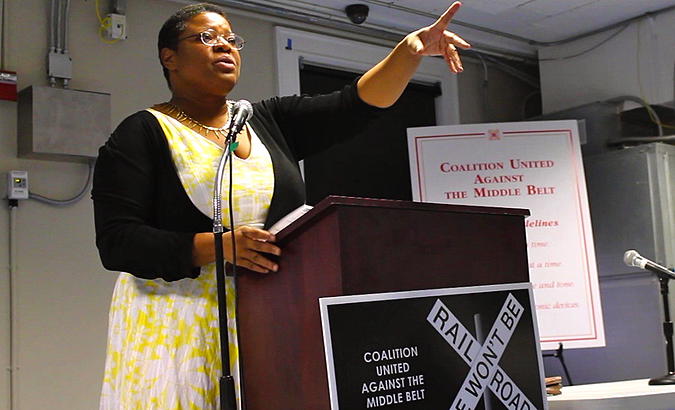 PHOTO: Monique Hardin with Advocates for Environmental Human Rights explains the permitting process during an informational meeting called by the Coalition United Against the Middle Belt.

Just a few days after the Gretna meeting, the Coalition United Against the Middle Belt held an informational meeting in New Orleans to update residents on yet another railroad proposal. This proposal, developed by the Union Pacific, Burlington Northern Santa Fay Railway (BNSF), Canadian National (CN), Kansas City Southern Railway (KCS), Nortfolk Southern Railroad (NNS), CSX and others, would reroute rail traffic out of Old Metarie and into the Hollygrove, Dixon, Palm Air and Mid-City communities. This option, known as the “middle belt” option, has been proposed several times in recent years.

It was the disparity between the neighborhoods and the plan to take the railroad out of Old Metarie, a predominately White neighborhood, and push it into more diverse, lower income New Orleans neighborhoods that prompted organizer Debra Voelker to get involved.

Voelker, whose neighborhood will be impacted if the plan goes ahead, says she only recently heard about the plan and began to organize against it. She sees this proposal as no different than too many other post-Katrina development plans that resulted in minority and low-income residents being dumped on by industry or pushed out of the city entirely.

“Developers and federal agencies, with the help of some local politicians, have taken our city…this most recent plan was hatched in 2006, when our neighborhoods were still devastated. And so that’s what we need to be talking about – that nine years later the vibrations are still being felt in our communities.”

During the meeting, Monique Harden, a human rights and environmental lawyer with Advocates for Environmental Human Rights (AEHR), led the crowd through an explanation of the National Environmental Protection Act (NEPA), which requires the Federal Railroad Administration prepare an Environmental Impact Statement (EIS) before the proposal can be approved.

An EIS is required to state the purpose of the project, an evaluation of alternate ways to achieve that purpose, a discussion of compliance with all applicable laws, and an analysis of the full range of effects on the human environment.

When she asked if anyone in the room had attended scoping meetings held in February of 2012, a required part of the EIS, only one person raised their hand. Several individuals said they would have gone, had they been notified. Others expressed dismay that the meetings were held more than two years ago.

Harden said some who did attend the scoping meetings weren’t aware the meetings were scoping meetings - which are required to define issues to be addressed in the EIS – and were never told what the goals and purposes of those meetings were. That, she explained, raises a real concern “about the ways in which this project has really short-changed that public participatory process from the outset, and not given people the real opportunity to understand what was going on…and how they can impact it.”

As a result, she explained, the EIS may not adequately address community concerns. Currently a disagreement between State and the Federal officials on how to deal with alternative projects and how they would affect the community’s quality of life is preventing the EIS from being completed, and as a result, the EIS is not expected until later this year or the Spring of 2015. 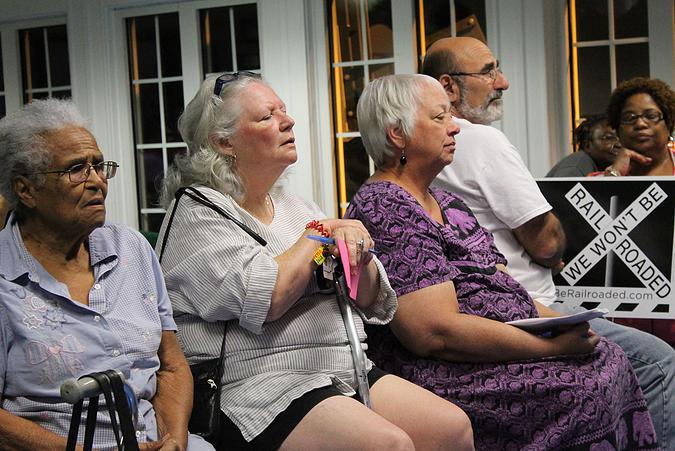 PHOTO: Community members listen to information presented during the meeting.

Local resident and mother Bridgette Medley voiced her concern about potential health impacts to those who use St. Patrick’s park near her home, and she worries about an accident. She has good reason to worry.

“When I lived on Florida Avenue we lived through a train explosion, I know the devastation that can happen...We were displaced for days. Now my mom has stage-4 breast cancer, my father died of lung cancer, my brother has cancer, and my niece has some type of muscle disease. I can’t say that it is because of the train or the explosion, but I can’t rule it out either…the health effects are what I’m concerned about…I lived through that already. I don’t want to have to live through that again.”

The 1987 disaster caused Medley and thousands more to be exposed to butadiene (a cancer-causing chemical used to make carpet backing and other synthetic rubber) and eventually evacuated from their homes when a leaking tank car at a CSX rail yard in New Orleans exploded in the middle of the night. Firefighters were forced to let the hazardous material burn out, rather than risk exposure while extinguishing the flames. The fire burned for more than a day, closed sections of I-10 and I-610 and forced nine schools to cancel classes.

“We may live in different communities, but you notice there are no walls separating us, the same air flows from one community to another,” added Lonnie Hewitt, a member of the Palm Air Civic Association.

Residents in New Orleans have many unanswered questions: Which hazardous materials could soon be running through their backyards? Would the trains carry highly explosive Bakken crude oil? What would prevent uncovered coal cars from running through their neighborhoods, covering their homes in toxic dust?

Gretna, Mobile, Houston and other Gulf Coast residents wonder why coal, oil and other toxic materials continue to be dumped in their neighborhoods when other parts of the country are rejecting such plans.

While the Northern leg of the Keystone XL Pipeline is held up due to strong opposition, the Gulf Coast leg – which faced similarly strong resistance from residents – is already built and running through the backyards of residents in Oklahoma and Texas.

In spite of strong citizen opposition, Plains Southcap was allowed to put an oil pipeline through the watershed of the Mobile-area’s only source of drinking water.

On the northern edge of Mobile, the historic Africatown community, founded by the last enslaved Africans brought to the U.S., is under siege by tar sands and the oil industry, with a pipeline running just feet from it’s historic school and a tank farm proposed just across the street. Trains carrying bitumen and Bakken Crude rumble through rural Alabama, across rickety bridges and through unsuspecting communities. 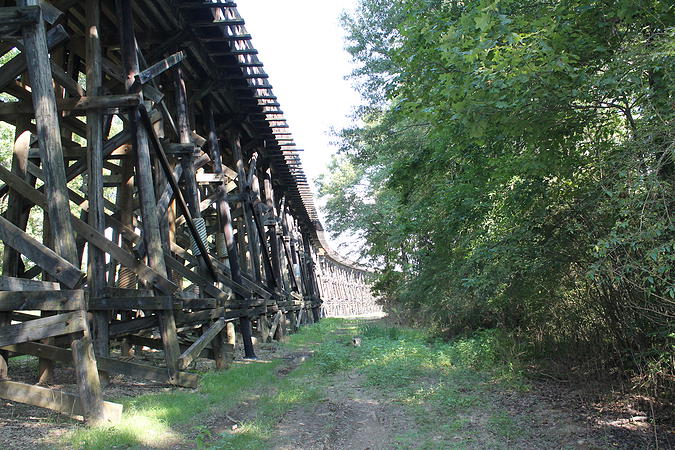 As one Gretna resident wondered, “Is it really all about the dollar and the money? Are we really that expendable? Why else would coal be shipped from way out west all the way to the tip of Louisiana and then sent overseas?”