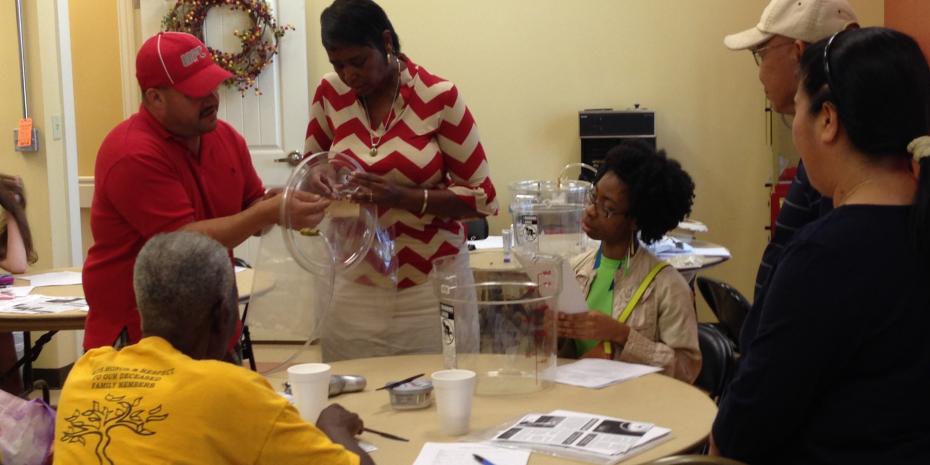 I am a community organizer with Steps Coalition, a grass roots social justice organization in Biloxi, Mississippi.  In 2014, we were invited by a group of residents living in the Cherokee subdivision to help support their organizing efforts to reduce their exposure to industrial pollution.  The subdivision is located near Bayou Casotte Industrial Complex in Pascagoula, which houses the largest Chevron refinery in the world, two sandblasting and paint operations, two chemical plants, and a BP processing plant and gas exporting facility.

The closest facility is about 500 feet away from a couple of houses in the neighborhood.  Dust particles containing toxic levels of metals often make their way to the residents' homes, landing on their cars, houses, seeping inside their houses and likely into their lungs.  In addition, nearly every day residents complain of moderate to strong odors that often have immediate health impacts, such as burning eyes, throats, nausea, headaches, vomiting, dizziness and numbing of the lips and hands.

Many say they are experiencing long-term health impacts, such as respiratory problems, chronic colds, chemical dermatitis, sinus, weightloss, sleeplessness, anxiety and neurological disorders.  Of the 130 households in the subdivision (a few of which are empty), there have been 30 reported cases of cancer with seven active cases located within blocks of each other.

The odors sometimes last for just a few minutes and other times keep them imprisoned in their homes for a week.

During Christmas last year (2015), residents reported being stuck inside all week because the odors were so strong "they would knock you out."  They feel trapped.  Some have been told by their doctors to move out of the neighborhood, but for many, this is not possible.

Mrs. Tran explains, "my home is not a box. I cannot just pick it up and move."

In the last year the Cherokee Concerned Citizens have met with the Mississippi Department of Environmental Quality (MDEQ), the Environmental Protection Agency (EPA), every large industrial facility, the Mississippi Department of Health, the Pascagoula City Council, the Jackson County Board of Supervisors, Mississippi Emergency Management Agency (MEMA) and the Local Emergency Planning Commission. They feel that talking to these groups is getting them nowhere.

For the residents, it is frustrating that they don't know what it is they are breathing and can't point to the industry that is making them sick. In September of 2015, Steps Coalition partnered with Community Science Center to train residents to take their own air samples so that they can find out for themselves.  Fifteen residents were trained and so far six samples have been taken.  Four of the samples came back with toxic levels of metals found in the particulate matter that blows into the neighborhood.  More samples need to be taken to be able to identify all that they are experiencing.

Mrs. Weckesser, president of Cherokee Concerned Citizens, said the neighborhood was here first and industry has continued to expand over the years, making living near them more and more unbearable.  She says her house has lost its value and she cannot knowingly rent out her home to another family because she knows she will be exposing them to the toxic pollution.