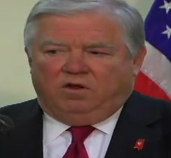 By P Anne Battiste, crossposted from The Gazette (At South Mississippi). Mississippi’s Governor and 2012 GOP Presidential Candidate, Haley Barbour, finds himself once again in the hot bed of racial controversy.  Politico’s Kaise Hunt 2/15/11 post at 6:43 PM EST (Updated: 2/15/11 10:29 PM EST) revealed, “In the latest racially charged incident in his home state, Haley Barbour on Tuesday [February 15th] drew fire when he refused to condemn a proposal honoring a Klu Klux Klan leader and Confederate general on a state license plate.

‘I don’t go around denouncing people. That’s not going to happen,’  Barbour, who is considering a run for the White House in 2012, said when asked about the plate, the Associated Press reported. ‘I know there’s not a chance it’ll become law.’

The state NAACP has denounced the proposal from the Mississippi Division of the Sons of Confederate Veterans to honor Confederate General Nathan Bedford Forrest, who went on to become an early leader of the KKK.

Forrest, a Tennessee native, is revered by some as a military genius and despised by others for leading an 1864 massacre of black Union troops at Fort Pillow, Tenn.

Forrest was a Ku Klux Klan grand wizard in Tennessee after the war.

Derrick Johnson, president of the Mississippi NAACP, ripped the planned license plate ‘absurd,’ blasted Forrest as a ‘racially divisive figure,’ and has called on Barbour to denounce the plan.

‘I find it curious that the governor won’t come out and clearly denounce the efforts of the Sons of Confederate Veterans to honor Nathan Bedford Forrest,” he said Tuesday. ‘As the head of the state, he shouldn’t tap dance around the question.’

The state-issued plate honoring Forrest would be released in 2014 if it is approved by the Mississippi Legislature.
The flap is the latest in a series of racially charged issues that Barbour has faced in recent months.

He ran into trouble when he told the Weekly Standard that growing up in Civil Rights-era Mississippi wasn’t ‘that bad’ — and defended his hometown Yazoo City’s White Citizens’ Council for keeping the KKK out of town. Barbour later clarified his remarks and called the council—also responsible for forcing some blacks to move and for working against educational integration—‘indefensible.’

After the story was published, he also pardoned two black women who were sentenced to life in prison for the armed robbery of $11.