Talking to my son about Troy Davis 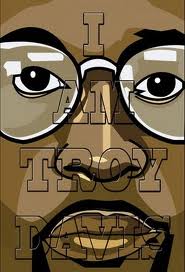 Tonight on my way home, I told my 13 year-old son that Troy Davis was put to death by the State of Georgia.  He immediately broke into tears.  I was taken aback by his reaction.  We were just coming from his school football game where he had an awesome tackle and we should have been focusing and having a joyous discussion about that.  But he asked me how my day went and when he was studying the constitution in school we had discussed Troy Davis and the right to a fair trial, so I thought I would let him know.

This is really a sad day for Troy Davis’s family, for all who are caught up in the INJUST justice system and for all children who are being taught about our constitution, especially children of color who need to learn that the constitution may work for some but not for everyone.  As an African American male, he needs to know that not only is he 6 times more likely to be incarcerated than his white friends but also 3 times more likely to be executed.

This has left my son questioning how the United States would execute anyone, particularly someone who might be innocent like Troy Davis – From the mouth of babes.  One might wonder how this could ever happen once, but it is a sad and awful truth that this occurs too many times.  This isn’t something he will learn in his history class.

Reflecting on our criminal justice system as a whole, it’s really difficult to know how to move forward especially after Justice Scalia’s statement: "there is nothing unconstitutional about executing the innocent” and in comparing two very similar situations where a black man is executed and a white man is given clemency, as in the recent post I’ve seen about Troy Davis and Samuel Crowe.   We have our work cut out for us.  This is not a time to revert back to our everyday life, but a time to stand up and shout that this is wrong and we are not going to stand idly by and continue to watch this happen.

In our work in the juvenile justice system in Louisiana we see far too often the hands of evil working against our children and families.  Far too often there is no accountability, from the Office of Juvenile Justice right up to the Governor’s office.  When shown the evidence that children continue to be hurt and neglected by the hands that are supposed to care for them and help keep them from entering the adult system; or even worse, when shown the fate that has befallen Troy Davis, too many times those in power turn a blind eye.

What is being said here is that it is ok when our system makes mistakes, ignores the law, ignores the constitution, and takes longer than necessary to reform. Apparently, we can just lock children up for making mistakes, we can beat them, we can fail them, we can incarcerate them, we can push them into the adult system, and even kill them.    Yes, we must keep up the movement, but it’s time that our movement includes action to get rid of those in power who continue to harm our communities!  Our children are counting on us to keep them safe, and they are counting on America to include Justice for ALL!

Editor's note: In the wake of Troy Davis's execution in Georgia, Bridge the Gulf asked a number of our contributors and leaders in the social justice movement to share some of their reflections.  This is the first of several pieces to be posted in the coming week.

----------
Gina B. Womack is the executive director and co-founder of Families and Friends of Louisiana’s Incarcerated Children (FFLIC), a statewide membership-based organization dedicated to creating a better life for all of Louisiana’s youth, especially those who are involved, or at risk of becoming involved in the juvenile justice system. Gina is the proud mother of three children, a member of Pleasant Zion Missionary Baptist Church and Sanctuary Choir as well the Joyful Gospel Choir. She is honored to be a 2006 Petra Foundation Fellow, 2009 Juvenile Justice Project of Louisiana Advocate of the Year and 2009 Ms. Foundation Women of Vision award (see Youtube Video). Gina is also a 2011 Alston Bannerman National Fellow.