The ABC's of the Growing Sinkhole  Emergency 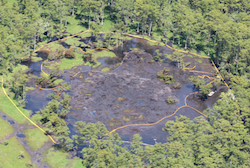 On August 3rd, a nearly 400-foot wide sinkhole opened up near Bayou Corne and Grand Bayou in Assumption Parish, Louisiana, turning cypress forest into a massive slurry-filled hole. Residents have been evacuated, and officials are scrambling to identify the cause and solution to the sinkhole. Are we watching a disaster unfold? Has anything like this happened before? When will evacuated residents be able to return home? Here are the ABC’s of the Bayou Corne sinkhole. (Photo by Cherri Foytlin.)

Assumption Parish
Assumption Parish is located in southeast Louisiana, near the Mississippi River on the industrial corridor, and has a population of nearly 30,000 people. Although the area is known mainly as a producer of sugar cane, several oil refineries and miles of pipeline define the area's landscape.

Bubbling Natural Gas and Tremors
For nearly two months prior to the opening of the sinkhole, the surrounding communities had been experiencing a strange bubbling of natural gas in the waters.

The initial speculation was that this was caused by one of the many pipelines in the area, yet independent tests found no gas leaks.

In addition, residents say they experienced tremors, which ranged in frequency from 20 to 100 per day, with small amounts of property damages being reported. At the time of the discovery of the hole, in early August, the tremors had suddenly stopped.

Cavern of Salt
The underground Napoleonville Salt Dome covers a surface area of three miles by one mile, and consists of more than 50 caverns. For two decades the caverns have been mined and operated by Texas Brine Company, the largest brine producer in the United States to provide salt based products for drilling operations.

The Bayou Corne sinkhole is directly over the Napoleonville Salt Dome, which is about 700 feet below the ground, with the cavern setting another 2,800 feet below that.

Naturally occurring salt domes, including this one, are also often used to store petrochemicals – including natural gas and butane – as well as oil industry waste. In fact, a portion of the nation's Strategic Petroleum Reserve is located in four of these sites along the Gulf Coast. 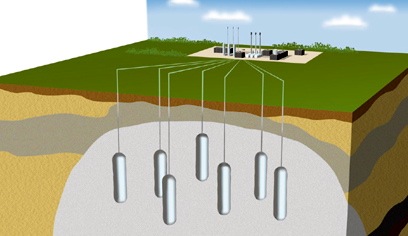 Illustration of a salt dome gas storage facility via LEANweb.org.

Evacuation
In an order issued by Assumption Parish on August 3rd, homes within “about a half a mile” from the slurry filled hole are now under mandatory evacuation. Which, according to Assumption Parish Police jury President, Martin Tirche, “is about 150 households, equaling 350 residents.”

Forty Days
When these residents can return is, at this point, a complete unknown. Residents hoped that the drilling of an observatory relief well, which began August 18th, would signal the beginning of the end of their nightmare. Yet, Texas Brine representatives stated that it would take 40 days to drill the well, and that's just to find out what is happening.

“That was real depressing to the people in the area because they had hoped to have some resolution a lot sooner than that, but they realize that the issue is: until they find out what's in that cavern.. you can't start making the situation right,” explains Dr. Wilma Subra, a chemist who is monitoring the situation for the nonprofit organization Louisiana Environmental Action Network (LEAN). “It's going to be much more than forty days.”

Governor Issues State of Emergency
Louisiana Governor Bobby Jindal issued an official State of Emergency on August 3rd (download), nearly two months after the Parish declared a Parish Emergency. Jindal’s move assigns control of the disaster response to the Louisiana Department of Homeland Security. Residents have invited Jindal to visit them in person to learn first-hand how the disaster has effected their daily lives and to assess the response effort. The Governor has yet to visit the community.

While concentrations of these chemicals are “below acceptable standards,” and state officials say the air monitoring reveals no health risk, LEAN says that cumulative affects are possible, and it is “worthy of tracking potential health impacts and continuing air monitoring.”   Residents have reportedly experienced headaches, respiratory problems, and eye irritation.

Industry Risk Assessment
A fact causing additional concern is that one of the storage caverns in the Napoleonville Salt Dome is storing 940,000 barrels of liquid butane, and lies a mere 1000 feet from the sinkhole. On August 14, the Louisiana Department of Environmental Quality called for an updated risk assessment by Crosstex energy LP, which owns the butane, that took into account a “worst case scenario.”

In response Crosstex concluded that the storage load is “little to no threat” to nearby citizens (download source). However, in what it calls “an abundance of caution”, the Dallas-based company said, “we have decided to make some piping changes and move product from the well closest to the slurry to the well farthest from the slurry to further alleviate any concerns from the public.” 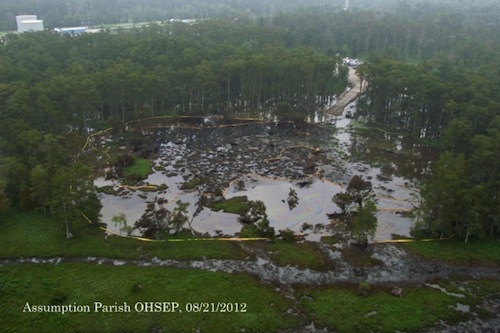 January 21, 2011
That’s the date when the president of Texas Brine, Mark J. Cartwright's, informed the Louisiana Department of Natural Resources (DNR), “about a failed integrity test of the cavern and company's subsequent suspicion that the cavern may have breached the Napoleonville Dome's outer wall, possibly explaining a loss of pressure in the cavern during the test.”

The Institute for Southern Studies reports, “Adding to the alarm is the fact that Texas Brine... received a permit from the Louisiana Department of Natural Resources in 1995 to dispose of naturally occurring radioactive material (NORM) from oil and gas exploration in the cavern...”

The DNR made the above information publicly known August 10, 2012, two days after its Secretary of eight years, Scott Angelle, unexpectedly resigned. Angelle is now running for Public Service Commission, which has been a political stepping stone for past Louisiana Governors.

Known Chemicals in the Sinkhole
Back at the hole, LDEQ performed water testing which revealed that the “slurry” was a mix of salt water, diesel and chemicals associated with diesel contaminates. Tests found the presence of naturally-occurring radioactive material (NORM), "but at concentrations well below acceptable levels.”

Lake Peigneur
In 1980, Louisiana faced another massive sinkhole above a salt dome, this one caused when a Texaco oil rig drilled through Lake Peigneur and into a salt mine below, by mistake. The drilling hole became a drain, pulling the 2.5 billion gallon lake and the Texaco oil rig into the salt cavern below. As a massive whirlpool formed at the surface, it pulled eleven barges, several surrounding buildings, and 65 acres of Jefferson Island land into the cavern.

Monitoring continues
Air, slurry, water and soil monitoring, provided by LDEQ, continues for the area. In addition, parish officials have initiated daily flyovers, which can be viewed here.

No Timeline
No timeline for the possible resolution of this issue has been given.

Oh! Let's try a relief well
On August 13th, the DNR signed the permitting for a relief well, after a review by the Office of Conservation's Injection and Mining Division, and insisted Texas Brine give regular reports on progress.

The permit was ordered by the Commissioner of Conservation, Jim Welsh, the week prior, threatening Texas Brine with a $5,000 per day fine if the permit was not immediately submitted.

According to the Louisiana Oil and Gas Association, the relief well is being drilled as an observational well, “from a company well pad about 1,000 feet from the sinkhole and (will) then use sonar equipment to probe underground conditions… to see what is happening in the cavern.”

Public Meeting
A community pubic meeting will be held today, Friday, August 24 at 6:30 p.m., at St. Joseph the Worker in Pierre Part.

Quick Rescue of Clean-Up Workers
As two clean-up workers skimmed diesel off the top of the sinkhole on August 16th, the sinkhole suddenly pulled 50 more feet of land into the slurry. The workers had to be rescued from their boat by air boat, and shortly afterwards the boat they had been skimming from was pulled into the muck below.

Relief Well Progress
Texas Brine's relief well began drilling on August 18th. To date, the initial 20-inch casing is in place, with the next step being the placement of the both 17-inch and then 10-inch casing, the latter of which will be driven into the cavern itself.

Second Evacuation
For some Bayou Corne residents, this is the second evacuation they’ve faced due to industry activity. In 2003, on the other side of the Napoleonville Salt Dome, a Dow Chemical storage cavern well sprang a leak, releasing contaminants into their homes. Families then fled their “explosive and toxic homes, with many relocating to the Bayou Corne area,” said   Dr. Wilma Subra in a recent radio interview.

Texas Brine Evacuation Payments
Texas Brine has set up a fund that will distribute a weekly housing allowance of $875 per household, and has been ordered by the state to also provide payments retroactively, considering households were evacuated weeks before payments began.

Updates
Assumption Parish officials have created a website on the incident, which is updated throughout the day.

Vanishing
Vegetation and nearby trees continue to fall into the widening chasm.

Worley Disaster Response
The company has been contracted by Texas Brine to handle the payments it will make to displaced residents. According to its website, Worley focuses on, “diversified risk management (regarding) claims, recovery costs and public relations backlash following a disaster.”

X Marks the Continuously Growing Spot
A common concern is, how big is the hole going to get? The answer remains unknown, as speculation varies. According to Dr. Subra, the hole should not grow past the 1400 feet diameter of the dome, unless other salt domes have been compromised as well.

You
In order to stay connected to events as they unfold, please keep following the story here on Bridge The Gulf, through the Louisiana Environmental Action Network, and at the Assumption Parish blog.

Zee Conclusion
The conclusion to this growing problem is yet to be seen, for now only questions present themselves: Will the relief well tell us anything? Taking into account possible cumulative health effects, how safe are the people of Bayou Corne and Grand Bayou? When will evacuated residents be allowed home? Who is ultimately responsible for this disaster? And who has the answers to make it right for the surrounding community? Answering these may require adding additional letters to the alphabet. As Dr. Wilma Subra said, one thing is for sure right now, “The hole will not be getting smaller.”