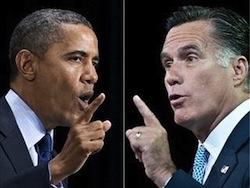 While Romney and Obama dance around race, the Gulf Coast continues to suffer devastating racial disparities, worsened by the government's inaction. By Rosana Cruz

New Orleans finally came up this week in the presidential contest – in a soundbite about race and the government's response to Hurricane Katrina. But before anyone gets too excited – the soundbite won’t do a thing to support our struggles for justice, equality, and safe, healthy communities on the Gulf Coast. It won’t help us build affordable housing, it won’t strengthen our struggling school systems, and it won't help reform our corrupt police departments. Our brief reemergence in national prominence won’t address other regional challenges that could desperately use national concern and intervention – not damage from Hurricane Isaac, the staggering mass incarceration of African Americans in Louisiana, coastal land loss, nor the ongoing health disaster wrought by BP’s oil.

Instead of talking about these very real and pressing racial disparities, the presidential campaigns on both sides have turned talking about race, and (barely) acknowledging racism, into the political version of the cooties.

We watched Obama-opponents use Katrina as a political football this week. A conservative website “released” a video from a 2007 speech by then-Senator Obama, in which he said things that most of us on the Gulf Coast don’t find too scandalous – that the federal government’s response to Katrina “tells me that the people down in New Orleans, they don’t care about as much.” But because the message was delivered to a Black audience and because it displayed the slightest acknowledgement that racial injustice is a national problem, conservatives used it, two days before the first presidential debate, to reiterate their idea that in "post-racial" America, any and all talk about race is divisive (especially when coming from people of color).

On Wednesday, we watched President Obama take the “post-racial” bait in a “post-racial” debate. In a 90-minute debate about the economy, neither the President nor Mitt Romney made a single mention of race, let alone discuss a plan to address the yawning economic and racial disparities in America.

While both parties take a cowardly and opportunistic approach to talking about race, the entire Gulf Coast, especially poor communities and communities of color, bear the brunt of very real racial disparities, which we need our next President to acknowledge, talk about, and fight.

Here’s just one conversation we can't have if our President won't talk about race: A conversation about the Stafford Act, which legislated how the government responded to Hurricane Katrina, and how it responds to all national disasters. In the supposedly inflammatory 2007 video of Obama talking about Katrina, he implies that the federal government applied the Stafford Act unequally – by waiving the requirement that local governments match a percentage of the federal funds after 9/11 in New York, but not on the Gulf Coast after Katrina.

What Obama didn't say is that the Stafford Act, even when it is upheld and used to the full benefit of disaster victims, still falls short. Survivors have no rights to the most basic emergency medical care or food. The government has total discretion whether and how to spend funds in the wake of a disaster. As Advocates for Environmental Human Rights has been arguing since Katrina, disaster survivors in the United States would have many more rights and protections if we adopted principles used by the United Nations which ensure the right to recovery for people in similar situations in foreign countries. Adopting a rights-based approach to disaster recovery would benefit all communities in the U.S., not just communities of color.

Obama wasn’t saying any of this in that 2007 speech. He wasn’t calling for what we really need - a change in the Stafford Act. He was simply calling for the equal application of the Stafford Act. Now, in this 2012 political contest, even that position is being recast as extreme. This is the dynamic of how we talk about race. Over the past few decades, real conversations about race have been pushed underground. It’s gotten even worse in “post-racial” America, when even the most basic calls for racial equity made by Senator Obama of 2007 are being cast as extreme for President Obama of 2012.   This public discourse on race is incomplete and dishonest, and it doesn't bring us closer to a more democratic and inclusive America. On the Gulf Coast, it doesn't bring us closer to justice or recovery.

Until 2008, we had never had a President who could have seen himself reflected in the faces of people stranded on roof-tops after Katrina, or in the bodies shot down on the Danziger Bridge. When Senator Obama voiced his anger over the Stafford Act and the government’s response to Katrina, he showed he was someone who could empathize with our experience in New Orleans and on the Gulf Coast. Since 2008, our President seems be too hamstrung  to do much with that empathy, and he has shied away from even talking about racial equity. In 2012, empathy and understanding are just too politically risky.

Ultimately, it’s on us to push both candidates to be more honest, and it starts with being honest ourselves. We must tell our stories – about our lives, our experiences, and how they've been shaped by racial inequity and injustice. We must acknowledge people's suffering and anger, and insist on remedies that address root causes.

In New Orleans, on the Gulf Coast, and in communities across the country that were excluded or ignored in the debate this week – we can’t let our experiences be reduced to soundbites for someone else’s political gain. That means saying we still have a race problem, and that problem continues to fester each day we, our elected officials, and the media, buy into the fantasy of post-racialism.