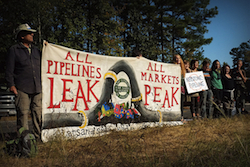 If TransCanada has its way, almost 1.1 million barrels of tar sands oil - the world’s dirtiest, most toxic, and most difficult-to-clean-up-when-it-spills oil - will roll down the Keystone XL pipeline to the Gulf of Mexico.

As TransCanada pulls out all the stops in the now under construction southern leg of the project, already they have executed some dirty punches and low blows, ensuring their name is added to a dubious list of corporate big-polluters, including BP, Dow, ExxonMobil, Texas Brine, Shell and others, who continue to use our beloved Gulf Coast as the nation's Energy Sacrifice Zone.

And so while the corporations continue to poison our bodies and pollute our communities, our supposed representation continues to ignore the needs of our people. Meanwhile, both Presidential candidates continue to debate the future of Big Bird, while neither has had the courage to address the real issues of the Keystone XL or the climate change.

Lucky for the side of righteousness, a small group of courageous folks in East Texas have stood up and they have courageously said, "No more!"

The Tar Sands Blockade has been vigilant in their campaign of non-violent protest of this pipeline, and in doing so, these modern day patriots have also been protecting our freedoms. By building and refusing to leave tree house villages, chaining themselves to equipment, and working with landowners who wish to meritoriously exercise their right of ownership, they have valiantly defended our Gulf Coast; as well as our nation's constitution.

Sadly, local law enforcement, most often following TransCanada's orders, have not acted to protect the rights of our citizens. They, and those they represent, have repeatedly decimated the constitutional right to land ownership, the right to assembly, the right to freedom of expression, and most importantly our right to defend ourselves from a foreign invader.

For all their effort to practice non-violence as a means for social change, protestors, have been met with beatings, taserings and even lawsuits. They have been arrested on private land on which they had permission to inhabit, as well as in public ditches alongside the Texas highway. 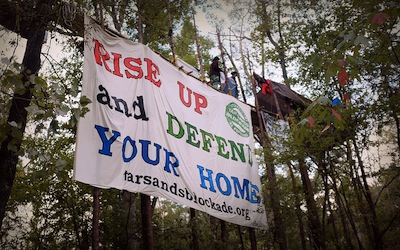 According to Ramsey Sprague, a Tar Sands Blockade spokesperson who was recently arrested for the Class B Misdemeanor of "obstruction of a state highway or passageway," while photographing other protestors from a road side ditch in Franklin County, Texas, “They maneuvered to block our view, by [putting] up a sheet, the sheriff did -  to block folks from seeing what they were doing.  [Protestor] Gary Stuart was locked to an elbow shaped piece of piping. Once they had the sheet up, officers started twisting his arm....then they began man-handling Gary, to the point that he thought they were breaking his arm.”

To add insult to literal injury, many of those arrested have been served with a notice of impending legal action by TransCanada, which includes restraining orders, and prohibiting of the defendants from "interfering with, obstructing or otherwise infringing, in any way, Keystone's use and enjoyment of the the Keystone Right of Way, including without limitation, physically occupying the Keystone Right of Way in an attempt to prevent Keystone from undertaking construction activities or otherwise exercising its rights of use and possession."

That's right - TransCanada, which often used questionably legal strong-arming and intimidation to force landowners to let them put the pipeline through their land in the first place, is now claiming, as in the case of 78-year old Eleanor Fairchild, that she is interfering with TransCanada's "use and enjoyment" of that same land.  Recently, Fairchild was arrested, along with actress Daryl Hannah, for trespassing on her own land. And in spite of their careful use of non-violent direct action to stop TransCanada's destruction of land and trees, it is the protesters who have been labeled "ecoterrorists" in legal proceedings. 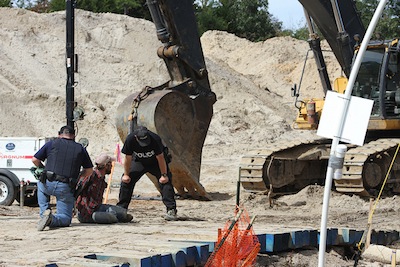 Police arrest a protestor in the Tar Sands Blockade.

These type of lawsuits, commonly known as Strategic Lawsuits Against Public Participation (SLAPP), are often used in order to silence critics and dissuade citizens from exercising their right to assemble and their freedom of expression. In June 2011, Texas passed the Texas Citizens' Participation Act, one of the strictest anti-SLAPP statutes in the nation, making it more difficult for plaintiffs to win such suits.

While it remains unclear what legal ramifications protesters will face, Sprague, those occupying the tree village and other protesters aren't backing down. "We are undeterred by this type of SLAPP suit. The intention is to stifle this type of protest, yet we have grown exponentially. The reality is that we are a growing movement, fully committed to maintaining as a campaign through civil disobedience and escalation tactics, a nonviolent civil disobedience frame work,” he explains. 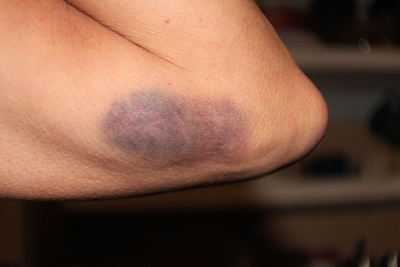 A protestor displays her bruise from rough police handling.

All photos courtesy of the Tar Sands Blockade.