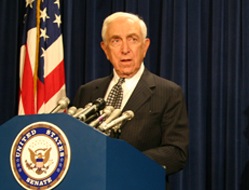 Last Thursday in Lake Charles, Louisiana, U.S. Senator David Vitter of Louisiana was asked by Ms. Dorothy Felix, a resident of Mossville, why he sponsored a legislative revision of the Safe Chemicals Act that cut out important provisions in the bill. Senator Vitter’s revised bill weakened proposed requirements for testing chemicals to ensure they are safe before they can be released into our environment and put into products. His bill also eliminated standards for protecting communities exposed to toxic chemicals. Instead of answering Ms. Felix’s question, Senator Vitter side-stepped divulging his reason for carving up a bill that would protect her life and the lives of people across the country suffering from toxic chemical pollution. (Watch the one-minute exchange between Ms. Felix and Senator Vitter here, starting at 3:45 into the news video.)

For eight years, Frank R. Lautenberg (pictured), a U.S. Senator from New Jersey, pushed for the passage of the Safe Chemicals Act and introduced other legislation to protect communities from hazardous industrial accidents. He died on Monday at the age of 89. Though he did not live to see the Safe Chemicals Act become law, Senator Lautenberg leaves behind a legacy of legislative advocacy in defense of our human right to live in a healthy and safe environment. Just days before he died from viral pneumonia, Senator Lautenberg was approached by Senator Vitter to co-sponsor the revised bill, known as the Chemical Safety Improvement Act. The co-sponsored revision by Senator Lautenberg, a Democrat, and Senator Vitter, a Republican, has been celebrated as a rare bi-partisan achievement. However, it is unclear whether Senator Lautenberg actually believed the gutted version of the bill was something to celebrate or a last ditch effort to get something passed into law that offered the possibility for improvement in the future.

What is clear is the focus on communities in Senator Lautenberg’s tireless advocacy for strengthening environmental laws. He understood that what makes our hyper-technical environmental laws inadequate and ineffective is that they neither prevent nor remedy the human suffering caused by exposure to the myriad of toxic chemicals daily released by industrial facilities, each one carrying the ever-present risk of an accident that can kill and severely injure people living nearby. He did not have to go beyond the borders of New Jersey to realize that this human suffering is multiplied by the number of people who compose a community located in the shadow of a smokestack or downwind from a dumpsite. 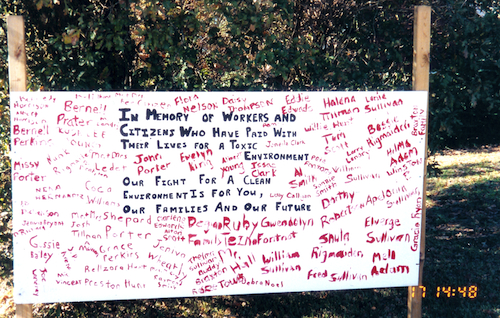 Photo from a memorial in Mossville, Louisiana: "In memory of workers and citizens who have paid with their lives for a toxic environment. Our fight for a clean environment is for you, our families and our future." Courtesy of Advocates for Environmental Human Rights.

Senator Lautenberg’s experience in the heavily industrialized residential communities of New Jersey may have compelled him to push for community-oriented environmental legislation. Yet, the experience alone does not fully explain the legacy he leaves behind. Like Senator Lautenberg, our Gulf Region legislators at Capitol Hill represent districts in Texas, Louisiana, Mississippi, Alabama, and Florida that include areas bearing some of the worst environmental scars in the nation inflicted by industrial operations. These legislators represent people like Ms. Felix, who work to achieve environmental justice in order to overcome the racism and injustice of being daily assaulted with toxic chemical pollution. However, the majority of our legislators are among the most vocal lawmakers in the U.S. House of Representatives and Senate who advocate against strengthening environmental laws. (Can anyone seriously argue these lawmakers are not included among those described by President Obama in his second inaugural address as denying the overwhelming science that climate change is real?) And, regardless of party affiliation, these legislators are the loyal defenders of industrial corporations that poison our environment and damage our health.

Monique Harden is an Attorney and the Co-Director of Advocates for Environmental Human Rights. Since 1996, Ms. Harden has provided legal counsel and advocacy support that have helped community organizations win important environmental justice victories. In 2003, Ms. Harden, along with Nathalie Walker, co-founded Advocates for Environmental Human Rights. Ms. Harden is a graduate of The University of Texas School of Law (1995), and received a B.A. from St. John’s College (1990). Ms. Harden has authored and co-authored numerous reports and papers on environmental justice and human rights issues. Her advocacy work has been featured in television, radio and print news, as well as books, magazines, and documentaries.