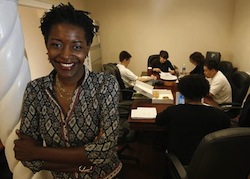 Crossposted from The Louisiana Justice Institute's blog.  Image from the Times-Picayune.

Is it me, or does it seem like every time the people of Louisiana are imperiled by a disaster, the Feds’ “fix” is dispersants? I think we have a dispersants problem.

Hear me out. Remember Katrina?

The Feds sprayed charter school dispersants on and dismantled our public schools system, and expected that would make failing schools and undereducated kids disappear.

The Feds sprayed affordable housing dispersants on and demolished our public housing, and expected that would make dilapidated housing and concentrated poverty disappear.

The Feds sprayed private care dispersants on and shuttered our pubic hospital, and expected that would make indigent healthcare disappear.

Now, the Feds have sprayed chemical dispersants on and further contaminated our gulf waters, and expect that will make the oil spill disappear.

Hmmm...let’s see: We still have failed schools and undereducated kids and, because of the charter-school dispersants, we now have a juvenile crime crisis.

We still have an oil problem in the gulf and, because of the chemical dispersants, we now have a looming public health crisis.

Hey, Feds – NEWS FLASH: There is no magical elixir for the man-made problems that ail us. No matter how much you spray, these problems don’t disappear, they simply resurface, with unintended consequences.

So don’t ‘sperse me, bro! Ask us folks directly affected by these problems how to solve them. Hell, we can’t do worse than DOE, HUD, DHH, or EPA/BP. Seriously.