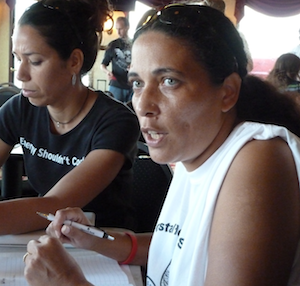 Okay, ladies and gents, for 6 months now I have seen you. Toiling away, sharing information, doing what you can to make an impact of some kind over this horrific event.

I see your heart. I have felt your spirit. And I say the time is now, to make a statement across the Gulf.

If you are having syptoms of poisoning resulting from the spill call:

P.S. I suggest that everyone in the other Gulf states make and share similar lists. If you are not in that Reps district say "I am not in your disctrict but I have friends who are and we both demand action on these issues."

Cherri Foytlin is an oil worker's wife, mother of six, Louisiana resident and journalist whose family has been deeply impacted by the BP Gulf Oil Spill and consequential moratorium on deep water drilling. She has been a constant voice, speaking out to the Obama Administration's Gulf Oil Spill Commission, and in countless forms of media. On July 15, 2010, in a CNN interview, she called out to the president for help, but was unanswered. She has also spoken at "The Rally for Economic Survival" and at the "Spill Into Washington Rally" in Washington D.C.where she challenged the American people to get involved in what she sees as an "atrocity on the shores" of the Gulf Coast. In addition, Cherri has written and illustrated a children's coloring book on coastal errosion. Cherri will continue her fight for the industries, people, culture and wildlife of south Lousiana and the Gulf Coast "until we are made whole again".  Read more posts by and about Cherri here, here and here.