Will Alabama beaches never be the same?

A very special thanks to Project Gulf Impact for their assistance in making my work possible.
http://www.projectgulfimpact.org/

This video covers 8 months of impact from the BP Slick and most recently, a walk with Pam Batson, Mobile resident, along the Dauphin Island East Beach 12/11/10.

I had never seen the beach in such bad condition overall.
Heavy equipment was working in 6 locations along the beach sifting, and excavating all but the dune areas of the entire island coast.

I fear this is only the beginning. Nowhere in the impact area will our shores be the same in my lifetime. Our beautiful Alabama beaches may never be the same.

Will Alabama Beaches Never Be The Same?

As we walked along the beach close to the tidal pools high on the beach I could see a brownish orange material covering the sand. There was a heavy foam in the tidal pools that was the same color as the tainted sand surrounding them. The wind was pretty heavy so it was difficult to photograph but I thought could detect a possible sheen around the edges.

Thick black mats of material covered parts of the beach as much as an inch think with a rubbery substance she said had been described as "Organics" by the US Coast Guard. I won't disagree with the USCG since the slimey mess did have a greenish tint to it when kicked open, but will someone answer the question, why so many square acres of it an inch think on an island noted for it's white sands?

Walking out to the incoming surf, I encountered heavy brown foam and the scent of petroleum periodically. At one point the sun broke out a little and I was able to get the distinct rainbow colors of petroleum on the water.

The foam along the shore was heavy and brownish orange similar to what I became accustomed to seeing in Barataria Bay washing ashore along those islands as well.

On the leeward side of the island there was a bevy of activity. Everything from heavy equipment to minnow net strainers was being used to remove tarballs found everywhere. A large scale sifter and conveyor system was in use being loaded from a track hoe atop a huge pile of sand and loaded on trucks where it is being deposited on the beach as new dunes.

Several such sifting operations were set up along the beach from East to West.

I know something has to be done but this to me looked a lot like blending the dispersed oil balls into the sand and spread out.
Many places where I kicked up the sand, the orange and yellowish material was just under the surface.

I don't think our Alabama beaches will ever be white again in my lifetime, if ever. BP should be held to no time lines when it comes to accountability. This is going to keep coming for years to come and no amount of high dollar ad campaigns are going to change that.

One thing that flew in my face and frankly made me want to throw something. While our Alabama fishermen are out of work and in dire need of help, BP contractors have the gall to bring in workers from Texas with who blatantly fly their Texas flag while taking Alabama jobs! 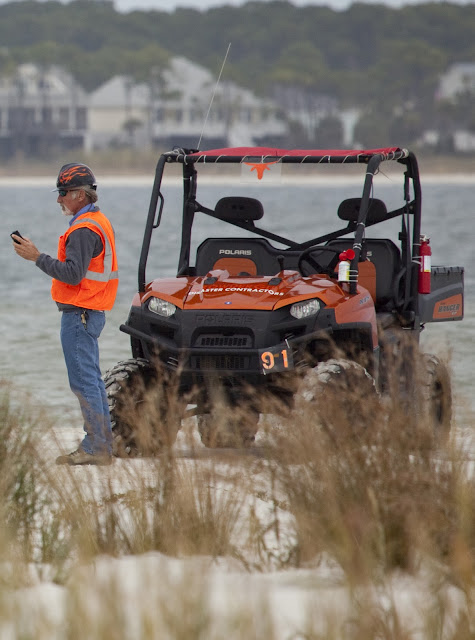 The Gulf of Mexico, in my opinion is a toxic soup of god knows what and what it's life span will be no one can possibly predict. Years into the future we are going to be still hearing of new oil slicks and new unexplained illnesses along our beautiful Gulf Coast.

From Florida to the shores of Texas, no community has been spared to some degree. Some had heavy oil, some none at all but the impacts were much more far reaching than the shore line and wildlife. It's time for a united Gulf to take on the taunting task of holding both the government and BP accountable for what I see as an assault on our civil rights to live and prosper in a safe clean environment, regardless of political or financial status! All must be accounted for, both human and those in the wild.

Will our beaches NEVER be the same as before April 20, 2010 is a question for future generations I am afraid.