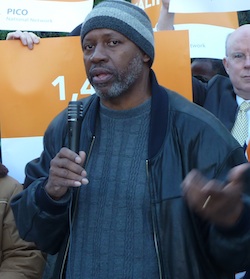 By Parnell Herbert, orginially posted on Justice Roars.  While sitting with Norris Henderson upstairs at the RAE House, I couldn’t help but marvel at his calm, composed demeanor. Here is a man who served many years of his life at the Louisiana State Prison at Angola, a place that was once known as the Bloodiest and Most Brutal Penitentiary in the United States. And here he was talking to me about what we can do to try to stop our young African American males from killing each other. Norris is a selfless man and a giving individual who wants nothing more than to find ways to help others and to make the world a better place for us all.

Parnell Herbert: Norris, tell us a little about yourself and your organization.

Norris Henderson: I am a native New Orleanian and Director of VOTE “Voice Of The Ex-offender.” We work with the base population of people reentering society. Originally our focus was to organize Formerly Incarcerated People (FIP) around their right to vote. In this state FIPs do have a right to vote, and VOTE made that our rallying call. When people are civically engaged, they believe they are a part of something. They feel more involved.

PH: Sure, you mean you have something to say about what goes on in your life.

Norris Henderson: Yes. We have learned throughout this nine year process that there are collateral consequences that come with being formerly incarcerated, such as limited employment opportunities, lack of decent affordable housing, inadequate health care… For the past ten years Louisiana has led the nation in per-capita incarceration and New Orleans leads the state. Question is “Do we have bad boys or do we have a bad system?” Socio-economically the largest numbers of people of color to come out of that system are worse off than they were when they went in. We have created a vicious cycle. People can’t find a way to get off of it or out of it. Retaliation is Perpetuation applies not only to young Black males killing each other it, also applies to the system.

PH: You mean a perpetual cycle of poverty?

PH: We know that prison perpetuates itself. While it does nothing to prepare inmates for their release, prisons remain prepared for their anticipated return. Our Governor Piyush Jindal is trying to sell a couple of prisons. We know that prisons are more than brick and mortar and bars. It is also people. When you sell a prison you sell the inmates, you sell human beings and that is called slavery.

Norris Henderson: In theory they say “You have paid your debt to society.” In this state “Revised Statue 37” addresses professions and occupations. It prohibits FIPs from getting 70 types of licenses. You could have been the best barber in the pen but when you come home you can’t get a license. They have complicated the process of expungement and made it cost prohibitive.

PH: You mentioned registering FIPs, but don’t you also register people while they are incarcerated?

Norris Henderson: Yes. That is one of the best kept secrets. A pre-trial detainee remains eligible to vote. As long as you are not under conviction, probation or parole you maintain your voting rights.

PH: That also explains the hospice program in Angola. When asked why they don’t release these harmless, dying old men to go home and die with their families, it is because the prison and their parish continue to benefit from that inmates physical presence.

Norris Henderson: The program itself is a good one. It was needed because people were not getting out. They were dying in there and the quality of care was deplorable. We have some of the harshest laws and sentences in this country. When they increased the sentencing in Louisiana, crime increased. Because sentences were so harsh people did everything they could to avoid capture, which includes killing people to avoid conviction.

PH: I have read that over 85% of Angola’s inmates will die there, so there is little rehabilitation.

PH: Wow, I love that term “Self- rehabilitation.” Will you explain to us what that means?

Norris Henderson: Well it’s like “Each One Reach One. Each One Teach One.” Academically challenged individuals are encouraged by older inmates to get their GED and use this time to advance themselves in preparation for release.

PH: One of the things we want to discuss is how the system is set up for young Black males to do something dumb in the streets so they can take you off of the streets and benefit from your presence while incarcerated. Many of these young men depend on their weapons and their boys in the streets. What happens when the boys are not around and weapons are no longer available behind those prison doors?

Norris Henderson: Attitudes change immediately because you realize, this is a different playing field. No AK, no Uzi, no Mac… You are now in an environment where no one is afraid of you because they have done what you have done and worse. They realize very quickly I have given up so much for so little in return. If they have no kids there is no legacy. The world will never even know you were here. Your girlfriend drops off, your boys drop off there is no one to call no one answers your letters. You are alone and will someday just cease to exist. Retaliation is Perpetuation is so true. It’s like you kill my dog, I kill your cat. At the end of the day no one has a pet.

Norris Henderson: We have to create opportunities. Crime is about economics. Murder is the most serious. We have to get them to stop trying to come up on each other. In the game the hunter becomes the hunted. When you are out there hustling you have nothing. But the minute you come up you become the hunted. I know this personally because I lost a son to it. The people directly impacted will have to step up. When my son died his boys said “The streets are going to run red.” Standing in front of my sons casket dressed in prison garb and shackles I said “No. It stops here.” His friends had to respect that. God is the best planner. Everything happens for a reason. Someone directly impacted has to make that statement “It stops here” and others have to respect that.

PH: We discussed the use of the word “Madness” and I agree with you. Our kids are not mad. They are not insane or crazy but they do some dumb stuff. The most dangerous man alive is the one without hope. He feels he has nothing to lose and basically nothing to live for. We have to show them there is hope. Norris you and I came from the same place many of them are from and we are still here living proud and productive lives. We need young people to get that feeling of hopelessness out of their minds. As long as you are alive there is hope. “Don’t give up - you are not hopeless and this is not a hopeless world in which we live."

Norris Henderson: Seeing something better about you is hope. Hope is a good thing. You’ve got to have hope. If you don’t have hope you are just giving up on yourself. You have to be hopeful that you can achieve your objective in life.

Parnell Herbert is a recently returned New Orleanian who was previously displaced to Houston by Hurricane Katrina. He is active on many social justice causes, including the right of return for New Orleanians, and freedom for the Angola Three. His new play, Angola Three, has been performed in New Orleans and other cities.