Alabama brings back slavery for Latinos 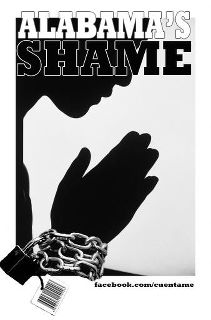 Here's how: pass a draconian immigration law, lock up 'illegals' in private prisons, then get the new inmates to work in the fields. By Axel Caballero, originally published by The Guardian. Several days have now passed since Alabama's anti-immigration law, the harshest and most abusive in the nation, came into full effect. HB 56, a de facto criminalisation of migration, replaces any sensible immigration policy with the favorite solution these days: let's put them behind bars– and we might as well make a profit out of it.

The negative consequences of such shameful legislation have been felt immediately. Within hours, it had claimed its first victims – from the detention of a man who later turned out to be residing legally, to the massive fleeing of migrant workers and school children, to even cutting off water services to families or individuals who can't prove their legal status. It is the most draconian and oppressive set of provisions that this country, which claims to be the bastion of liberties and rights, has seen since the era of segregation.

Because anyone lacking the proper immigration papers is considered to be committing a crime, also entering into a "business transaction" with the individual in question would prompt criminal charges. The pressure to enact and enforce anti-immigration law has left state and local police officers and government agents and officials in a bind. Already struggling to meet demands, with shortened budgets and staff, these agencies must now devise ways to comply with the new set of measures. And at present, these often lead to confusion as to when, how, where and to whom to apply the law.

A consequence of this chaos, though, is that we're seeing absurd and flat out racist applications of the law. A hotline set up by an immigrant protection group has received more than 2,000 phone calls from families in dire need. The pleas range from mothers trying to place their children in safe protection while they look to flee the state, to students being questioned at schools and accounts of abuse and harassment. It is not clear yet how many have been or will be arrested under this provision, but the number will surely make one sector happy: private detention facilities.

Read the rest of this post at The Guardian