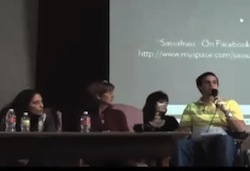 By Ada McMahon and Liana Lopez, videos by Bryan Parras.  Alarming levels of toxic chemicals from the BP disaster have entered the blood of some Gulf Coast citizens, who are showing symptoms like internal bleeding, kidney infection, muscle atrophy, pain, headaches, and bleeding from the ears.    At a community forum last Saturday in New Orleans, Dr. Wilma Subra presented these results and more based on months of testing from the Louisiana Environmental Action Network.

Several Gulf Coast residents from the study discussed their symptoms, and expressed their fear, sadness, and outrage at the lack of health care and attention the health crisis has received.

Did BP cause this man’s seizures?

Paul Doomm, a 22 year-old from coastal Navarre Beach, Florida, was one of those to speak out. He has not yet received his blood test results, but has become wheelchair-bound since swimming in the Gulf and eating seafood this summer.  He attributes his ailments, which include chronic seizures, constant headaches and pain, vertigo and partial paralysis, to the BP disaster. He says that none of the 93 doctors he’s seen in the past months have found a definitive cause. [Read more about Paul from Bridge The Gulf contributor Rocky Kistner].

Just minutes after telling his story to the crowd of roughly 100 at the First Unitarian Church in New Orleans, Paul’s eyes began to dart around in his head and the right side of his body began to seize and shake.  Several men rushed to his side to help his mother carry Paul and his wheelchair off the stage.    Panelist Cherri Foytlin broke the stunned silence.  “Can we get some prayers?,” she called out, then led the room in prayer.

For several minutes Paul embodied the health crisis facing most in the audience, and an estimated 4-5 million others across the Gulf Coast.

You may also watch a video of Paul's seizure here, starting around 6:22. Some may find this video disturbing.

These chemicals are found in crude oil and in Corexit, a chemical sprayed on the oil to disperse it.  Now, LEAN’s testing reveals they are also found in very high levels in Gulf Coast residents’ blood. The subjects of the tests were selected because they are ill with symptoms that match chemical poisoning.

Dr. Subra reported that on average, the people in her study have benzene levels at a whopping 36 times the levels you would find in a normal population, and ethylbenzene 5.7 times that norm.

Based in New Iberia, LA, Dr. Subra is also the recipient of a MacArthur Genius Grant and advisor to the Gulf Coast Fund for Community Renewal and Ecological Health.

Denise Rednour of Long Beach, MS, whose blood tests show elevated levels of toxic chemicals, spoke of the, "undeniable emotional and physical toll" the BP disaster has brought to the people along the Gulf Coast.

Rednour’s symptoms began with extreme headaches, nausea, dizziness, confusion, and burning in her eyes and throat, “as if,” she said, “I had been maced as I approached the water line.  Soon to follow were the skin lesions, excessive dehydration, blistering of my feet if they got wet, diarrhea with mucus, lethargy, intense muscle atrophy and pain, and bleeding from the ears.  It has then progressed to internal bleeding and bruising, loss of muscle mass and coordination, kidney and bladder infections, and more."

Rednour and other panelists reported that many doctors, who need to sign off on blood tests, are of little help. If you request chemical testing, she says, "you are treated as though you are a crackpot, and overly dramatic and imagining things.  You are prescribed sedatives and doped up, told to go home, relax, forget about it, have a drink… it's in your imagination."

Like Rednour, Cherri Foytlin found her doctor to be of little help. The part-time journalist, wife of an oil worker and mother of six became ill this summer as she was documenting the BP disaster.  Foytlin recounted that her doctor, "said it was the worst case of bronchitis he'd ever seen,” then flat-out refused to give her a test for chemical poisoning.    "He looked me in the eye and said, 'That can't be it. That's not it.'”  But the LEAN study proved him wrong, revealing that Foytlin has elevated levels of six out of the 10 toxins they tested for in her blood.  Her ethylbenzene levels are 2.5 times the norm.   Foytlin says her doctor won’t see her anymore.

“Some people, you can see the scars and lesions and staph infections.  You can see the pus oozing out of their sores.  And others, they just walk about carrying little tiny time bombs in their veins, ticking their way towards hospital beds and long goodbyes…

Too many times I've come home to a phone call, to know that my friends are in the hospital, or that their babies have a cough that won't go away, or that their spouses have thrown up every night for weeks, or that their children have a rash, or that their family pet has passed.  There have been too many sleepless nights wondering, ‘What can I do that will make one frickin' bit of difference here?’

Watch a video of the panel here.

The panelists’ frustration with doctors, BP, and government officials comes after months of speaking out at public meetings, asking whoever will listen to address the health crisis. They say the Environmental Protection Agency, Kenneth Feinberg, elected officials, the President’s Oil Spill Commission, and others have all failed to adequately address the growing health crisis.   Instead, officials seem eager to declare a tidy end to the BP disaster.

Ken Feinberg, who is administering the $20 billion fund to compensate residents and business for economic losses, said last week that the Gulf will be fully recovered by the end of 2012.  Dr. Subra disputes this rosy estimate, saying the effects of the BP disaster will last much, much longer for the Gulf’s ecosystem and people.

Dr. Subra pointed out that as of mid-September, the amount of oil left in the Gulf was more than four times the amount spilled in the Exxon Valdez disaster, and that is just according to official estimates.  On top of that nearly 2 million gallons of Corexit have been sprayed (also by official estimates).

In Dr. Subra’s words, "The environmental and human health impacts of the BP spill will last for generations.  This is what we have to look forward to."