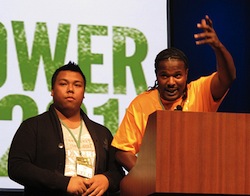 Last night in Washington D.C., a BP clean-up worker and the son of a Vietnamese fishing family spoke to thousands of fired-up youth leaders.  Tony Nguyen and Andre Gaines were representing a diverse contingent of over one hundred people who traveled to Power Shift 2011 from across the Gulf Coast. They shared a unified message at the youth climate summit: the BP oil disaster is not over.

Tony Nguyen: "We rely on the Gulf"

Hello everyone. My name is Tony Nguyen, and I am from Biloxi, Mississippi. Biloxi is located right on the Gulf of Mexico, and my parents immigrated from Vietnam to pursue a better life.

Everywhere you look there are beaches, wildlife, marshes, and just nature at its finest. And being so close to the Gulf, my family, my friends, my community, we rely on the Gulf to provide food, jobs, and a structure to life. Fishermen go out for weeks at a time on their boats in the heat to provide for their family.

But it's the only way for them, and now they are struggling to even do that. A year ago, the BP oil disaster began.

How many of you have heard about the oil spill?

How many of you have kinda, sorta, stopped thinking about it?

We're led to believe that this disaster is over.  The media has portrayed this as something that has been resolved, but it's not.

Power Shift 2011, we need your help.  We need to hold these companies accountable.  BP needs to clean up the disaster.  Congress has passed no legislation since the disaster to regulate oil companies and their impact.

But look.  We have a room full of thousands here today to voice our demands.  Tell Congress, tell the President, tell BP to clean up and restore the Gulf Coast.

Although the Gulf Coast may never full recover, we still can act now to help provide accessible health care, to create sustainable jobs, and to make BP pay for what they've done.

Andre Gaines: "My experience on the clean-up was shocking"

I put my education on hold when the BP oil disaster began to earn money to support my children.  My experience on the clean-up was shocking, to say the least.  I've watched people get ill from breathing the fumes of the oil and dispersants. One afternoon, in 100 degree plus heat, a woman started uncontrollably vomiting and had to be taken to the hospital.

I myself was hospitiaized for two weeks for severe vomiting and not being able to breathe due to my own exposure to oil and other contaminants.

I have supervised people that did not have proper training or equipment, such as respirators.  We were performing jobs that have serious health hazards, without regard to our safety.

Wednesday is the one year anniversary of the BP oil disaster, and the job is still nowhere near complete.  There is still oil in the Gulf Coast, contaminating wildlife and people.  I am here to request, better yet, demand, that Congress, President Obama, and you the people help us in our fight to clean and restore the Gulf Coast.

There are a hundred people from the Gulf Coast, please stand up and be recognized!

Tell BP it's time to make it right. 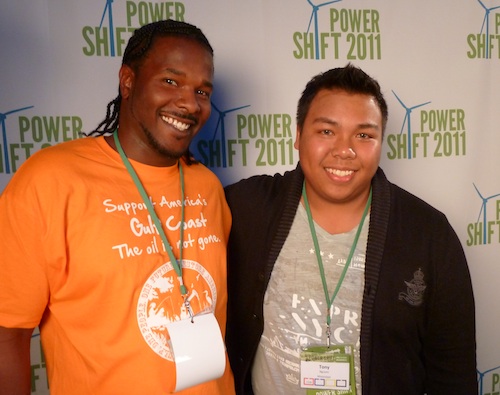 Read more: Power Shift; Where Youth Fight for our Future