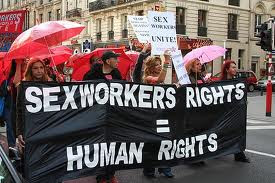 Crossposted from Justice Roars.
Baton Rouge-area politicians recently released a plan to increase jail time and other penalties for accused sex workers, including a 90-day minimum sentence. Louisiana is already the only US state that forces sex workers to register as sex offenders, and this call for increased criminalization has raised alarms among advocates. Below is a response from the ACLU of Louisiana:

I understand that a committee of the Metropolitan Council is urging a crackdown on prostitution in East Baton Rouge Parish. According to the Advocate, an ordinance has been proposed to impose a mandatory sentence of a minimum of 90 days in jail or supervised probation, as well as "john school" for customers.

I write to urge the Council to exercise great care in enacting laws that will penalize poor women in ways that might ultimately harm the community. Sending nonviolent offenders to jail is widely recognized as the wrong approach to criminal justice, and one that will not only increase costs for the people of Baton Rouge but also ultimately increase crime. Seeking to change Louisiana's status as the largest per capita jailer in the world, Gov. Jindal recently requested the Pew Center for Study on the States to assist in enacting reforms that will decrease the incarceration rate while maintaining public safety. Careful study is necessary before adopting any laws that will further incarcerate or punish anyone for whom alternatives are available.

The Advocate suggests that one stated purpose of the proposed ordinance is to eliminate human trafficking. However, the ordinance will do nothing to stop trafficking, because the traffickers themselves are not affected. This is a classic case of punishing the victim, by imposing punishment only on the woman who has been trafficked. In fact, criminalizing prostitution can hurt victims of trafficking by steering them away from the police when they need help. Fear of arrest can send a victim of violence further away from support services that can help her. Trafficking, and forcing juveniles into "modern day slavery," is already a crime, subject to state and federal laws. This proposal will do nothing to stop any trafficking that might occur and can hurt those victimized.

The article also states that the proposal includes adoption of "john schools" to teach customers about the "destructive impact of prostitution." Yet studies have shown that "john schools" and programs to reduce demand for prostitution frequently target low-income and minority men, and are not successful in protecting women or in eliminating prostitution. The Best Practices Policy Project reports, among other things, a higher than average recidivism rate among men who have been subject to "john schools." Moreover, these programs may increase violence against women, and therefore cause more harm.

Nor will this stop the spread of HIV/AIDS. A jail sentence will do nothing to protect a prostitute from contracting HIV from a client, or vice versa. The solution to the HIV/AIDS epidemic is better treatment, education, and condom use, not incarceration for those living with the disease.

I urge the Council to consider this issue carefully, to consult best practices and experts nationwide on the both the criminal justice and the public health implications of incarcerating sex workers and their customers, and to be mindful of the dangers of incarcerating more people for nonviolent offenses.